Trump reminds me of that old cartoon character, Crabby Appleton. He’s rotten to the core.

Crabby Appleton was the main villain of Tom Terrific that appeared on the Captain Kangaroo children’s television show that ran from 1957 to 1959. The charcter’s slogan was “I’m rotten to the core!” 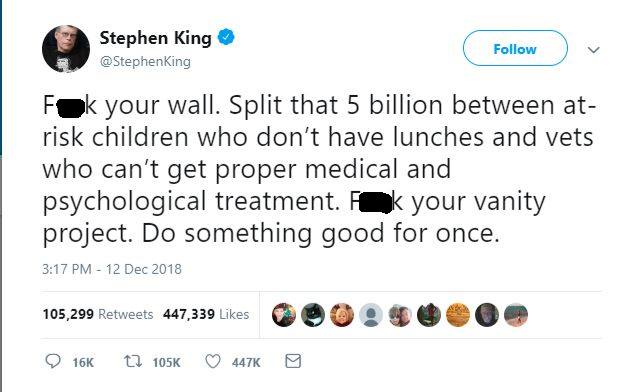 And just last month Stephen King called into question President Trump’s mental state stating that the President’s “tweets over the last 9 days provide a window into an increasingly disordered mind.” He would go on to make a wild comparison stating that American citizens are “all to some extent his hostages.”

Donald Trump’s tweets over the last 9 days provide a window into an increasingly disordered mind. Since we are all to some extent his hostages, I find this dismaying and rather frightening.

King hasn’t been the only celebrity that seems to have the former real estate mogul occupying space in their minds. Ron Perlman recently claimed that Trump should be “in chains” for high crimes and treason. And Avengers director Joss Whedon has made multiple attacks on the President.

Ant-Man and The Wasp actor T.I. also questioned the President’s sanity during an interview on BET’s Raq Rants.

Of course, we also have to include Captain America actor Chris Evans who attempted to demonize the President of the United States by comparing him to the villain of the Back to the Future franchise, Biff. But to be fair, the look is pretty uncanny.

As I said earlier, it is quite funny how much real estate this man is occupying to people who are just as known, and famous as he. Though its unfortunate that King had to use half-truths in his December 12th Tweet against the president, using school children and vets as cannon fodder generally should be frowned upon.

What do you think of these almost weekly Tweets? Do you believe that these celebrities are trying to make a difference? Or are they just tweeting for their own benefit?