At the beginning of December of last year, Kevin Hart announced he would host this year’s Oscar ceremony. But it didn’t take long for a Guardian reporter to comb through old tweets that resulted in controversy.

Hart would eventually step down from hosting duties after he was given an ultimatum by the Academy. However, a number of comedians came to the defense of Hart at the time and now Ellen DeGeneres is as well.

DeGeneres hosted Hart on her talk show and posted the interview to Twitter where she added, “I believe in forgiveness. I believe in second chances. And I believe in Kevin Hart.”

You can see the interview below:

Ellen would add that she is in Kevin Hart’s corner.

In this conversation, @KevinHart4real was authentic and real, and I’m in his corner. #OscarsNeedHart https://t.co/nhMwSefrMl

For defending Kevin Hart and believing in giving him a second chance, DeGeneres was quickly attacked. They claim that she allowed Hart, who is accused of homophobia, off the hook.

Here are some colorful takes on Hart’s interview on the Ellen Show:

The only thing @KevinHart4real proved by going on Ellen was that he is a terrible actor with zero genuine remorse who didn’t have the decency to address his ignorance. No, they weren’t “haters” who came after you. It was the LGBTQI+ community because we’re sick to shit of it.

Also, maybe The Ellen Show could give a platform to one of the thousands of awesome up and coming openly gay comedians instead of giving this douche canoe another blatantly obvious push for the Oscars gig. He’s not sorry. His arrogant interview/Instagram tirade proved that.

Others dissected the entire controversy, arguing that Hart was homophobic for making jokes against gay people. That his words were “harsh” and they were “legitimately startled” by them. Some go so far to call his comedy sets anti gay for daring to crack a joke at their expense.

(1) First, the people who brought up Kevin Hart’s past tweets — like me — were not, as Ellen characterized, “haters.” The host of the Oscars had made anti-gay jokes, and LGBT people who love the Oscars were legitimately startled to see just how harsh his words were. It wasn’t a…

(2) …mob of people out to get Kevin Hart. It was a group of people who wanted to understand Hart’s thinking about those hurtful tweets & his stand-up jokes.

Second, in his Ellen interview, Hart referenced apologizing for his past during the GET HARD junket. Well…

(3) …when @louisvirtel asked Hart about the vaguely homophobic jokes in GET HARD, like Hart affecting an effeminate voice to evoke fear of prison rape, Hart’s response was, “Funny is funny.” That may be a legit perspective; it isn’t an apology. https://t.co/z92Bslbdhr

Others even went so far to question Ellen DeGeneres’ commitment to the gay community for allowing Hart to “absolve” himself. Saying that since her coming out in the mid 90s she’s been running away from her activism. 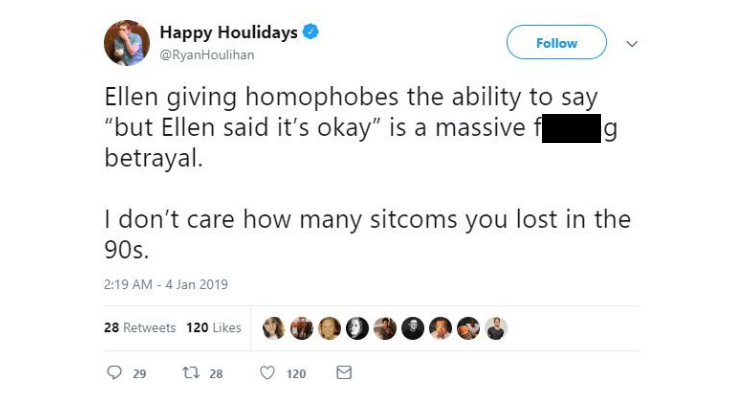 Ellen’s show is basically the embodiment of respectability politics, so using it as a platform to absolve Kevin Hart on our behalf sounds pretty much on brand. Her sitcom allowed her to do something radical, which she suffered for, & she’s been running away from that ever since.

I feel like if you’re not homophobic anymore, you shouldn’t mind apologizing for your past homophobia again and again and again. I don’t want to hear a hostile retelling of how we didn’t hear your meager apology the first time.

this whole ellen/kevin hart thing is a perfect example of how privilege and constant praise distorts a person’s reality so much that they perceive any criticism, however valid, to be an attack on their entire livelihood

Others decided to just hate on Ellen or make it clear they no longer support her.

You’re more out of touch than I though you were. So much for being #relatable

Nah Ellen – now is not the time. If he can show support, CONTINUOUS support, of the LGBT community then maybe sometime far in the future. But he has debts that need to be paid and sounding sad and sending a tweet is not how those are repaid.

And am no longer in yours

You’re so bland and a true sellout.

Ellen wasn’t the only comedain to go to bat for Hart. In the beginning of the controversy friend and co-star on a few projects, Nick Cannon came out to defend Hart against the Twitter mob. He called out the media and others for how they treated Hart compared to the likes of Amy Schumer and Sarah Silverman, calling it a “double standard.”

While Hart’s case is front and center, it shines a light on a deeper problem in society and in comedy. There is a movement in certain sectors to create a “posthumous” version of comedy where the jokes aren’t about getting people to laugh any more, but are to engage people in social commentary.  In fact, Vulture has specifically highlighted this movement where they proclaim that “a special with long stretches without jokes or laughs is held up as the most relevant example of stand-up today,” referring to Hannah Gadsby’s Nanette special.