Since the release of the teaser, the internet has been in an uproar of excitement over the new Ghostbusters film. But a former star of the poorly performing reboot isn’t very happy.

Comedian Leslie Jones took to Twitter recently vent about the upcoming Ghostbusters 3 film. Unlike the 2016 reboot, this will take place in the same universe as the two original movies.

Because of how soon this movie came out the comedian compared the move to something that President Trump would do. Check out the Tweet below: 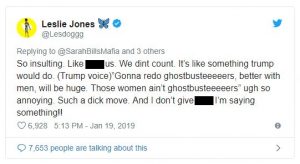 Unfortunately, the 2016 reboot was filled to the brim with problems including poor marketing and trailers which made the film seem unfunny and dependent on odd racial stereotypes and the fact that even Dan Ackroyd had nothing positive to say about the reboot. it was compounded by its poor box office performance which turn had cast and crew scrambling to blame a whole host of odd things.

The cast and crew blamed men, the fandom, and even the 2016 election.

There was no lack of support from the film from critics who praised it. But when you compare scores between critics and viewers, there’s a large disparity for the film. Even on Rotten Tomatoes, the film is certified as “Fresh” though it sits at a 71% critics rating and 51% audience rating as of writing this article.

So, what is going on?

It seems that the actress is looking to lay the blame on Sony and everyone else that wasn’t involved with making the film.

And using President Trump is just something that those in the Entertainment industry enjoy doing when they’re looking to either unload their anger or deflect. In this case, it seems to be both.

But could Leslie Jones have a point? Was it too soon and does the new Ghostbusters film seem out of place since by the time it will be released, it would have been four years since the reboot?

Well if you look at Spiderman, it’s a worse offender. The time between the release of The Amazing Spider-Man 2 (2014) and Spider-Man: Homecoming (2017) is three years. And of course that’s just a single example, but it’s not uncommon for a studio to seize an opportunity to inject some life into a preexisting IP.

The performance of the 2016 reboot guaranteed that there would be no sequel. So, it seems Sony is looking to capitalize on the original Ghostbusters universe to move the franchise forward.

What do you think? Is Leslie Jones correct, does the studio want to just quickly move on from the 2016 reboot? And is it really a cruel move as she implied in her Tweet? Let me know!