Netflix’s The Ranch star Ahston Kutcher recently took to Twitter to reveal to the world his phone number because he missed “having a real connection w/ real people.” 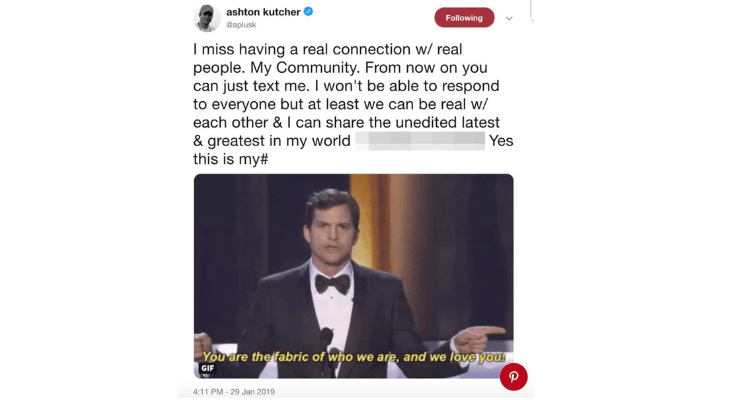 Kutcher would delete the Tweet indicating he would “repost soon” and that “sms is a fragile beast.”

I will repost soon… sms is a fragile beast

Kutcher previously indicated he would be changing his social media strategy.

People reports that fans who texted the number received an automatic reply, “Hey it’s Ashton. This is an auto text to let you know I got your message. Make sure you click the link and [add] my phone so I can respond to you.”

It’s unclear if Kutcher was being serious or if he was returning to his roots as a prankster. Kutcher famously co-created the popular MTV prank show Punk’d in 2003 with Jason Goldberg.

Kutcher hasn’t strayed away from his pranking persona. He and his wife Mila Kunis recently gifted Kristen Bell and husband Dax Shepard a shower curtain with a giant photo of Kutcher and Kunis on it.

What a generous Christmas gift from the Kunis-Kutcher family. A beautiful shower curtain for the attic(t) bathroom!

However, Kutcher seemed to be serious about making some changes in his life as he posted a number of New Year’s resolutions he was mulling as well as advice for his followers.

Starting to noodle on New Years resolutions. Thinking about what are the things I can change about myself that will benefit other people the most. #trollBait

1. Remove financial reliance on advertising.
2. Be authentic (stop worrying about being liked)
3. Listen closely to the answer when asking people “how are you?”

Love harder when it’s hard. Be the observer when we are triggered. Start the day with gratitude. Find the goal in problems, not the frustration. Build! Compassion is the compass.

Do you think Kutcher was being serious about finding a connection with real people? Or do you think he’s setting up a massive prank? Or could it be a marketing stunt for one of his businesses?