YouTuber Nerdrotic spoke to a couple of his sources connected to the show to figure out whether or not it will be renewed for a third season. But he also points to Star Trek: Discovery actor Anson Mounts’ recent Tweets that appear to show the series has been cancelled.

Mount recently Tweeted that he was “experiencing #unemployment” and that he would “#WillActForFood.” Not only does he mention he’s experiencing unemployment, but he’s with fellow Star Trek: Discovery actor Ethan Peck who plays Spock.

Mount would follow up that Tweet with a now-deleted one responding to a fan who questioned whether Star Trek: Discovery would see a Season 3.

So does this mean no Season 3 then?? @StarTrekRoom @startrekcbs ??? the trolls have started their new narrative that this is a hint that DSC has been cancelled and that this is the reason you are unemployed. #StarTrekDiscovery #StarTrek 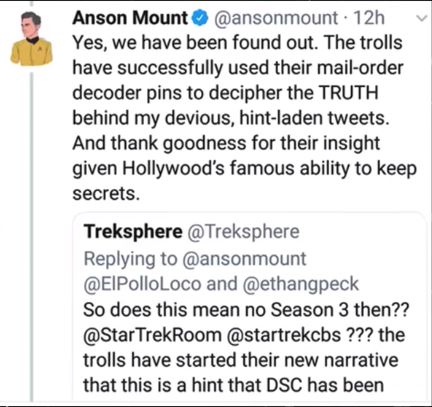 Our @SonequaMG is a great leader who enjoyed a special relationship with EVERYONE in the cast & crew, but my dog Mac got special treatment. This was taken during a break from shooting episode 2.2 “New Eden”. @startrekcbs @StarTrekNetflix @StarTrek pic.twitter.com/GacvnJVSAq

If you notice, Mount uses “enjoyed” in the past tense indicating the relationship between the cast and crew might be over.

Nerdrotic also indicates he has spoken to two insiders. One of the insiders told him that the show is undergoing reshoots, but CBS is not paying for it. His insider explains that J.J. Abrams’ Bad Robot is paying for the reshoots. And the reason CBS isn’t paying is because the second season is allegedly costing updwards of $150 million. The insider would definitely declare that Star Trek: Discovery is “dead.”

However, Nerdrotic’s second source indicates that a decision has not been made regarding whether or not CBS will renew Star Trek: Discovery for a third season.

Adding to the speculation that CBS might cancel Star Trek: Discovery is the fact that CBS released the entire first episode of Season 2 onto YouTube instead of on their own CBS All Access streaming service where the show aired for Season 1.

Nerdrotic believes the episode was placed on YouTube so CBS could determine the reaction from their audience and whether consumers are actually enjoying the show. He specifically notes they will look at the comments from viewers, but they will also have in-depth breakdown of analytics from YouTube.

Star Trek: Discovery has been heavily criticized from multiple angles. Many like Dave Cullen have called the show out for it’s social justice agenda that focuses on current day politics involving race and diversity.

Other critics like Red Letter Media questioned who the show was made for, and pointed out it drastically departs from Star Trek creator Gene Roddenberry’s lore.

The show has an average audience score of 51% on Rotten Tomatoes.

Do you think Star Trek: Discovery will get renewed for Season 3 or do you think there is some validity to this rumor and the show will get canned?