Wherein we make the observation that if you’re a normie who, you know, DOESN’T READ COMICS, you are going to love this mini-series. If you’re a comics fan you’ll probably just look at it and go, “Meh” and if you’re a fan of Jack Kirby’s Fourth World you are going to be offended, and not in a good way. 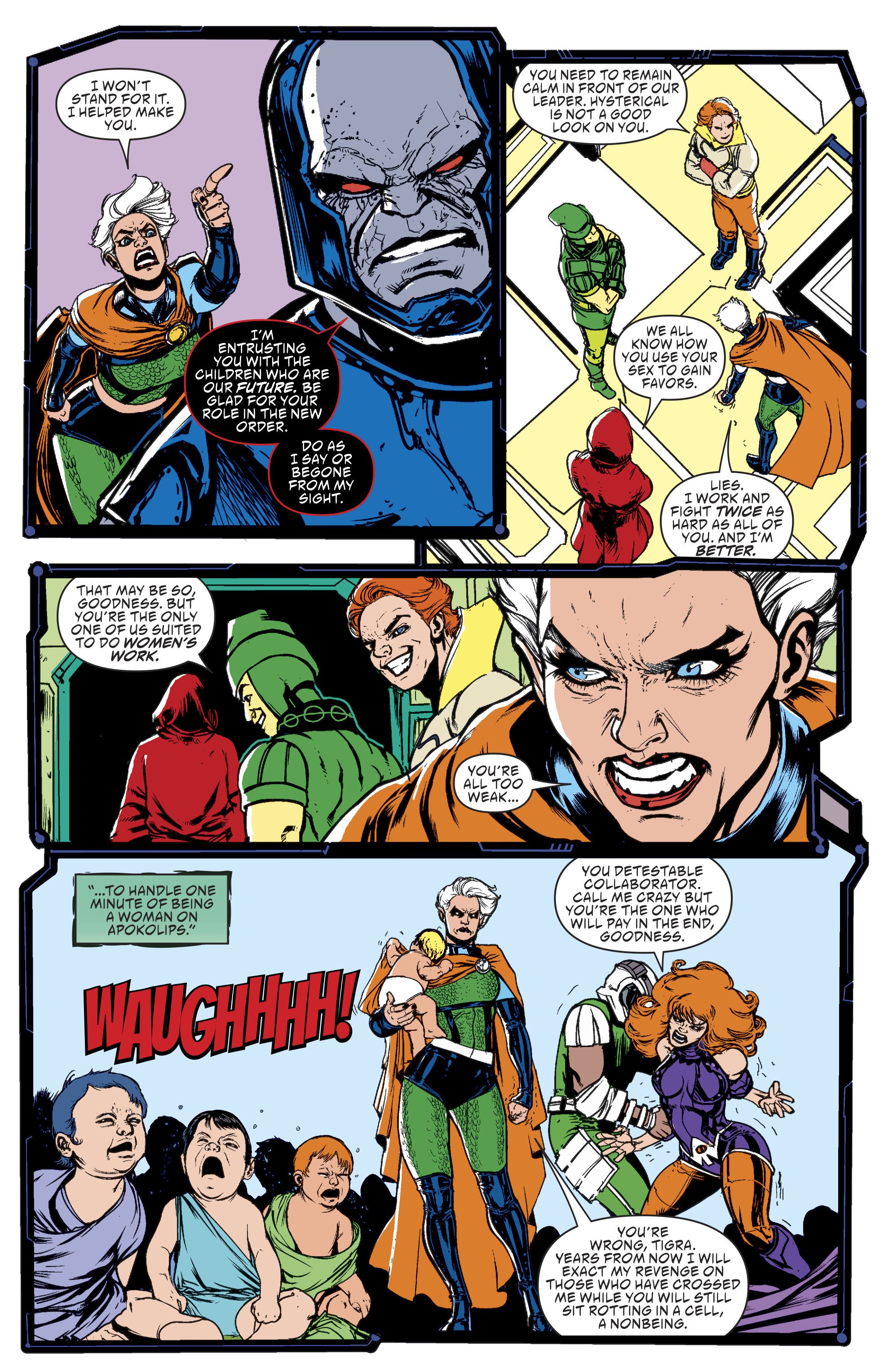 Female Furies #1 is a case of DC bringing in a writer with a clever idea and letting her run rampant with no editorial oversight. It’s obvious from the first page that Cecil Castellucci is merely passingly familiar with the general characters that inhabit The Fourth World stories, and that’s where her knowledge base stops. In nearly 50 years of stories told in this world, nobody has missed the characterization mark by such a wide margin, even John Byrne had enough respect for Kirby’s work to keep every personality consistent.

Every male character in this story acts like a stupid frat boy, and every female character just wants a chance to go out and fight for the cause. It’s ridiculously bad storytelling that a few minutes of wiki research would have solved. Castellucci splits the story perspective between Granny Goodness and a not exactly new character Aurelie. Granny just wants her fighting girls to be able to go out and play with the men, and the best and brightest of them all is Aurelie, originally a throwaway character from Barda’s origin story in Mr. Miracle V1 #9, not, you know, Barda. In the course of the first issue, Granny Goodness gets pretty much raped by Darkseid who forces himself on her with an awesome bit of seductive dialogue that even L Ron Hubbard would wince at. “Battle makes me hungry for what food cannot fill. Come here Goodness.” The frat boys then proceed to accuse her of using sex to curry favors from the boss while he ignominiously gives her responsibility over the orphanage because, you know, she’s a woman and obviously good with kids, amiright?

For some inexplicable reason, the ruling frat boys of Apokolips are made up of Desaad, Steppenwolf, Glorious Godfrey, and yet another throwaway character from Barda’s origin story called Willik. (If anybody is wondering what one issue out of 50ish years of story Castellucci read to prep for her Female Furies mini-series, I’m taking bets.) Apparently Castellucci couldn’t be bothered to use any of Darkseid’s really pesky elite lieutenants that might get in the way of the story like say; Amazing Grace, Lady Justeen or Mortalla. It takes Granny Goodness so many years to train up her female furies that she ages from a beautiful battle warrior into the classic Granny Goodness that we all know and hate. Oddly nobody else ages out this way.

Granny is finally given a chance to show what the ladies can do, but the frat boys aren’t having it and they subject the Furies to a Bake-Off, an Evening Gown competition, and a swimsuit competition they bizarrely call a smile contest, all of which they of course fail. So, let’s gloss over the fact that the weakest of the Female Furies is fully capable of kicking the collected frat boy asses of everyone except Darkseid. Let’s skip the fact that Granny Goodness is and has always been the most vile, evil, despicable, sadistic torturer in Darkseid’s employ. Let’s not even acknowledge the fact that Darkseid has never been shy about throwing females into the meat-grinder of his eternal war with New Genesis. Finally, we’ll blithely skip over the fact that Apokolips has always been an evil meritocracy where the most evil, conniving backhanded snakes rise to the top and everyone else is food for the Hunger dogs. This is lazy, awful writing. 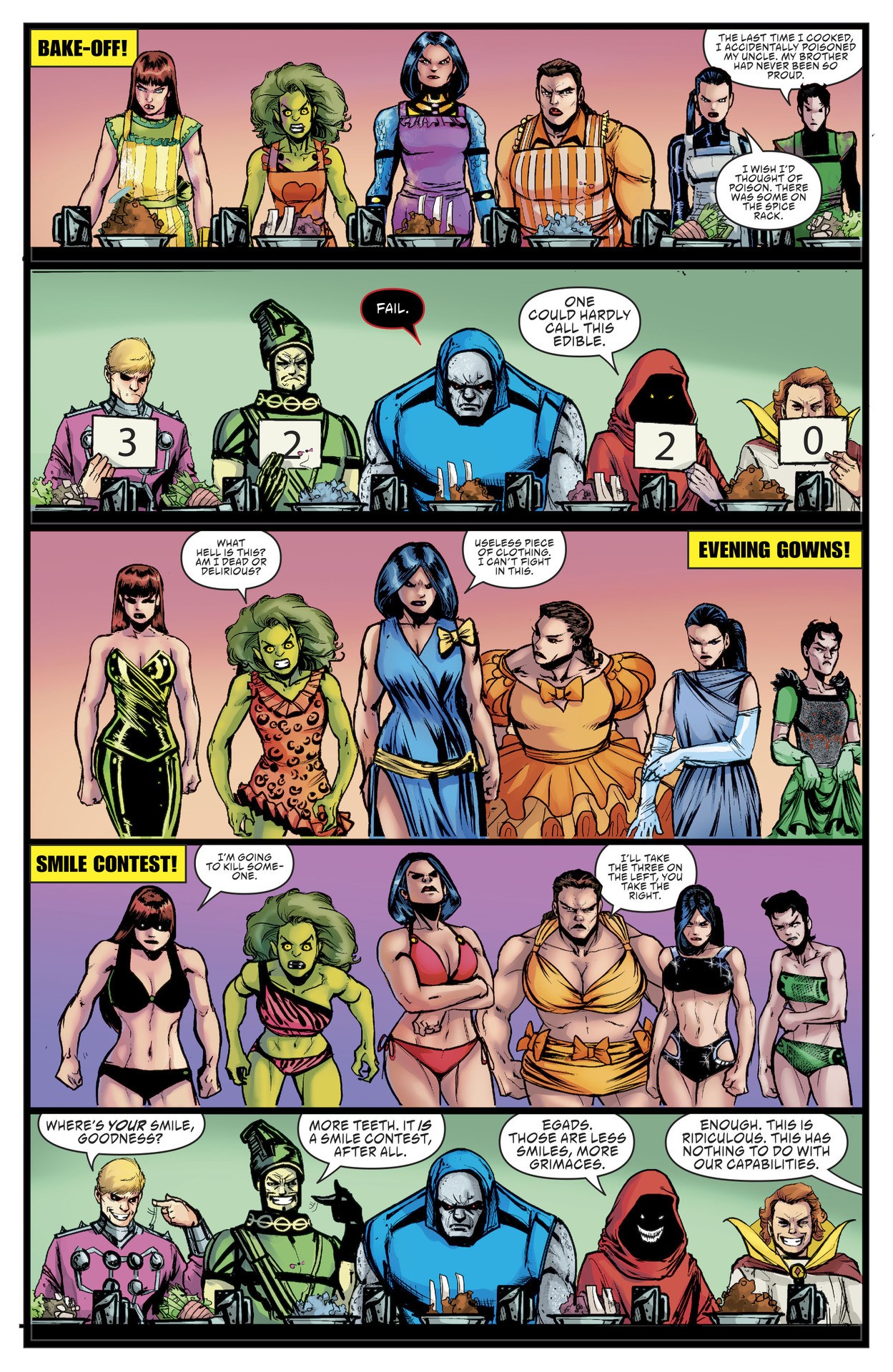 Don’t Hold Back Dan, Tell Us How Lazy

Here’s how utterly sloppy this story really is. There is an easy #metoo story here. It begins with Big Barda’s escape to Earth and it ends sometime after the Female Furies find her. You can tell it mostly in flashback, you can show how Barda escapes and give her more depth than just following her man. You can show the Female Furies escape to come after her and have them come to at least an understanding with Barda and Scott, if not each other, and you can keep everybody in character and do your #metoo story. It’s literally that easy.

At Least The Art Isn’t That Bad

Adriana Melo’s art for this issue is serviceable. She has some problems with forced perspective, and positioning her characters within the panels, but for the most part she serves the story adequately. The one thing I really found distracting is Aurelie’s outfit. Melo does an excellent job of keeping to the original Kirby designs, except for this one character. She looks like an extra from Shang-Chi Master of Kung Fu and it makes her look ridiculous. Melo is another artist who would be far better served not inking her own pencils. With the help of a seasoned, professional inker I think a lot of her perspective issues would have been far less noticeable. 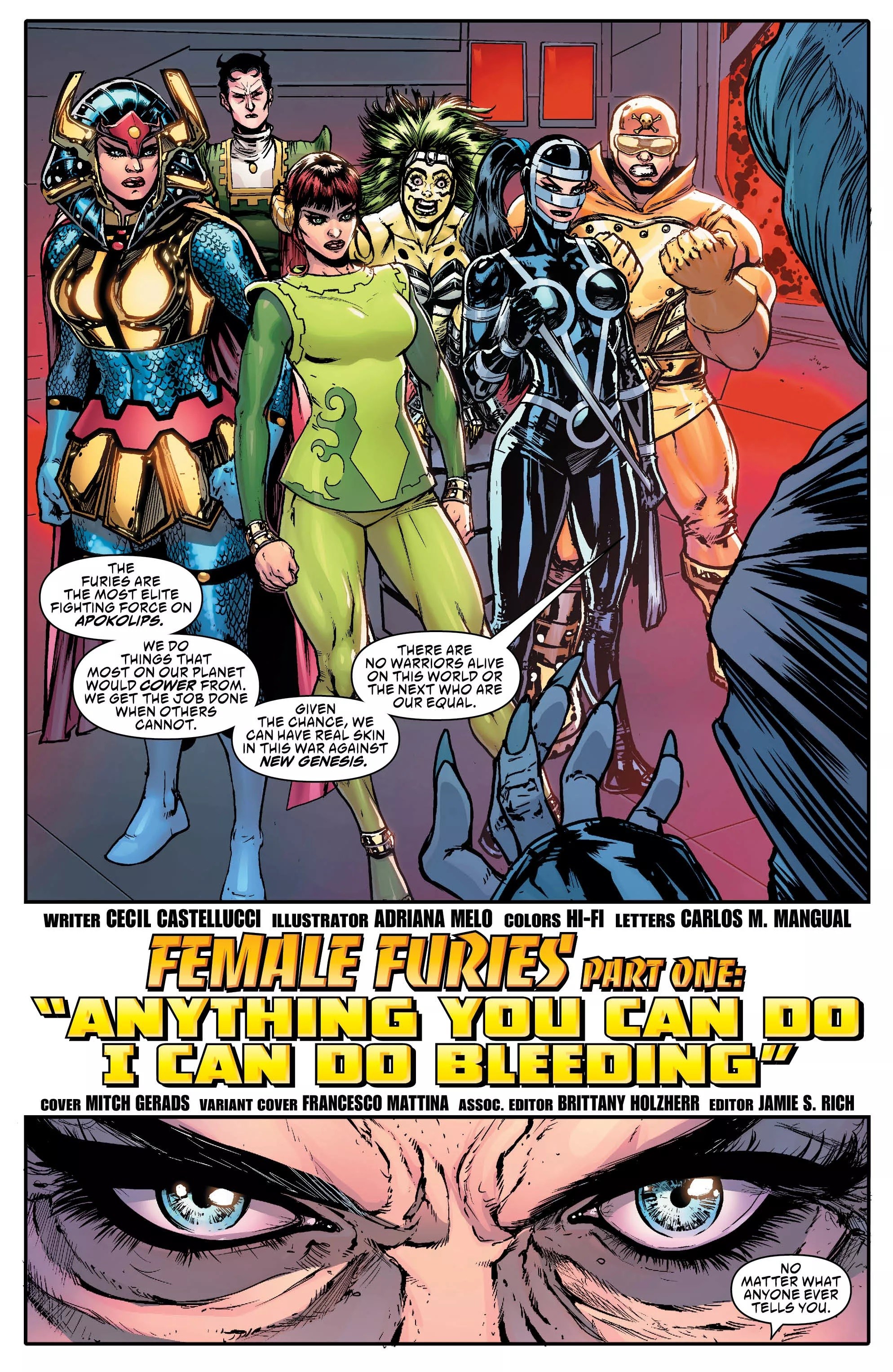 The Wrap-Up, With Hot Dogs

I actually had my wife read this issue. She’s not much of a comic book reader beyond the occasional Ted Naifeh, Roman Dirge, or Serena Valentino issues I throw at her. As far as the DC universe goes, she qualifies as a normie. She read this issue and found it a nice little critique of pageants, and an odd critique of glass ceiling politics. So, there’s your audience for this, women who don’t buy comics, really don’t read comics, and are dis-interested enough in comics not to ever recommend them.

But it did spark a conversation when she wondered why I was so upset about Female Furies #1, and I’ll use the same illustration I used with her. The fans of any given work of serial fiction have a reasonable expectation of how the characters should act and react. James Bond is always going to quip, and his villains are always going to monologue. Superman is always going to be the big blue boy scout. He’s always going to stand for truth, justice and the American way. He is not and never will be a deadbeat dad, and that’s why Man of Steel failed. She’s seen the movie, she got it.

To paraphrase a metaphor from mah boi Zack; When you write comics that are well established, long running narratives, you are not an artist. You are a hot dog vendor. There are many accouterments and condiments that you can use to make the hot dog, but your end result had better be a hot dog. These are not your characters. You are caretakers for the company’s IP.  If you want to serve up a plate of spaghetti get out of the hot dog store. That’s what Image and the massive host of independent comics companies are for. Go write characters without roughly 50 years of backstory and characterization and you won’t have to worry about writing a story that takes some research. It’s not that difficult a concept to grasp.