Black Lightning creator Trevor Von Eeden detailed he received a visit from the Secret Service after he dreamed of a double assassination of President Donald Trump and Vice President Mike Pence.

Not only did Von Eeden create Black Lightning alongside Tony Isabella, but he also co-created Count Vertigo with Gerry Conway. He would go on to create [easyazon_link identifier=”B07K2JDBQ5″ locale=”US” tag=”boundingintocomics-20″]Thriller[/easyazon_link] at DC Comics alongside writer Robert Loren Fleming. He would also write and draw a 242-page graphic novel about the life of boxer Jack Johnson, which IDW published as [easyazon_link identifier=”1600106382″ locale=”US” tag=”boundingintocomics-20″]The Original Johnson[/easyazon_link].

Y’KNOW WHAT WOULD ALSO BE TOTALLY UNPRECEDENTED IN HUMAN HISTORY, BESIDES AMERICA’S FEMALE PRESIDENT, OR HER FIRST OPENLY WHITE SUPREMACIST IDIOT PRESIDENT? — THE VERY FIRST PRESIDENTIAL DOUBLE ASSASSINATION, EVER!

LIKE, LET’S SAY…IF SOMEONE TOOK OUT BOTH THE PRESIDENT, AND THE V.P. OF AN OPENLY CORRUPT DICTATORSHIP…OR DICTATORSHIP-TYPE COUNTRY…WOULDN’T THAT JUST GUARANTEE WHOMEVER DID THAT EVERLASTING FAME–AND THE UNDYING GRATITUDE OF AN ENTIRE NATION OF PEOPLE? (SOME OF WHOM ARE PROBABLY VERY, VERY WEALTHY, TOO!…🤔)

This occurred to me as I was contemplating what would TRULY be GREAT in America, nowadays…I hope U guys don’t mind my musing out loud in public here…it helps me think, y’know?…Perchance to dream… 🐷🐣💥= 💰!!! 😀

On February 21st, Von Eeden would detail a visit from the Secret Service due to this post. He would confirm that they visited his house due to the above post. (Archive link: http://archive.is/Q1G5x)

“SO THE SECRET SERVICE JUST CAME TO MY HOME, BECAUSE OF THIS POST…TAKE A READ, AND I’LL TELL YOU WHAT HAPPENED NEXT…(NO, SERIOUSLY–THEY JUST LEFT!)”

He would go into further detail in another post (Archive link: http://archive.is/sHZh8) describing the visit from the Secret Service as boring. However, he would indicate that he wishes Donald Trump was dead. He would also include a photo of the United States Secret Service business card.

“SO THE SECRET SERVICE CAME TO MY HOME TODAY (WOKE ME UP, TOO–SO I WASN’T IN THE BEST OF MOODS…)

I went to bed around 6am. At 11am, someone rings my front doorbell. A large, pleasant-looking young black man, and a tall, young blonde woman tell me they’re from the Secret Service, and ask to come in. I say “No. What’s this about?” The man shows me the post “Did you write this?” “Yes. What about it?” “We’re here to investigate this, and find out who you are.” I point to the BLaction figure, and BL plaque I’d gotten at the Akron Con with Tony & Jack in ’17 that’re prominently visible in my front window “You guys are Secret Service– and you don’t even know whom you’re investigating?”… I gave ’em my credentials–first black DC artist, co-creator of first black superhero on TV–and said “Do you really think I’m involved in a plot to assassinate our RACIST PRESIDENT? Well, I’ll tell you to your face right now: I WISH HE WAS DEAD!!! This IS still a free country, ain’t it?”… Long story short–I didn’t let ’em in my apartment without a warrant, I didn’t give ’em squat as to “whom they can speak to about me”…and I eventually escorted them to my front gate, and out of my yard. As they left, the black guy said “Have a GREAT day!” and the blonde woman said “Have a good day.” I told ’em both “I ALWAYS HAVE A GREAT DAY! GOODBYE.” I’ll letcha know if anything else happens…right now, I’m a bit upset about not getting a full night’s sleep because of an idiot Pig “President” that I–like most people in America–wish was dead, already…but I’ll settle for impeachment, and removal from office–ASAP! Even his Secret Service is goddamned boring…😴” 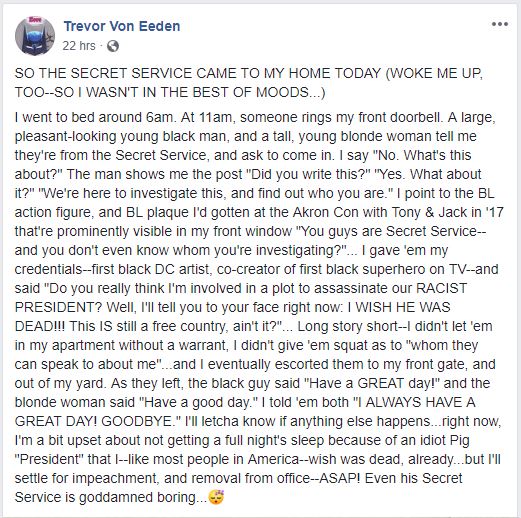 In his most recent post (Archive link: http://archive.is/Oi9sl) on the subject he would have a bunch of colorful names for President Trump.

“THE THING ABOUT BULLIES (I.E: AUTHORITARIAN POWERPLAY ADDICTS) IS THAT THEY THINK YOU’RE JUST LIKE THEM AT HEART–SCARED, HYPOCRITICAL, AND COWARDLY. EVERYONE GOES BY WHAT THEY KNOW, Y’KNOW…

LOOK NO FURTHER FOR THE PRIMEST EXAMPLE IN THE LAND THAN OUR FEARFUL, FAT-HEADED, FULLAS***, BULLS*** “LEADER”, SQUATTING LIKE A KING TOAD IN THE OFFAL OFFICE OF THE WHITE SUPREMACIST S***HOUSE IN WHATSHITTOWN, DAMNED CREEPS…IN THE UNITED 💲***HEADS OF 💩MERICA, 2019.

I think that should just about cover everything. So what else is new in the world lately?… 🙂”