Review aggregator Rotten Tomatoes appears to have deleted over 50,000 reviews for Captain Marvel.

A screenshot taken this morning around 9:30 AM ET shows the film had over 58,000 user reviews with an Audience Score of 32%

A screenshot of the website taken at around 1:50 PM ET shows there are only just over 4,000 user reviews. The deletion of these 50,000 user reviews appears to have boosted Captain Marvel’s user score by a 4 points to 36%.

Just a few hours after opening user reviews on @RottenTomatoes, #CaptainMavel has over 58k reviews. Infinity War, a movie released a YEAR AGO only has 53K total.

Hey @RottenTomatoes are you ever going to stop people from using bots to spam your site or do you just not care? pic.twitter.com/RmGMgZ9C23

His thoughts would be echoed by Forbes writer Scott Mendelsohn.

Fun fact: #CaptainMarvel already has 58,000 user reviews on @RottenTomatoes with a “shockingly low” score of 31% (average user rating – 2/5). For reference, HOW TO TRAIN YOUR DRAGON 3 (which has been out for nearly a month just in North America) has just 51k user reviews. pic.twitter.com/JlL3Hj8bxi

There is something to this idea as a number of the reviews simply stated “I_am_Robbie_the_synthetic_comment.” However, the scores attached to reviews with that comment varied widely from five stars simply just a half star. 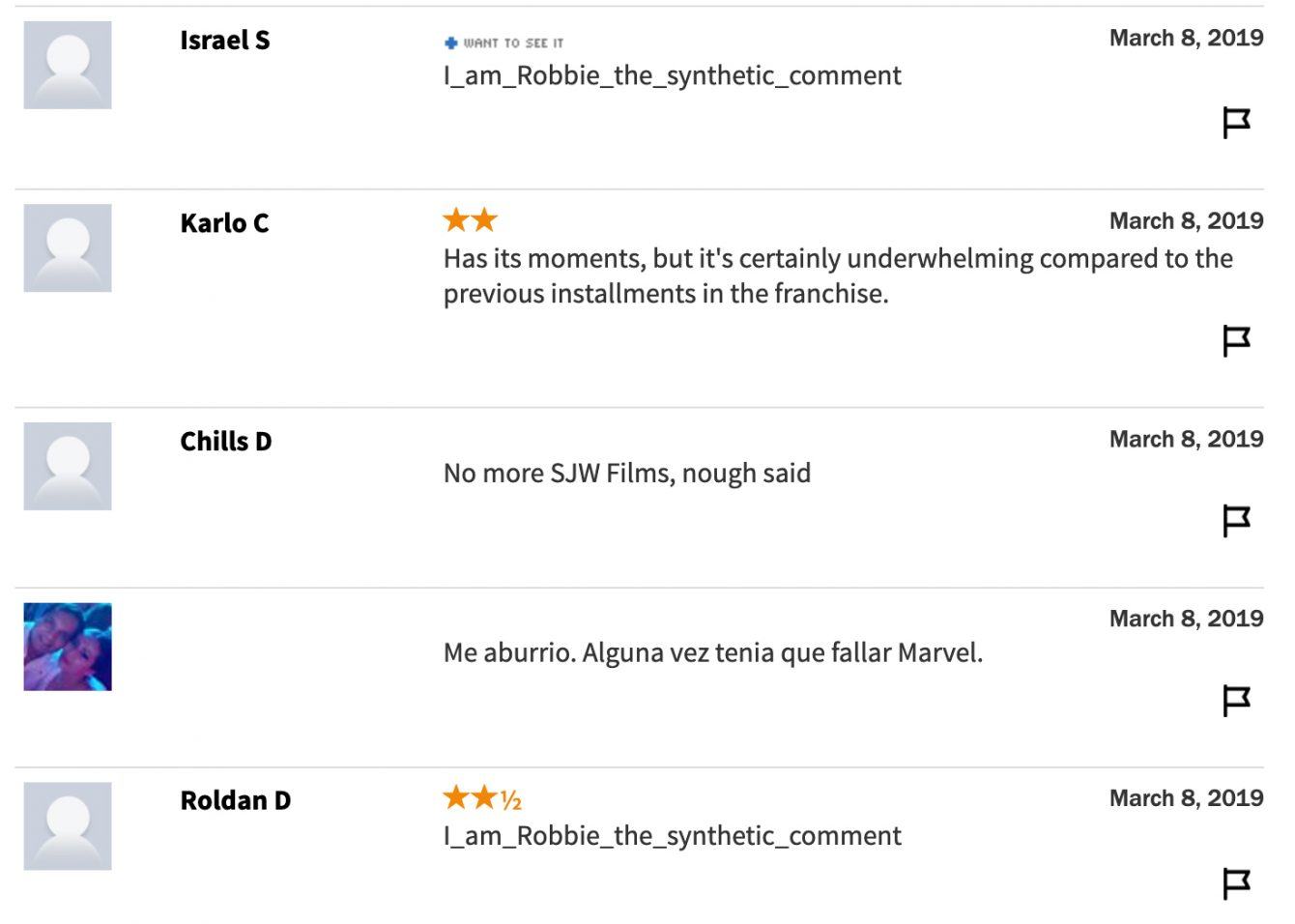 Rotten Tomatoes recently radically altered their website after a number of false and misleading reports from a number of entertainment websites that claimed people were “review bombing” Captain Marvel when in fact they were only marking whether or not they were interested in seeing the film. They were not actually reviewing the movie, and could not review the movie at the time because the film was not in theaters.

Rotten Tomatoes explained the decision in a blog post:

They also announced they were disabling commenting on movies before they release to theaters.

Following their announcement, the website was accused of shilling for the movie studios.

@RottenTomatoes is rotten indeed. Too the core. #censorship #shill #scammers

However, there were also calls for Rotten Tomatoes to take down Audience Scores altogether. SyFy Wire’s Editor-in-Chief Adam Swiderski stated:

I think they should get rid of fans review entirely. It’s not a right. They run a website. They run a business. Critic reviews are critic reviews and that’s fine. And listen this isn’t me saying fans can’t have an opinion. But this is a tool. It’s obviously being abused more than it is being used constructively especially around particular films that politically rub some people the wrong way for certain reasons. It’s why we can’t have a nice thing. It would be nice if people used it the way it’s supposed to be used, but no one is. So screw it, goodbye.

“The mere fact that you give a voice or a platform to people who normally don’t have a platform is part of the problem. You can have an opinion that you don’t really have to be responsible for because nobody’s going to see you, nobody’s going to challenge you on it and if you want to bring somebody down or just ruin somebody’s day, you can say anything. Everybody doesn’t want to be uplifting and that’s pretty much what that problem is.”