Following a number of news stories that blatantly lied to their audience about individuals “review bombing” Disney’s upcoming Captain Marvel film, Rotten Tomatoes rolled out a new redesign for their website which removed the audience interest score for films that had not been released to theaters yet.

They then show a screenshot from Jaws of what you will now see on each movie’s page. 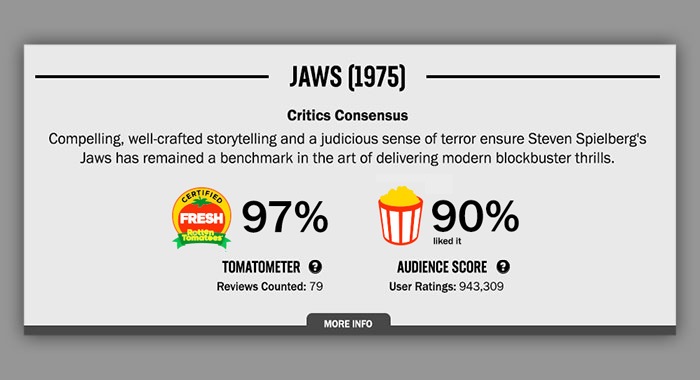 They then announced they will also remove their comment function on movies before release.

While Rotten Tomatoes implies these redesigns have been in the works over the past 18 months, the website faced intense pressure from a number of outlets including The Hollywood Reporter, ComicBook.com, ComicBookMovie.com, The Verge, Inverse, SyFy Wire, Cracked, The Mary Sue, ScreenRant, Comic Book Resourse, The Mirror, and more who claimed Disney’s Captain Marvel film was being review bombed by “trolls” with many of the websites describing these trolls as “sexist.” As Rotten Tomatoes notes in their press release these websites were confusing the ‘Want to See’ percentage score with the ‘Audience Score’ percentage number. And it’s more likely they were doing so deliberately as many of them referred to the Want to See score as a review even when screenshots they provided in their articles showed users only indicating whether or not they were interested in seeing the film.

As Rotten Tomatoes, Netflix and other platforms remove downvotes (and comments) they ARE silencing ‘trolls’. But they’re also silencing customers.

Market research costs MILLIONS, and the internet generates it for free. Deleting everything to purge a few opinions seems excessive. pic.twitter.com/sxxkGY7Mcx

It’s stupid & it’s cutting off their own nose to spite their face. Sorry they don’t like the answers but they are now reaching the point where they’ve forgotten 1 simple truth:

“Reality does not always afford you a truth to your liking”

So they’re trying to deny it & silence it

Not to draw too fine a point but:

THE SITE LITERALLY TAKES ITS NAME FROM THE VAUDEVILLE AUDIENCE PRACTICE OF THROWING ROTTEN TOMATOES AT BAD PERFORMANCES!

It’s moniker is born from the idea of “down voting” in what could be considered a very trollish manner. pic.twitter.com/RhdkC6R9gq

Tomatoes became an aggregate for agendas, not movies. Next they’ll hide or take away the Audience Score which is more often skewed against the “pros” especially if a film is being held up for some social stance, not on its quality.

ROTTEN TOMATOES protects CAPTAIN MARVEL for DISNEY and then LIES ABOUT IT!https://t.co/xI9MXAHLVQ

When you actually break it down it’s so stupid. The politics don’t matter. Lots of people are no longer interested in seeing a movie for whatever reason, RT thinks it’s wrong to not want to see this movie so they take away that option.

What do you make of Rotten Tomatoes new policy? Do you agree with their decision to remove the audience interest score and remove comments from films that have not yet been released?