Lawyer and popular legal YouTuber Nick Rekieta was subject to back-to-back Twitter suspensions last week which Rekieta alleges were due to him being targeted by supporters of the #KickVic movement surrounding voice actor Vic Mignogna.

On March 11th, Rekieta replied to a discussion on Twitter with a simple statement indicating that he would be ‘doxxing’ a large group of people: 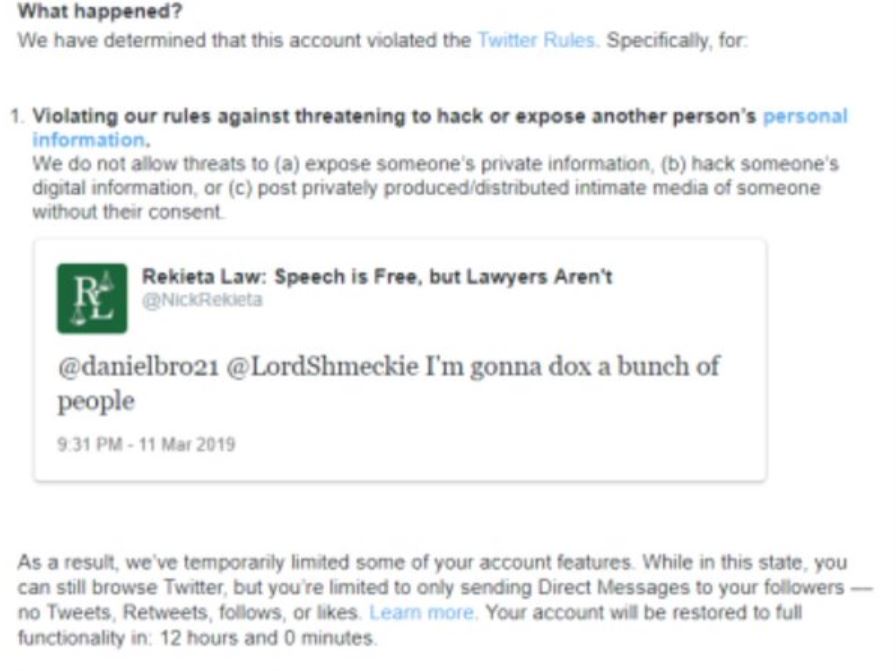 According to a user who was interacting with Rekieta in the thread, Daniel, Rekieta’s tweet was made in jest in response to someone who thought that Rekieta’s display of a public law firm office on a stream was ‘doxxing’:

He made a joke on another thread about how he’s gonna dox someone. After a lady thought thought him showing a public law office firm on stream was actual doxxing. Twitter then suspended him for it. Now he’s back

Shortly after Rekieta’s account was restored, it was once again banned by Twitter, this time due to a Tweet which jokingly referenced Disney and their overzealous legal teams. On March 12, Rekieta made a guest appearance on a livestream hosted by ThatUmbrellaGuy, where he discussed his Twitter bans and the current state of the situation surrounding Mignogna:

During his appearance, Rekieta revealed the nature of the aforementioned Disney tweet which resulted in his second ban:

“The tweet was from 2017, December of 2017, in which I very obviously, as a joke, said “Disney will send team super lawyer to kill you”. That was [considered by Twitter to be] abuse.”

Rekieta believes the bans were the result of a mass reporting campaign against Rekieta due to his support of Mignogna (Rekieta created a GoFundMe page for fans to donate to Mignogna’s legal efforts which currently sits at over $100,000) and that the campaign was being used as damage control by Mignogna’s opponents due to what Rekieta believes is a loss of control over the narrative:

“They have lost the social media narrative which was their only weapon. Their only weapon for the past couple years has been controlling the Twitter narrative and organizing enough bored people to go after and bother someone to brigade against a career. Well, they’ve lost it. Funimation is apologizing for their obvious chicanery that gets called out. You’ve got these people getting zero likes like Jamie Marchi and Ron Toye and Monica Rial, before they got their ‘shut your mouth you idiot’ letters, back before that happened, they were getting three to six likes on their posts coming after Vic Mignogna. They’ve lost the social media narrative, they don’t know what to do anymore, so now it’s lash out time.”

Ultimately, Twitter lifted the ban against his account, with Rekieta taking advantage of his account’s restored functionality to announce his return:

Well well well. It seems that @jack and @TwitterSupport are humorless piles of refuse who SAY that context matters…

Good to be back.

What do you think about Twitter suspending Nick Rekieta?