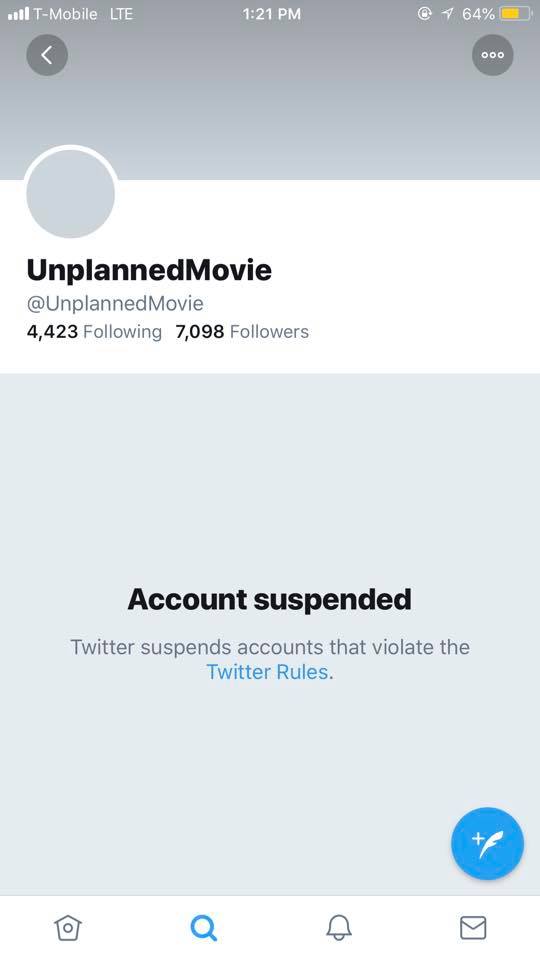 However, after a number of users notified Twitter and its CEO Jack Dorsey the account’s status was restored.

Thank you everyone for your support in letting @Jack & @Twitter know when our Unplanned Movie account was recently suspended without cause.
We are back and excited for the great response we’re getting in theaters this weekend.#grateful https://t.co/vTmhqoXIWm

The Hollywood Reporter reports that Twitter explained the account was suspended because it “was linked to another account that had violated Twitter’s rules.” They added, “When one account violates those rules, the system then cracks down on linked accounts to mitigate the risk that the original, banned account would simply move accounts. After reviewing this case a second time, Twitter decided the Unplanned account should not be affected by the other’s suspension and restored it.”

Still waiting for an explanation as to why @Twitter inexplicably suspended our account. I think we all know why. Perhaps it’s because we are moving the needle, making a difference and changing hearts and minds with #UnPlannedMovie@LiveAction https://t.co/RvobjpflcF

The co-writer and co-director of Unplanned Cary Solomon issued a statement to The Hollywood Reporter about Twitter’s suspension of the movie’s account.

Chuck Konzelman, who is also a co-director and co-writer on the film added:

“It’s a sad state of affairs when the right to free speech gets shut down with the flick of a switch. The Twitter account for our film, Unplanned, was suspended this morning — without explanation. Whether this was an executive decision by Twitter, or a reaction by Twitter to complaints from those opposed to the pro-life viewpoint, either reason is unacceptable. Fortunately, the uproar in our defense was loud and fast in coming: Our account has since been reinstated. Thanks to all who have rallied to our defense.”

Twitter has come under fire of late due to its censorship practices. Dorsey admitted the company made mistakes when they began suspending individuals for tweeting out “learn to code.” They had previously declared the phrase “abusive behavior.”

Not only has Twitter faced significant criticism for its treatment of users tweeting “learn to code,” but the company is also being sued for banning Canadian gender-politics blogger Meghan Murphy. Murphy was banned for criticizing transgender politics.

This isn’t the first time Unplanned has had to deal with censorship. The Hollywood Reporter indicates that Lifetime, Hallmark Channel, HGTV, USA Network, Food network, The Travel Channel, and more rejected television commercials for the film.

Unplanned producer John Sullivan noted, “We were looking to spend money, but they didn’t want to get involved.”

Unplanned has already earned close to $3 million after opening in just over 1,000 theaters this weekend.

What do you make of Twitter suspending Unplanned? Do you believe their explanation? Do you think there is a reason why they haven’t explained their behavior to Unplanned?