Following the terrorist attacks in New Zealand, a petition created by Maria Ruiz has called for YouTube to remove popular personality PewDiePie from the platform for normalizing “white supremacy.”

The petition created by Maria Ruiz is titled, “Remove White Supremacist Content from YouTube.” The petition is currently just shy of 50,000 signatures with 49,197 people having signed on. Ruiz specifically targets PewDiePie due to the terrorist attacks in Christchuch, New Zealand. The shooter name dropped PewDiePie in his video of the attack.

Immediately after the shooting PewDiePie responded to his name being used saying he was “absolutely disgusted.” 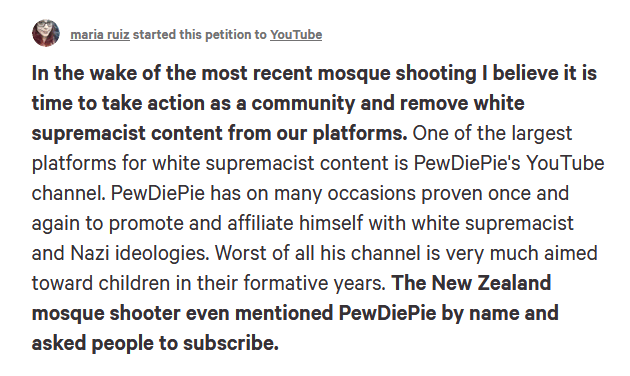 She then adds that PewDiePie’s content is “a clear and present danger to society.” But she’s not just going after PewDiePie, she also targets YouTube:

“At what point is YouTube legally responsible for the content it provides and allows on its platform? I believe that his actions constitute a clear and present danger to society. YouTube’s guidelines state, “if content is intended to be humorous or satirical, it may remain online, “even if offensive or in poor taste.” However, “if the uploader’s intent is to incite violence or hatred, it will be removed.” How long will YouTube remain negligent?

Finally she concludes her petition writing:

“It’s Time to remove PewDiePie from YouTube permanently and develop AI to find and remove extremist material instead of having the SPLC do their work for them.”

A number of articles in the media have attempted to paint PewDiePie as being responsible for the actions of an Australian man. The Washington Poster writer Bethany Lacina even tried to connect PewDiePie to Captain Marvel criticism and that criticism to the New Zealand terror attacks.

“The alt-right’s pop culture tantrums bring people into the radicalization pipeline, like the NZ murderer who loves Pewdiepie. But the youth-facing part of the alt-right is invisible to most conservatives.”

Lacina wouldn’t be alone. Independent journalist Nick Monroe reported the Daily Dot “incited the death threats against PewDiePie and the people he followed.”

Daily Dot INCITED the death threats against @pewdiepie and the people he followed, attempts to wash their hands of responsibility with HALF-ASSED “CORRECTION” https://t.co/pw30Zor0iO pic.twitter.com/cYf9yitKaf

PewDiePie wasn’t alone in being blamed for Christchurch. One Angry Gamer reports writer Meg Jayanth blamed #GamerGate and gamers at large for the shooting.

PewDiePie is currently in a hot competition with Indian company T-Series to be the most subscribed channel on YouTube. T-Series just overtook PewDiePie on March 30th.

However, not to be outdone PewDiePie released a congratulations parody video for T-Series!