Kotaku UK has been accused of racism after publishing an article accusing Nintendo, Super Smash Bros., and Persona 5 of insulting disabled people.

Dale noted in her article that she believes she heard the word “retarded” on the record ‘Wake Up, Get Up, Get Out There.’ The song is part of the Persona 5 sound track and was included on Super Smash Bros. Ultimate DLC which allows Joker, the main protagonist in Persona 5, to be a playable character.

The song is actually the main theme for Persona 5, which released back on September 15, 2016.

Dale would then write, “this does not exactly fit Nintendo’s family friendly image, nor seem an especially appropriate inclusion in a game with a 12 rating (or indeed in any game).”

Many took offense to the article.

This entire thing could’ve been avoided if they had done basic research, but this is Kotaku of course. Controversy = clicks, no matter how fabricated it is.
Also, why didn’t they do this back when Persona 5 first came out? It’s the same damn song.

A number of people pointed out that Kotaku UK might actually be engaging in racism since the song was composed by Lyn Inaizumi, a native Japanese speaker.

As anyone who listens to music sung by Japanese, Korean, or any other Asian artists know, it can be common for certain sounds to be pronounced incorrectly when they sing lyrics in English. In this case, what Dale thought was “retarded” was in fact “retort it.”

She wrote an article for Kotaku about a Persona 5 song lyric now in Smash U. which she misheard as “Retarded”, when the Japanese singer says “Retort it” in english, not her native language, and there was a quite a backlash to it.

@jasonschreier @Kotaku What’s up with this article? This seems pretty freaking racist…https://t.co/aN7HiV63MA

This is pretty racist if you guys….making fun of someone or accusing someone for not being able to speak completely affluent in a different language is messed up

Yikes man, Kotaku articles pop up pretty often in my suggested news so I’ll often click them and I’ve never really had an issue before. But them doubling down on that racist Persona 5 “article”?

…Yeah I won’t be doing that anymore.

man I always just saw Kotaku is badly written articles but this is just gross. it’s inherently racist, ignorant, and they literally only reply to comments to like point out a typo or something because they can’t take any fucking criticism. this website needs to die

After being accused of racism, Dale would indicate that she had been prevented from commenting on the article on Twitter. She also noted that her article had been altered without her permission by her editor. She indicates this editing removed her doubt about the claims that the song included the word “retarded.”

Niche Gamer contributor Sophia Narwitz posted screencaps of Dale from a Facebook group where she stated, she was “banned from publicly reaponding.”

Dale also explains that her “boss took out all the ‘seems to be statements’ and set it live prior to me hearing back from my comment requests.” Dale notes she “wanted to wait.”

She goes on to note that her boss sent her an email saying that she was making her look bad and was ordered to “delete my tweets and not defend myself any further.” She concludes, “The boss ignored my warning, made it definitive, won’t let me walk it back or say anything, and in just stuck taking the blame for things I’m not allowed to correct, in an article my boss altered, pushed out, and doesn’t have to take any flack for.”

Looks like Kotaku is throwing Laura under the bus. I don’t feel bad given as I spell out in my article, she’s a genuinely bad journalist with hugely questionable ethics, but for all the virtue signaling Kotaku is known for, this is definitely quite the development. pic.twitter.com/p8Jzyf2ARx

Here’s a better look at the screencaps. 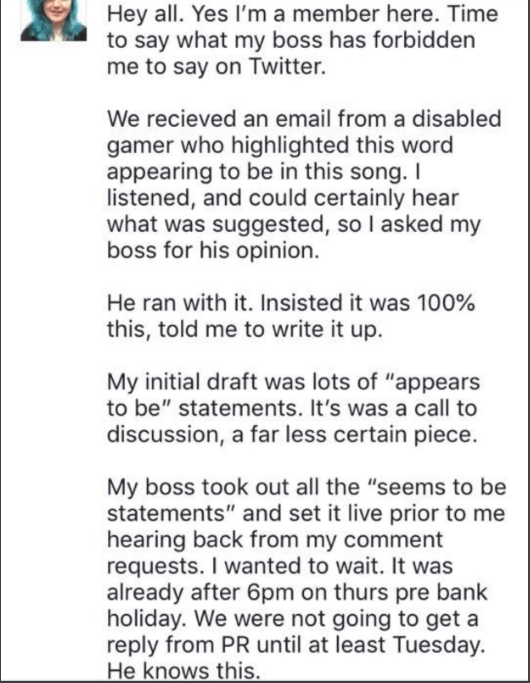 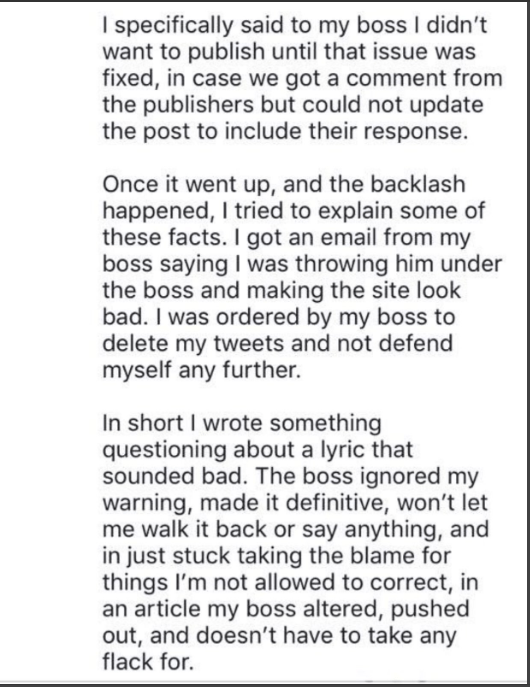 She would also admit on Twitter to having to delete her Tweets.

okay so the author of the Persona Slur lyrics article was given hate because Kotaku published the article before she had a chance to publish it, and she explained it, but it turns out Kotaku forced her to delete it

It looks like we need to change Kotaku’s heart pic.twitter.com/H909vUpXWE

Kotaku UK editor Rich Stanton would pen an article indicating the website had “screwed up with that Persona lyric.”

Stanton does indicate they received word back from Atlus who confirmed that the lyrics do not include the word “retarded.”

Despite the headline and Atlus’ confirmation, Stanton doubles down on the original article arguing, “this does not clear up the confusion over what the singer is actually saying.”

However, he does apologize, “It looks like we got it wrong. We screwed up: sorry.” He concludes, “We hold our hands up with this one: you deserve better, and we’ll strive to do better.”

Despite the apology, Stanton did continue the idea of the original article that the lyric is somehow offensive despite the word “retarded” not being in the song, and it sparked a new wave of criticism from a number of fans.

Liana Kerzner took the publication to task stating, “This is disgusting, shows a complete lack of concern for Kotaku’s staff, and is not at all ethical.”

So @Kotaku_UK publishes an inaccurate piece accusing Persona of bigotry.

The story is wrong. The author of the piece (who may or may not have had her work edited without her consent) gets bombarded by angry people because the article is false. Kotaku, instead of pulling the…

… Article down, creates another article to maximize clicks, while still leaving up the utterly false, defamatory piece accusing the makers of Persona of using a slur.

This is disgusting, shows a complete lack of concern for Kotaku's staff, and is not at all ethical.

What do you make of Kotaku UK’s original article? Do you think it was racist? Do you think their apology was appropriate or do you agree with Liana Kerzner that it was disgusting? Do you believe Laura Kate Dale’s story? Let me know your thoughts!