The official Tomatometer score currently sits at 75% from 32 reviews.

Hannah Woodhead at Little White Lies gives the film 3/5. She writes, “A fun, fanciful film – not for the ages, but never outstays its welcome.”

Chris Nashawaty at Entertainment Weekly gives the movie a C+. He writes, “The main problem is that the film’s gumball-mayhem plot is so frenetic that it’s impossible to determine if it makes a lick of sense.”

Alonso Duralde at The Wrap writes, “Both overstuffed and underwritten, making it seem simultaneously ambitious and lazy, frenzied and sluggish.”

Steve Rose at The Guardian gives the movie a 3/5. He writes, “The inspired casting of the Deadpool actor transforms this from an average Pokémon movie into fun family fare.”

Peter Debruge at Variety writes, “Its box office should demonstrate fans’ hunger for a more robust big-screen version of the Pokémon universe, while the disappointment needn’t dissuade another team from coming along and doing it right.”

Molly Freeman at ScreenRant gives the movie a 3.5/5. She writes, “Detective Pikachu is wholesome, silly fun, with solid world-building and stunning CGI Pokémon that are complemented well enough by its story.”

Grace Randolph at Beyond The Trailer says, “As I tweeted last week, Roger Rabbit meets Blade Runner! – and Ryan Reynolds himself mentioned my comparison on Fallon! ;)”

The film fares much worst on MetaCritic. it currently has a 50 Metascore from 18 critics with 3 positive, 14 mixed, and 1 negative. 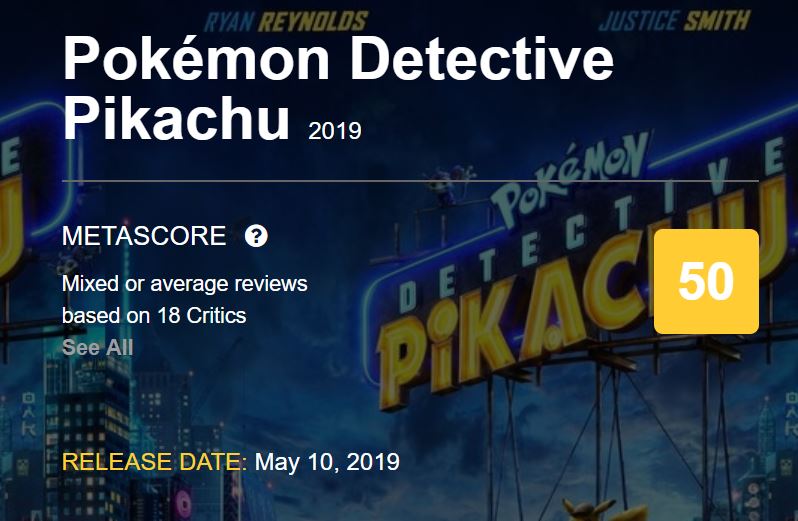 Neil Smith gives the film a 60 at Games Radar. He writes, “Reynolds and Pikachu make an inspired combo in a CGI/live-action mash-up that otherwise adheres to a rigidly boilerplate formula.”

Ryan Oliver gives the film a 67 at The Playlist. He writes, “Detective Pikachu is a fun, occasionally-funny, and almost always-beautiful to look at kids adventure film that doesn’t insult the intelligence of its audience and offers them great, positive lessons that are earned.

Pokémon Detective Pikachu hits theaters on May 10th. The movie starring Justice Smith and Ryan Reynolds is predicted to bring in over $75 million on opening weekend.