In response to reports of employee mistreatment and hostile work place environments, Mortal Kombat 11 developer NetherRealm Studios has indicated that they will open an internal investigation into the troubling claims.

On May 3rd, Variety published an extensive and troubling report which brought light to the allegedly abysmal conditions employees were forced to work under at NetherRealm Studios, specifically in the development cycles of Injustice 2 and the recently released Mortal Kombat 11. According to the full Variety report, behavior such as gender discrimination, an over reliance on the process of ‘crunch,’ and abusive demands of temp employees ran rampant throughout the studio.

Though Variety’s report is recent, reports of unsatisfactory conditions and employee mistreatment by NetherRealm Studios have slowly been coming to light across social media. In the wake of Mortal Kombat 11’s release, both current and former employees began detailing the difficulties they experienced while working for the studio:

it’s been 8 years, and they’ve made it clear to me that I’m persona non grata there anyway so, fuck it: working at NetherRealm on MK9 nearly killed me. I didn’t sleep more than 4 hours for months. from january to april 2011 i was at work more than half of the time

i sat with all the other contract artists in a back room that was stuffed with workstations so they could fit as many temp people as possible.

it was a daily occurrence to hear FT people talk about how many contractors were cramped into that room during crunch cycle.

i and most other contractors, some of the most talented junior-level workers that games have to offer, worked at $12/hour to work on a AAA game

unless you were a woman like me, we got $11/hour

On Glassdoor, a website where current and former employees can provide a review of a given company, it appears that NetherRealm Studios employees have taken issue with the company culture since 2015: 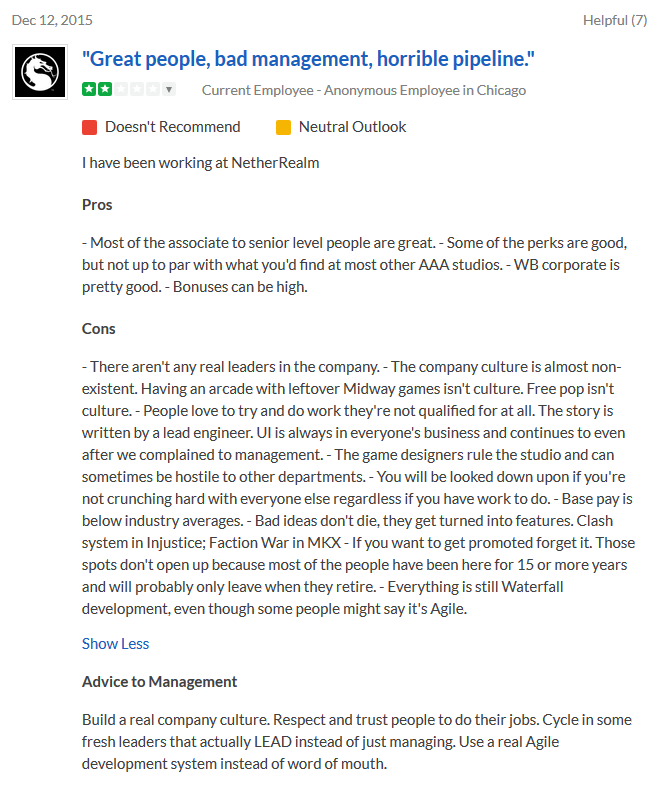 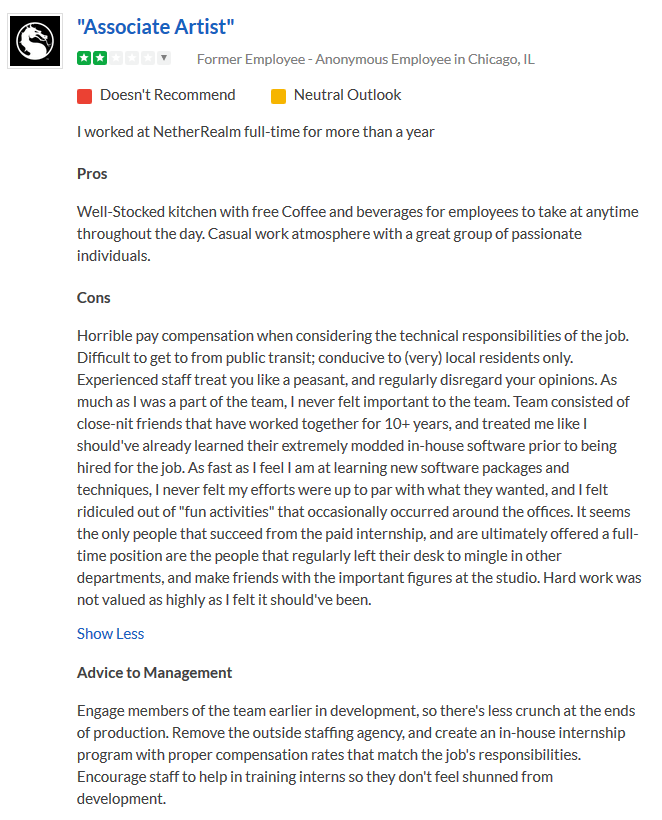 In a statement provided to Variety, NetherRealm Studios claims to be in the process of investigating the numerous allegations, while reaffirming their commitment to a ‘creating a positive work experience’:

“At NetherRealm Studios, we greatly appreciate and respect all of our employees and prioritize creating a positive work experience. As an equal opportunity employer, we encourage diversity and constantly take steps to reduce crunch time for our employees. We are actively looking into all allegations, as we take these matters very seriously and are always working to improve our company environment. There are confidential ways for employees to raise any concerns or issues.”