North spoke to the AV Club stating, “I’m proud that we got a Squirrel Girl book that ran for 58 issues and an OGN.” He added, “’m proud that the character became popular enough to be the core of a cartoon series (Marvel Rising); a novel spin-off series (Squirrel Girl: Squirrel Meets World and Squirrel Girl: 2 Fuzzy 2 Furious); a TV show pilot (New Warriors).”

“But the truth of the matter is that when you’re working on a character in a shared universe, you only have a little time with her, and then someone else will take over. It’s a little like being a parent and watching your kid go off to school for the first time—you’ve done all you can, and you’ll always be in their corner, but now it’s up to them. All you can hope to do—and it’s something I hope we’ve achieved—is to leave your mark on the character in some way. I think Doreen Allene Green is a different person now, 5 years later, than she was when we started with her way back when, and I’m so proud of who she is now.”

Today we’re announcing that the upcoming arc of the Unbeatable Squirrel Girl will also be the last one – bringing the book to a close with issue #50 at the end of this year.https://t.co/UQck2AWNky

Unbeatable Squirrel Girl editor Wil Moss notes that “Squirrel Girl’s greatest impact on Marvel Comics is that it’s proven there’s room for books that are different.” He adds, “Editors and creative teams will always be able to point to the success that this book has had as reasoning for why a new book that doesn’t quite fit the mold is worth publishing. Those new audiences are out there.”

North would also elucidate on this subject, “I hope that [Squirrel Girl] points the way to the realization that comics—even if not especially superhero comics—are for everyone.” He adds, “We can have grim comics and we can have fun comics and we can have comic about a man who puts on an iron suit to fight crime and we can have comics starring a talking squirrel and a woman with a tail who can’t be beaten. It’s the greatest feeling in the world to meet kids (and adults!) for whom this is their first comic, and through it they begin exploring not just other Marvel comics, but the medium in general.”

Your support of Squirrel Girl turned a book about a character everyone thought was a joke into a New York Times bestselling, Eisner-winning all-ages series that’s Marvel’s highest-numbered book outside of Star Wars. WHAT. WHAT EVEN IS THAT. <3

It’s a remarkable run no matter how you cut it, and we wanted to go out on top. There’s one last story to tell. It’s a big one. And I promise it’ll be worth it.

The sales for the book have not been good for awhile. Most recently Unbeatable Squirrel Girl #43 only shipped 10,201 units in April. The debut issue shipped 43,155 in October of 2015. Just a month later the second issue only shipped 23,064 units.

The first trade of their run only shipped 6,838 units in 2015. That trade is currently the 164th best selling Marvel Comic and Graphic Novel on Amazon. 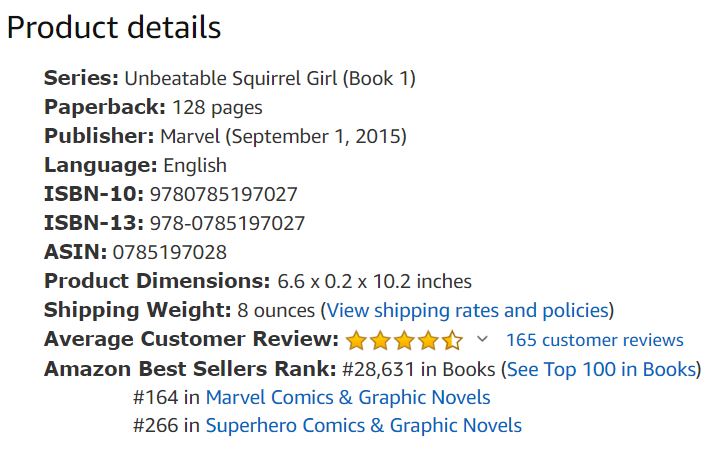 The original graphic novel [easyazon_link identifier=”1302903039″ locale=”US” tag=”boundingintocomics-20″]The Unbeatable Squirrel Girl Beats Up The Marvel Universe[/easyazon_link] that came out in 2016 ranks #1891 in Marvel Comics and Graphic Novels on Amazon. Comichron reports it only shipped 5,052 copies in all of 2016. No issues of Unbeatable Squirrel Girl were even in the top 300 comics for 2016.

Given these poor figures, it’s seems strange for North and Moss to praise the success of the book. Well, Rich Johnston at Bleeding Cool indicates the Squirrel Girl Beats Up The Marvel Universe graphic novel was specifically created so Marvel could “get into Scholastic’s good graces, promising the moon to Scholastic in terms of promotion, supporter, etc.”

It’s quite possible Marvel was selling Unbeatable Squirrel Girl directly to Scholastic and those numbers would not be tracked via Comichron. However, Johnston indicates that relationship went south when Marvel was unable to provide Scholastic with extra copies after they reportedly had strong sales. In fact, he states Marvel was unable to reprint the book for three months.

He does note that the relationship was eventually repaired, but it is interesting considering the poor sales Unbeatable Squirrel Girl had to the direct market.

What do you make of Ryan North’s announcement that Unbeatable Squirrel Girl is ending after issue #50?