Independent journalist Nick Monroe has been suspended from Twitter with the social media website citing ban evasion as the reason for his suspension.

On May 28th, Monroe announced via his Gab account that his Twitter account had been suspended and provided a screenshot of the e-mail sent to him by the website’s moderation team citing their reasoning behind the suspension: 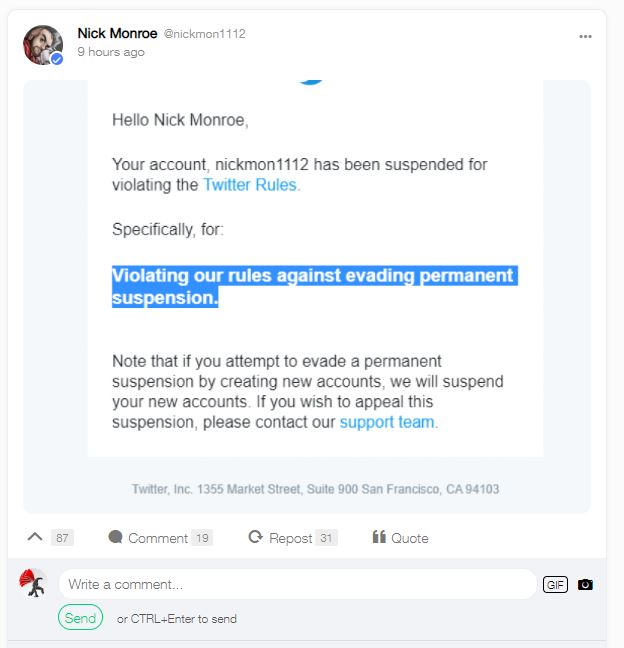 Monroe is an independent journalist whose work runs the gamut of newsworthy topics, informing audiences of and tracking the development of stories such as the recent European elections, the recent assault on Arnold Schwarzenegger, and the role politics has played in the deplatforming of users from Patreon. Monroe was even awarded the second place Kunkel Award in 2016 for ‘Excellence in News Reporting’ by the Society of Professional Journalists for his coverage of the SAG-AFTRA voice actors strike.

Prior to his ban, Monroe’s most chronologically recent thread was a live-commentary of his first viewing of the anime series Jojo’s Bizarre Adventure, but his most recent political thread focused on the recent creation and spread of a false quote attributed to President Trump by political scientist Ian Brenner. Monroe’s coverage of controversial topics has led some to speculate that he was suspended for political or censorious reasons, but as of writing, no evidence has been presented to support these conclusions.

While Monroe claims to have had no concurrently active accounts at the time he was operating his Twitter account, Twitter’s suspension evasion claim may relate to a previous Twitter account, ‘PressFartToContinue,’ which Monroe admits was banned in 2014 due to the swirl of politics and outrage surrounding the Gamergate movement: 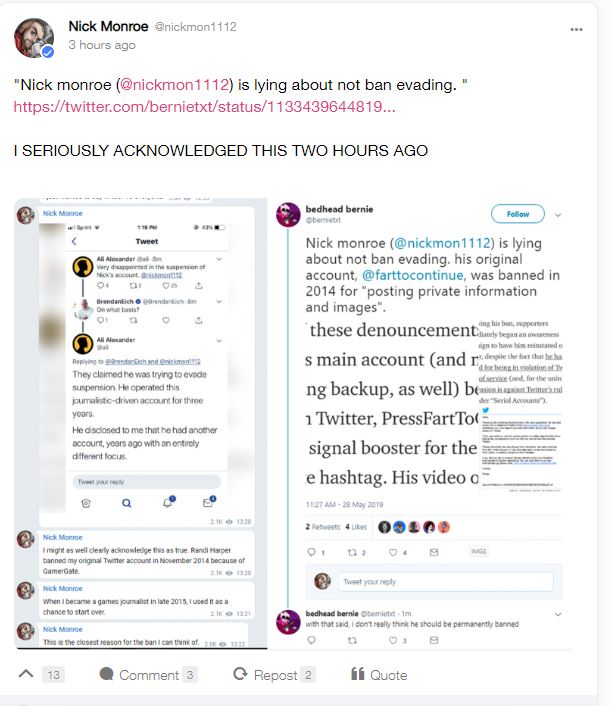 In the wake of his suspension, Monroe has given an interview to Ian Miles Cheong at Human Events discussing his suspension, admitting to operating the former Gamergate-centric twitter account and thanking his audience, stating that “Even if my account is gone forever and there’s no way for me to return, I want to take the time to thank everyone who has accepted my three and a half year long apology.”

What do you make of Twitter suspending Nick Monroe?