Rotten Tomatoes has revealed their Tomatometer score for the latest installment in the X-Men franchise, X-Men: Dark Phoenix.

The Rotten Tomatoes critic score aka the Tomatometer score currently sits at 21% from 71 reviews.

Kambole Campbell at Little White Lies gives the film a 2/5. They write, “We’ve seen this all before.”

Philip De Semlyen at Time Out gives the film a 3/5. He writes, “It’s not nearly as good as ‘Logan’ or ‘X2’, but it’s a whole lot better than the eyeball-poking affliction that was ‘X-Men: Apocalypse’.”

Katie Walsh at Tribune News Service gives the film a 1.5/4. She writes, “What’s truly amazing about “Dark Phoenix” is watching the charismatic, award-winning, star-packed cast flail about in this poorly written nonsense cartoon.”

Soren Anderson at the Seattle Times gives the movie a 2/4. They write, “Phoenix” is a joyless addition to the long-running “X-Men” franchise – 12 movies over 18 years – and one is left with the impression that the series has been too long at the fair.”

William Bibbiani at TheWrap gives the movie a rotten rating. He writes, “In a strange way, it might have been preferable if this was the most embarrassing film in the series, since at least then there’d be a reason to remember it.”

Michael O’Sullivan in The Washington Post gives the movie a 2/4. He writes, “There’s way too much darkness, and not enough quicksilver wit.”

In a surprise twist, the film actually performs quite a bit better on Metacritic. Metacritic critic and user scores are usually lower than Rotten Tomatoes on average.

The Metacritic Metascore currently sits at 44 from 33 reviews. It has 6 positive, 22 mixed, and 5 negative. 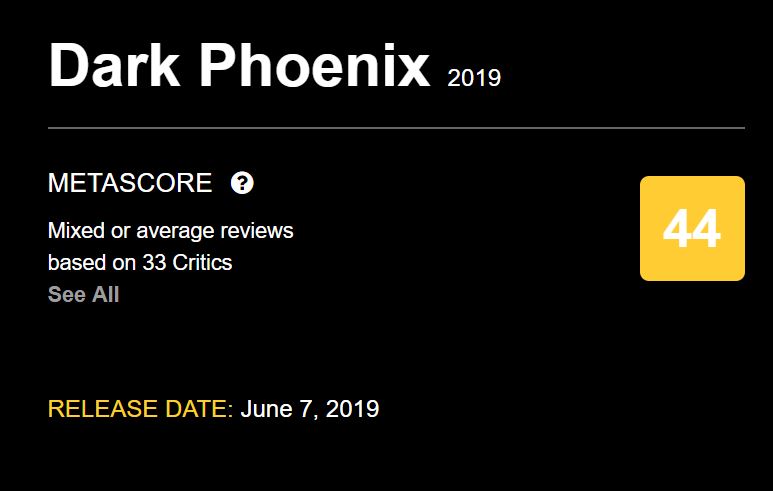 Owen Gleiberman at Variety gives the movie an 80. He writes, “Turner’s damaged conviction holds Dark Phoenix together, giving it a treacherous life force.”

Johnny Olseksinski at the New York Post gives the movie a 63. He writes, “Pretty far-fetched even for a franchise about rare genetic mutations that allow people to read minds and shoot lasers with their eyes. It’s not bad, just crazy.”

Brian Truitt at USA Today gives the movie a 50. He writes, “If this is indeed the end, Dark Phoenix finishes off the X-Men movie saga in frustratingly middling fashion, however fitting for a superhero franchise that only just a few times actually reached its cinematic potential.”

Justin Change in the Los Angeles Times gives the film a 40. He writes, “Amid all the clunky lines, the derivative plot turns and the surprisingly indifferent production values, you can sense this movie striving for something more sensitive and intimate than the usual blockbuster blowout.”

Robbie Collin at The Telegraph gives the movie a 20. He writes, “Superheroes do progressive politics these days as a matter of course, and here it just feels like shtick – a box to be dutifully checked, rather than a theme to be meaningfully explored.”

What do you make of these critic reactions for X-Men: Dark Phoenix? Do you plan on seeing the latest installment in the X-Men franchise?