In response to calls by Vox Media journalist Carlos Maza to ban conservative YouTuber Steven Crowder, YouTube has announced a new set of regulations regarding their Community Guidelines which has already begun to negatively effect various creators across the platform.

On May 30th, Maza took to his personal Twitter account to bring attention to “online harassment” he had been subjected to due to constant coverage by Crowder on his show Louder With Crowder, providing a compilation video of numerous instances of Crowder using undoubtedly uncouth and insulting language in reference to Maza, such as referring to Maza as “lispy queer” and “angry little queer”:

So, I have pretty thick skin when it comes to online harassment, but something has been really bothering me.

Since I started working at Vox, Steven Crowder has been making video after video “debunking” Strikethrough. Every single video has included repeated, overt attacks on my sexual orientation and ethnicity. Here’s a sample: pic.twitter.com/UReCcQ2Elj

In his thread, Maza would then chastise YouTube for failing to take action against Crowder, accusing the video-sharing platform of “helping facilitate a truly mind melting amount of direct harassment” and claiming that their lack of action towards Crowder shows that “YouTube does not give a f*** about queer creators,” but rather favor “conservatives” and “helping incredibly powerful cyberbullies organize and target people they disagree with”:

This has been going on for years, and I’ve tried to flag this shit on several occasions. But YouTube is never going to actually enforce its policies. Because Crowder has 3 million YouTube subscribers, and enforcing their rules would get them accused on anti-conservative bias.

This isn’t about “silencing conservatives.” I don’t give a flying fuck if conservatives on YouTube disagree with me. But by refusing to enforce its anti-harassment policy, YouTube is helping incredibly powerful cyberbullies organize and target people they disagree with.

The attention pointed towards Maza by Crowder is not a new phenomenon but appears to only recently have taken a toll on Maza’s mental well-being. In March of 2018, in response to the same type of content from Crowder that Maza took issue with in 2019, Maza made light of Crowder’s constant rebuttal videos and even joked,  “I need to become so gay that straight people lack the vocabulary to even describe me”: 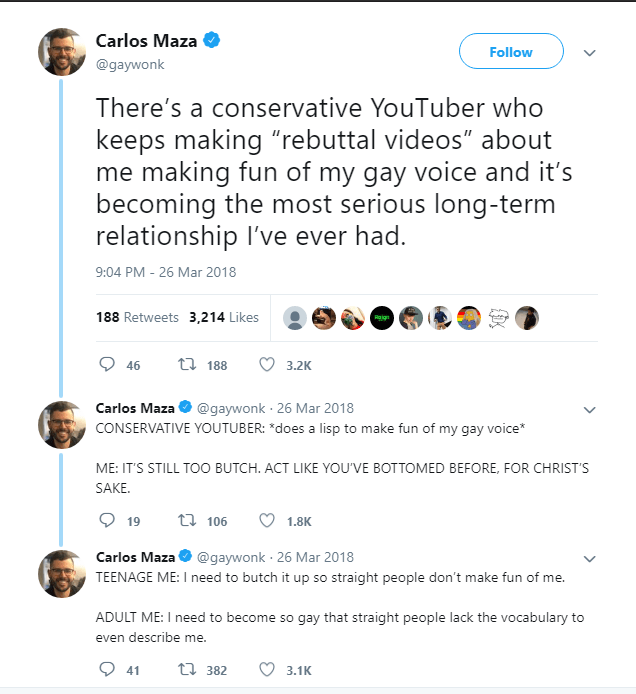 Crowder would respond directly to Maza, defending himself in a video titled VOX is Trying to Ban This Channel… | Louder with Crowder by stating that the rebuttal videos to Vox which Maza considered harassment are about “criticizing their ideas or incorrect assumptions […] fighting bad information with better information” and that his language was “friendly ribbing and genuinely wouldn’t consider [Maza] being that upset about it considering [his] handle is @gaywonk”:

Crowder would also publish a follow-up video mocking the situation titled I’m Sorry, wherein he offers facetious, “long overdue and heartfelt apologies to everyone he’s ever offended,” such as rapper Drake, Justice Ruth Bader Ginsberg, and gangs such as MS-13 and the Latin Kings.

As the demands to deplatform Crowder over homophobia and harassment grew louder from Maza and his supporters across social media, YouTube would respond to the cries of outrage by stating that, after “an in-depth review of the videos flagged,” they would not be removing the videos or Crowder from their platform, as they “don’t violate [their] policies.”

(1/4) Thanks again for taking the time to share all of this information with us. We take allegations of harassment very seriously–we know this is important and impacts a lot of people.

(2/4) Our teams spent the last few days conducting an in-depth review of the videos flagged to us, and while we found language that was clearly hurtful, the videos as posted don’t violate our policies. We’ve included more info below to explain this decision:

(3/4) As an open platform, it’s crucial for us to allow everyone–from creators to journalists to late-night TV hosts–to express their opinions w/in the scope of our policies. Opinions can be deeply offensive, but if they don’t violate our policies, they’ll remain on our site.

(4/4) Even if a video remains on our site, it doesn’t mean we endorse/support that viewpoint.

There are other aspects of the channel that we’re still evaluating– we’ll be in touch with any further updates.

However, the response by YouTube only led to further outrage against the platform, leading YouTube to capitulate and disable monetization on Crowder’s channel. Confusingly, though YouTube claimed Crowder was demonetized for “a pattern of egregious actions [that] has harmed the broader community.” They would later state that his monetization would be restored if he removed a link to purchase shirts which read “Socialism is for Figs,” with the word ‘figs’ standing in for a homosexual slur:

Update on our continued review–we have suspended this channel’s monetization. We came to this decision because a pattern of egregious actions has harmed the broader community and is against our YouTube Partner Program policies. More here: https://t.co/VmOce5nbGy

Maza would respond to the demonetization announcement:

So the fuck what. Basically all political content gets “demonetized.”

Crowder’s revenue stream isn’t from YouTube ads. It’s from selling merch and “Socialism Is For Fags” shirts to millions of loyal customers, that @YouTube continues to drive to his channel. For free. https://t.co/ws8mqvRoKU

To clarify, in order to reinstate monetization on this channel, he will need to remove the link to his T-shirts.

Amidst the conflict between Maza and Crowder and the growing outrage from various factions towards YouTube, YouTube announced that they would be “making several updates” to their policies in response to these recent events. In an official blog post, YouTube indicated that they would be “removing more hateful and supremacist content from YouTube”, “reducing borderline content and raising up authoritative voices,” and “continuing to reward trusted creators and enforce our monetization policies.”

“Today, we’re taking another step in our hate speech policy by specifically prohibiting videos alleging that a group is superior in order to justify discrimination, segregation or exclusion based on qualities like age, gender, race, caste, religion, sexual orientation or veteran status. This would include, for example, videos that promote or glorify Nazi ideology, which is inherently discriminatory. Finally, we will remove content denying that well-documented violent events, like the Holocaust or the shooting at Sandy Hook Elementary, took place.

As we do this, we’ll also start raising up more authoritative content in recommendations, building on the changes we made to news last year. For example, if a user is watching a video that comes close to violating our policies, our systems may include more videos from authoritative sources (like top news channels) in the “watch next” panel.”

In the case of hate speech, we are strengthening enforcement of our existing YouTube Partner Program policies. Channels that repeatedly brush up against our hate speech policies will be suspended from the YouTube Partner program, meaning they can’t run ads on their channel or use other monetization features like Super Chat.”

As these new policies become implemented within YouTube’s ecosystem, some have taken to calling this development the “Vox Adpocalypse” as a wide-range of users and channels have noted that they have been unfairly demonetized by these new rules, such as Mr Allsop History, a channel which provides educational resources for various historical topics (thankfully, this channel has since been restored, albeit with one video still removed and numerous flags still present):

YouTube have banned me for ‘hate speech’, I think due to clips on Nazi policy featuring propaganda speeches by Nazi leaders. I’m devastated to have this claim levelled against me, and frustrated 15yrs of materials for #HistoryTeacher community have ended so abruptly.@TeamYouTube

Having looked into what might have happened, I’ve found this blog post from YouTube published today. https://t.co/NsmGgIZKg9 Reading this, though, I struggle to see how any of the videos on my channel fit their criteria for an outright ban.

Ford Fischer, Editor-in-Chief of News2Share whose channel documented activism and extremism and whose videos have been featured in numerous films was also effected.

Within minutes of @YouTube‘s announcement of a new purge it appears they caught my outlet, which documents activism and extremism, in the crossfire.

I was just notified my entire channel has been demonetized. I am a journalist whose work there is used in dozens of documentaries. pic.twitter.com/HscG2S4dWh

Youtube is providing cover for the very people they claim to be combatting when they cast a wide net that removes every kind of content creator.

When Youtube demonetizes @scrowder and I in the same purge, they create a false equivalence. https://t.co/dPkmKhCDKC

YouTuber Keemstar also published a Tweet featuring a sample of creators who had been demonetized while also claiming that he “can’t keep up!”

Channels are being fully demonetized at a insane rate. I can’t keep up! #VoxAdpocalypse pic.twitter.com/j7EdwzKvMp

This not the first time that Vox Media or one of their employees has taken action against YouTube or a specific YouTuber due to disagreements with content. After Vox published a PC building tutorial video, YouTube channel ReviewTechUSA criticized their video for its misleading information and instructions, some of which could have cost users thousands, leading to Vox attempting to falsely DMCA strike the channel and accuse one of the hosts of being a racist before being losing the DMCA dispute and issuing a ‘non-apology’ to the channel.

PewDiePie has been a constant target of Vox as they attempt to paint him as an anti-semite and white supremacist, even attempting to imply that PewDiePie directly supported and influenced the Christchurch terrorist.

Vox so frequently takes issue with YouTube that, in the wake of Maza’s campaign against YouTube, Reddit user Dwavenhobble has begun compiling a living documentation of “Every Time a Vox property has gone after youtubers or youtube before.”

Despite the various actions taken by YouTube in response to his demands, Maza currently remains unsatisfied with the responses, particularly in regards to Crowder’s continued presence on the platform. Maza has continued to discuss the issue in multiple Tweets on his personal Twitter account and has accused YouTube of telling “queer and non-white creators that abuse and harassment is the price you pay for engaging in politics.”

.@YouTube has decided that being targeted by racist and homophobic slurs is acceptable as long as its part of a bigger debate.

Essentially telling queer and non-white creators that abuse and harassment is the price you pay for engaging in politics.

This is why @YouTube has become such a toxic dumpster fire.

The platform normalizes hate speech by treating it like part of regular political discourse.

Queer people and people of color shouldn’t have to endure abuse just to participate in controversial discussions.

It’s creating a platform where only monsters feel safe enough to talk about shit that actually matters.

What do you make of Carlos Maza’s actions? What do you think about YouTube’s response in demonetizing numerous channels?