Fans and backers of the upcoming Shenmue III are outraged following the surprise E3 announcement that the game would launch as an Epic Games Store exclusive.

On June 10th, fans who tuned in to watch the PC Gaming Show showcase at the 2019 E3 expo were not only presented with the latest trailer for the long-awaited Shenmue III, but also with a shocking announcement at the end of the trailer that the game would be releasing exclusively on the Epic Games Store storefront for PC platforms:

While the Shenmue III Kickstarter page does not currently list a specific platform for it’s PC release, according to fans, the game was originally promised to be delivered as a digital download for Valve’s Steam platform:

Uh excuse me @kickstarter @Shenmue_3 @deepsilver this is what my receipt say’s and it’s what I want and paid for #shenmue3 pic.twitter.com/NBYRMO3b3T

The existence and operation strategies of the Epic Games Store have been a source of recent conflict across the gaming community, as publishers enticed by the larger profit-share and monetary compensation for exclusivity contracts given by the platform clash with gamers who feel that the storefront is unnecessary and that the exclusivity deals hurt the consumers.

Following this announcement, outraged fans began to bombard the game’s Kickstarter page with complaints, criticism, and demands for refunds:

it’s always been Steam in all surveys regarding the pledged version, and the physical copy was supposed to be a KS exclusive one. Even if it’s a fantastic KS limited box, if it just points me towards EGS I’ll feel scammed.

We’ve been patient, very patient (4 years), why are you defecating on us like that?

I get doing the Epic exclusive thing since they threw a ton of money, but not offering refunds to people who are protesting the Epic store is beyond scummy.

I feel bad that I contributed to this garbage. I hope you change your mind and offer refunds.

“Shenmue 3 will be released on Steam in the future. ” According to the FAQ on the official website. If this is the case then I expect to receive my Physical Steam Disc in a Kickstarter Exclusive Case, like I asked, and what it STILL says on my fangamer survey, in the future as well.

Thats a lot of comments in the span of one day, but what do you care I guess right? You got Epic money now. Hey, I wonder what epic would have said if you came to them with just an idea like you guys did years ago when you needed money fund this game. You think Epic would fund it like we all did or give a crap? Really makes you think.

One fan on the game’s still-live Steam page asking for a refund for their contribution to the Kickstarter was informed by the Shenmue III support team that, much to the chagrin of the disappointed users who were expecting to receive a Steam key, refunds would not be granted: 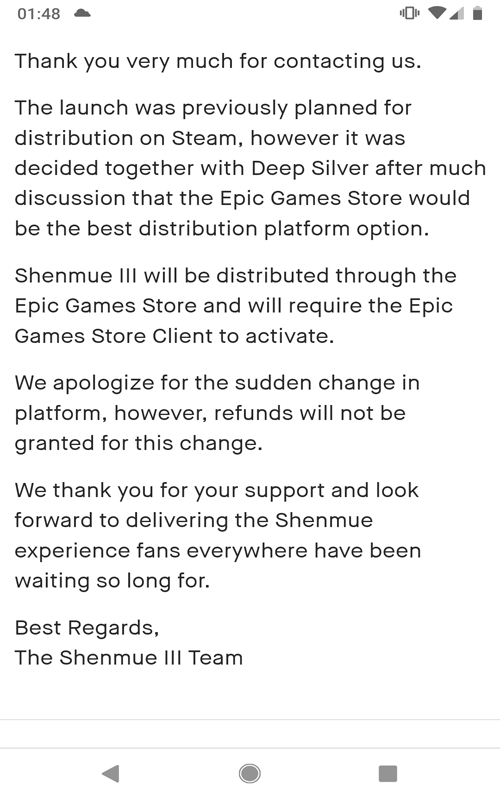 A screenshot provided by Steam user Homer Morrison of the alleged response received from the Shenmue III support team after asking for a refund.

However, according to a Deep Silver PR rep who later spoke with PCGamer, they are aware of the fan feedback and are considering their options for providing refunds, though no concrete plans have been confirmed:

“I know at the moment [Deep Silver is] listening to what the Kickstarter community is saying and looking into it. They hear what people are saying, and they’re looking into it.”

What do you make of Deep Silver and Shenmue III’s decision to go exclusive with the Epic Games Store?