Reddit has quarantined one of the largest forums of Donald Trump supporters on the internet, The_Donald subreddit.

The_Donald, the largest Trump supporting subreddit and one of the largest ones on Reddit as a whole has been quarantined meaning they are very close to being shut down. Social Media is doing everything in its power to get Trump out of office in 2020. https://t.co/YPs0b1ZQt2

If one goes to the subreddit today you’re greeted by the following message: 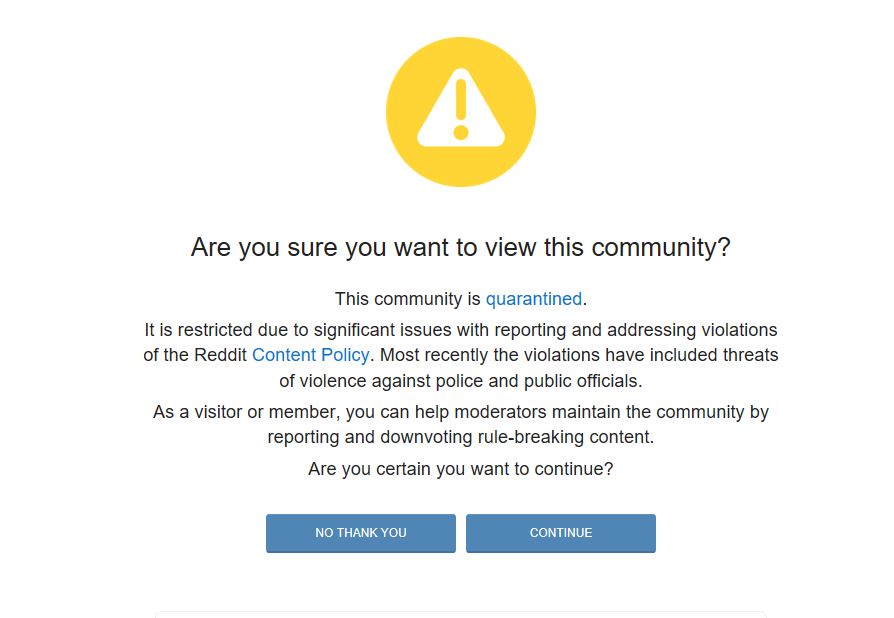 User Shadowman3001 posted Reddit’s reasoning for quarantining the subreddit in a stickied thread at the top of the subreddit. It reads:

We want to let you know that your community has been quarantined, as outlined in Reddit’s Content Policy.

The reason for the quarantine is that over the last few months we have observed repeated rule-breaking behavior in your community and an over-reliance on Reddit admins to manage users and remove posts that violate our content policy, including content that encourages or incites violence. Most recently, we have observed this behavior in the form of encouragement of violence towards police officers and public officials in Oregon. This is not only in violation of our site-wide policies, but also your own community rules (rule #9). You can find violating content that we removed in your mod logs.

As we have discussed in the past, and as detailed in our content policy and moderator guidelines, we expect you to enforce against rule-breaking content. You’ve made progress over the last year, but we continue to observe and take action on a disproportionate amount of rule-breaking behavior in this community. We recognize that you do remove posts that are reported, but we are troubled that violent content more often goes unreported, and worse, is upvoted.

User reports and downvotes are an essential way that Reddit functions to moderate content. Limiting or prohibiting them prevents you from moderating your community effectively. Because of this, we are disabling your custom styling in order to restore these essential functions.

As stated in our Moderator Guidelines, our goal is to keep the platform alive and vibrant, as well as to ensure your community can reach people interested in it. Accordingly, here are the specific terms of the quarantine and the next steps we are asking from you as a mod team to resolve this situation.

Visitors to this community will see a warning that requires users to explicitly opt-in to viewing it. This messaging reminds users of the importance of reporting rule-breaking content.

Custom styling has been disabled to restore the report and downvote buttons.

We hope both these changes will help improve the signal around rule-breaking content and improve your ability to effectively address it.

You unambiguously communicate to your subscribers that violent content is unacceptable.

You communicate to your users that reporting is a core function of Reddit and is essential to maintaining the health and viability of the community.

Following that, we will continue to monitor your community, specifically looking at report rate and for patterns of rule-violating content.

Undertake any other actions you determine to reduce the amount of rule-violating content.

Following these changes, we will consider an appeal to lift the quarantine, in line with the process outlined here.

We hope that this process provides a viable way forward to restore the health of the community. However, if this situation continues to escalate, we will explore further actions, including the possible banning of your community.

Please confirm that you have received and understand this message.”

“This is a list of what Reddit has removed in the last 30 days. If you count, not including the admins stripping me of most of my permissions, it amounts to fewer than one/day.”

Shadowman3001 then notes he believes this move to quarantine the subreddit is to “set up an impossible standard as a reason to kill us before the 2020 election.”

Shadowman3001’s claim does have some legitimacy to it. The far left subreddit, ChapoTrapHouse routinely promotes violence against anyone who does not align with their ideals. Just recently, there were multiple people praising the idea of murdering corporate executives. They’ve also pushed raiding a ICE facility and committing violence against the United States. No action, has been taken by Reddit against this subreddit.

As to why Reddit decided to take action against The_Donald it appears to once again be the work of Vox Media and former Media Matters employee Carlos Maza.

Maza campaigned against The_Donald via Twitter yesterday calling for the subreddit to be shut down.

It’s shut down subreddits before.

So why hasn’t it done anything about the “The_Donald,” the largest pro-Trump subreddit, which is littered with calls to violence? https://t.co/AmAvuSGy0X

Not only did Maza campaign against The_Donald, but the far-left media group Media Matters targeted the subreddit as well.

Media Matters has made it their mission to attack conservatives and people who disagree with their ideas. In fact, that’s actually their stated goal on their website:

“Launched in May 2004, Media Matters for America put in place, for the first time, the means to systematically monitor a cross section of print, broadcast, cable, radio, and Internet media outlets for conservative misinformation – news or commentary that is not accurate, reliable, or credible and that forwards the conservative agenda – every day, in real time.”

This isn’t the first time Maza has targeted conservatives this month. He most recently went after Steven Crowder and attempted to get YouTube to deplatform him. His woe-is-me victim tactics did work to an extent as YouTube demonetized Steven Crowder.

This is the latest move in censorship from the Big Tech companies against conservatives. They launched their initial wave of censorship against Alex Jones and have gradually been spreading it throughout the internet. Most recently Pinterest was outed by Project Veritas for censoring pro-life content, Knitting website Ravelry banned pro-Trump content, and most recently Google executive Jen Gennai admitted the tech giant has plans to meddle in the 2020 elections to ensure the “next Trump situation” does not happen.

What do you think of this quarantine of The_Donald subreddit? Is this yet another step by big tech to remove conservative voices from the internet? And do you believe that this is just the first step to an outright ban of the subreddit?