A key witness to the alleged hotel room assault between Dragon Ball Super: Broly voice actors Vic Mignogna and Monica Rial, has submitted an affidavit in which he claims to have “no memory of the events described.”

Stan Dahlin, the former owner of the Izumicon convention, has been regularly cited in Rial’s recollection of events, was cited in her recent deposition as the one who interrupted the alleged assault by Mignogna:

I was frightened, I was scared, I didn’t know what to do. When I was 15 I had fought back and that didn’t end well for me, so I just kinda went along with it, knowing any minute Stan would open the door, and he kept kissing me and kinda pushed me back on to the bed and actually got on top of me and I still have a very visual, like a nightmare, actually, the feeling of looking at the door and thinking “How do I get out of this? How do I get out of there without ruining the friendship we had built?” And then Stan came to the door, and when Stan came to the door, he jumped up and ran to the door and I kinda covered my face, because being pale, if anything’s happening you can see it all over my face. Stan came in, he asked me as we were leaving, you know, “Are you okay?” I said “Oh yeah, yeah, I’m fine.” and just kind of kept covering my face.

However, on July 18th, Dahlin submitted an affidavit to the court stating that not only did he have no memory of the event or Rial’s distressed emotional state upon leaving Mignogna’s room, but also that the two were invited to Izumicon several times after this event as Dahlin was not aware of the alleged assault: 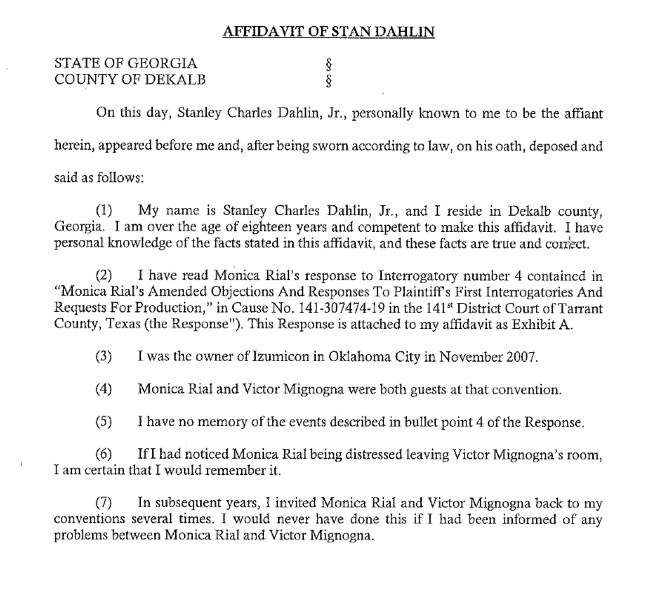 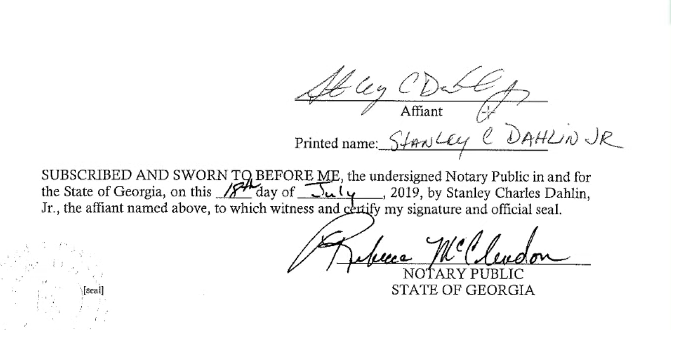 In his affidavit, Dahlin specifically notes that he has no memory of the evens in ‘Interrogatory number 4’ in Monica Rial’s Amended Objections and Responses To Plantiff’s First Interrogatories And Requests For Production, an Interrogatory which explicitly names Dahlin as a key player to the events which occurred in 2007:

INTERROGATORY NO. 4. Identify the instance in “the  mid-2000s”—including  the  name of the convention—when Plaintiff “grabbed [you] and kissed [you] in his hotel room” as you alleged in the tweet you posted to @Rialisms on February 19, 2019.

Subject to, and without waiving, the aforementioned objections, Defendant answers as follows:

• Plaintiff grabbed and kissed Defendant without Defendant’s consent on Sunday, November 4th, 2007 while Plaintiff and Defendant were both attending Izumicon in Oklahoma City, Oklahoma.

• Plaintiff continued in this fashion for several minutes, despite Defendant’s fear and shock, until Mr. Dahlin knocked on Plaintiff’s hotel door. Plaintiff left Defendant on the bed, and hurriedly answered the door. Mr. Dahlin inquired whether Defendant was ok, clearly noticing distress. Defendant, however, was too shocked and afraid to admit to what had occurred.

• Following dinner, Plaintiff forced Defendant to speak with Plaintiff’s longtime fiancée on the telephone, and Plaintiff spoke with his fiancée as if nothing had happened.

Following the submission of his affidavit, Dahlin also discussed the case on his Twitter account, noting specifically that he was “surprised” to hear the name of someone who “did not like Vic even before this case” referenced in Mignogna’s deposition:

In Vic’s depo I was surprise to hear JSean ask about one name (other than mine) and whether he thought they were truthful. Nearly knocked me off my seat. What would this person have to offer to this case?

What I do know about this person is that they did not like Vic even before this case. Why? God only knows.