Titans is the flagship show of the still rather new DC Universe streaming service and app. Though the service underwent ups and downs in the last year, a second season for its inaugural original was assured.

Major changes are coming in Season 2, not the least of which is the introduction of Batman, Slade Wilson, and Superboy. (Related: First Look at Ravager and Aqualad for DC Universe’s Titans Season 2 Revealed!)

We will also see developments to existing characters especially Starfire, played by Anna Diop. Her hairstyle, for one, received a makeover.

Diop gave her followers a glimpse behind the scenes on her Instagram and she now sports straight locks. In a very short video of a teaser or daily, she shows off her new hair. She also celebrated reaching 200,000 followers. Take a look.

Diop rocked curly hair in the first season when Starfire struggled to remember who she was and joined the team. But, she left them behind some time ago to prep for the new season and has treated her followers to candid shots for the past several months. Below are a few.

In the comics and other media, Starfire’s hair is typically straight even while her body is one big mass of energy. Due to this, the curls met with backlash from fans. (Related: First Look: Joshua Orpin as Superboy in DC Universe’s Titans Season 2) 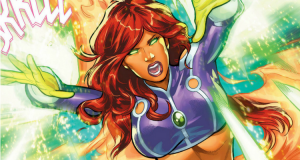 Filming of Titans Season 2 was briefly delayed by the accidental death of a stunt technician but will premiere on schedule in September. Titans airs on DC Universe. New episodes are made available every week in a typical broadcast format.