The massive amount of negative feedback in regard to EA’s explanation as to why certain characters in Star Wars Battlefront II were locked behind microtransactions has been recognized as the “most-downvoted comment on Reddit” in the latest edition of The Guinness Book of World Records.

In November 2017, /u/MBMMaverick took to the /r/StarWarsBattlefront subreddit to complain about the fact that, despite having paid the full retail price for Star Wars Battlefront II, the iconic Sith Lord Darth Vader would be locked behind microtransactions:

Seriously? I paid 80$ to have Vader locked?

This is a joke. I’ll be contacting EA support for a refund… I can’t even playing f****** Darth Vader?!?!? Disgusting. This age of “micro-transactions” has gone WAY too far. Leave it to EA though to stretch the boundaries.

This complaint garnered a response from EA’s community team, who attempted to explain their reasoning behind the microtransaction system:

The intent is to provide players with a sense of pride and accomplishment for unlocking different heroes.

As for cost, we selected initial values based upon data from the Open Beta and other adjustments made to milestone rewards before launch. Among other things, we’re looking at average per-player credit earn rates on a daily basis, and we’ll be making constant adjustments to ensure that players have challenges that are compelling, rewarding, and of course attainable via gameplay.

We appreciate the candid feedback, and the passion the community has put forth around the current topics here on Reddit, our forums and across numerous social media outlets.

Our team will continue to make changes and monitor community feedback and update everyone as soon and as often as we can.

This response led to a flurry of backlash against EA and Star Wars Battlefront II. The phrase “the intent is to provide players with a sense of pride and accomplishment” became a meme among video gaming communities.

Players felt compelled to calculate the exact amount it would cost to unlock all of Star Wars Battlefront II’s content in order to expose EA’s ridiculous pricing system, finding that the total price would be 4,500 hours of playtime or $2100. Though the backlash led to the removal of microtransactions from the game, the initial implementation of this system was a major factor in the recent discussions regarding the ethical aspects of loot boxes within the British Parliament. (Related: Loot Boxes and FIFA 19 Character Packs Do Not Constitute Gambling According to UK Gambling Commission)

However, the best indicator of players’ dissatisfaction with this predatory system and disingenuous reasoning for its existence is the amount of downvotes the single comment has. At current, the post holds a total of 667,817 downvotes (along with 6 Platinum awards, 114 Gold awards, and 85 Silver awards, in an ironically humorous move by the subreddit users). This sets it apart from the next-most-downvoted comment, a humorous post asking for downvotes to parody Thanos’ “perfectly balanced” philosophy from Avengers: Infinity War with a total of 88,906 downvotes, by an expansive margin. (Related: US Senator Josh Hawley Introduces Anti-Loot Box, Anti-Microtransaction Bill to US Senate)

To commemorate EA’s record-holding comment, The Guinness Book of World Records included an entry on the comment in the 2020 edition of their annual record book: 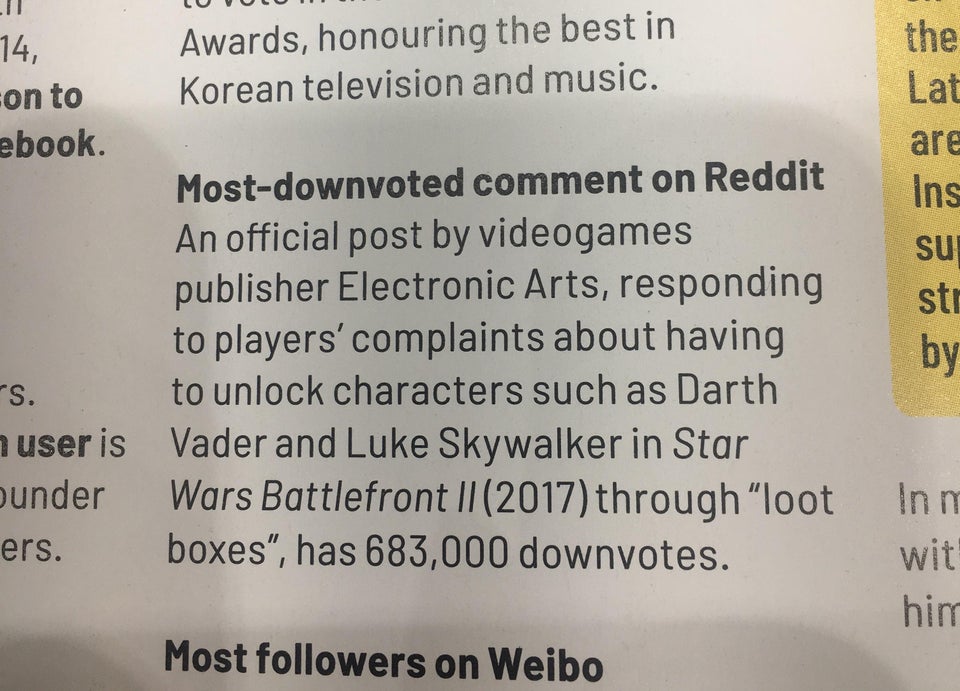 A picture of the entry in The Guinness Book of World Records 2020 as provided by /u/-amash- on the /r/StarWars subreddit.