A lead dev, and by association the entire production of the indie role-playing game Heartbeat, has been accused by transphobia due to comments made by the girlfriend of said dev regarding transgender individuals.

Around midnight on September 20th, a Twitter user by the handle Nikotine posted a thread discussing how they personally felt “ashamed to be born” in America due to the recent social focus on transgender activism, labelling male-to-female transgender individuals as “men [who] believe they can mutilate their penis and dress in an “effeminate” manner to become “female:”

I have never been so ashamed to be born in this country until now. America,, a place where men believe they can mutilate their penis and dress in an “effeminate” manner to become “female”.

You are not a lesbian. You are not female. Lesbians don’t like penis no matter how you chop it up. You can surgically mold your penis into the Eiffel Tower if you want. You’re not going to become France. You’re not impressing anyone.

You are a straight man fetishizing lesbians to the point of trying to become one yourself. The problem? You can’t. If a lesbian likes your dick or your “vagina”, she is not a lesbian. Men can’t be lesbian.

While Nikotine is not a member of the Heartbeat dev team, she is both a well-known fan-artist within the game’s community and the girlfriend of lead dev and artist Shepple.

Nikotine quickly faced backlash for her opinions, with many who felt offended by her comments directing accusations of transphobia towards Heartbeat and the developers due to a perceived guilt by association:

So woke up this morning to find out one of my previously favorite #heartbeatrpg artists has gone full TERF. Seriously, all of my no. Transphobia has no place in gaming. Trans people belong, people like this should be shamed out. pic.twitter.com/QPLCOfR8z5

Important Note Bene: Nikotine is not one of the #heartbeatrpg devs. She is a fan artist. My apologies for the lack of clarity.

A Chumbosoft dev reached out privately and asked me to clarify that. Also they don’t agree with Nikotine, please don’t go after the individual devs.

it hurts me to say that since i used to love heartbeat but please don’t support #heartbeatrpg. its devs are transphobic folks and the “separate art with artist” shouldn’t be considered on this. you’re giving transphobic people money and recognizement.

To all of my followers/mutuals, or anyone else in the #lgbtq community..If any of you have supported #heartbeatrpg, I implore you to please reconsider doing so, in lieu of recent transphobia views that were given. pic.twitter.com/wVlFcXWdkf

Honest thoughts on the #heartbeatrpg thing? You are who you hang around. Even if it’s not the dev, but the dev’s gf who’s a transphobe? Spending time and having a close relationship with someone like that is not great

One user even called for others to submit complaints en masse to the Better Business Bureau in an attempt to “see Heartbeat fail as a game” due to Nikotine’s comments:

(I wont reveal addresses or last names, but please consider this as purely informational and not to be used for violence, abuse, etc.) but the CEO is Trishia. If any of you would like, Anaheim, CA is where the LLC was filed under. pic.twitter.com/ZCEoVPGpRM

What I wish to gain from this post is to see Heartbeat fail as a game, to see TERFs be punished for their hateful speech, and to repay what the creator dished out. You want to attack innocent people, well, I’m not okay with that.

Following the initial outrage towards Nikotine, an accusation of transphobia against Shepple made by a former friend resurfaced:

Hmm Monster Trainer is on Hiatus until I can figure out how I want to proceed. A lot of my motivation came from [email protected] but Shepl ended up being very transphobic and used our friendship as a shield so I’m rethinking things

She and some others in a secret channel on the heartbeat discord were cracking transphobic jokes, and talking about me and some of the young trans girls on the server behind our backs. Eventually sheppl made everyone so uncomfortable everyone left

This was after I tried to talk to her and explain how some of the things she said in the general chat were very off putting to her large trans fan base. I thought I had gotten through to her only to find out about the secret channel

Screenshots of Shepple’s alleged transphobic discord statements were also shared. In the screenshots, Shepple’s rhetoric appears to be more curious as she attempts to reconcile her personal feelings on the matter, though it is currently unknown if these are the only Discord communications she had regarding the topic or if this is the extent of her opinions: 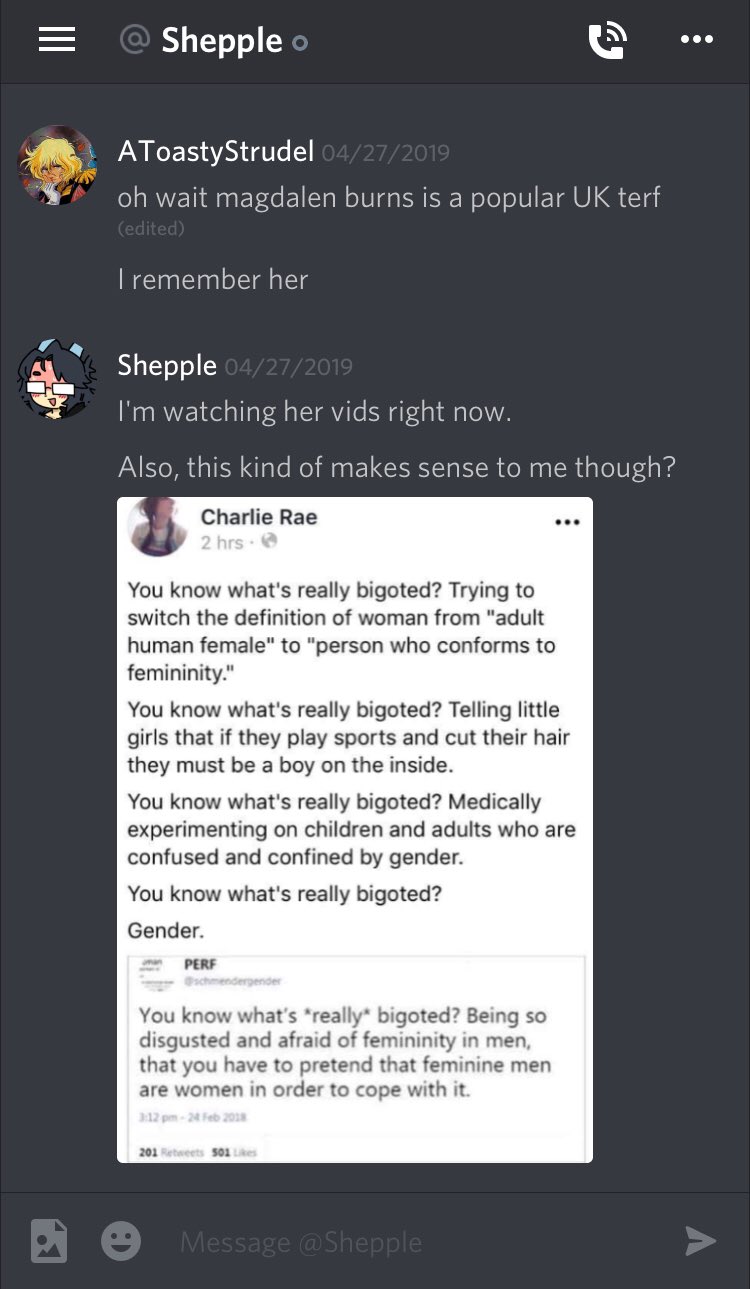 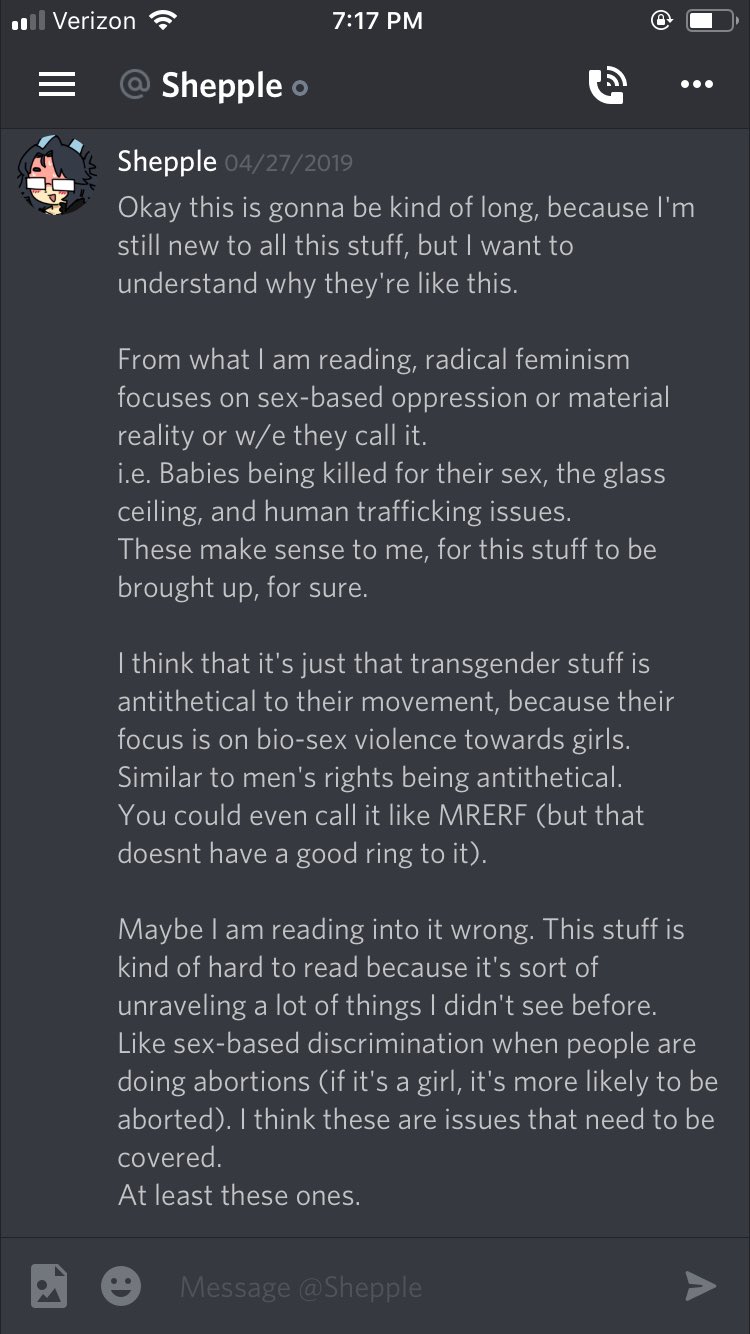 Social media users outraged at the comments made by the lesbian couple soon took to Steam in an attempt to review bomb Heartbeat, resulting in a total of 24 negative reviews referencing this event before Steam reversed the review bombing and classified it as a “period of off-topic review activity.”

Since the backlash began, Nikotine has remained unmoved in her opinions, and has stated that her “personal views on gender ideology and the trans community have nothing to do with my girlfriend’s game.”

My personal views on gender ideology and the trans community have nothing to do with my girlfriend’s game. #HEARTBEATRPG has no attachment to this, but I guess once you share your opinion on something, they have to start a witch hunt on you and everything you know.

Oh! Also, anyone is free to follow or unfollow me. I don’t much care, but since it seems no one is actually leaving on their own accord, and it’s really the TRA’s or something telling my followers in DM. Shows how sleazy people in the community are, huh? pic.twitter.com/yqkbaO68Ie

Shepple has yet to comment on the matter, as according to her Twitter account, she is currently taking some time away from her social media accounts to process the passing of relative.