Around the Galaxy, a Star Wars podcast focused on the community and individuals in the Star Wars fandom, faced a mounting wave of pressure and harassment after announcing that a member of the Fandom Menace would be a guest on an upcoming episode, ultimately resulting in the episode being cancelled.

Pete Fletzer, host of Around the Galaxy and a former contributing editor to the Star Wars Galaxy magazine, first encountered the Fandom Menace, a self-titled and self-identifying group of Star Wars fans unhappy with the direction Disney has taken the Star Wars franchise, in August after embarking on a Twitter rant regarding the reactions fans had to the announcement of Star Wars: Galaxy’s Edge hotel pricing in Disneyworld: 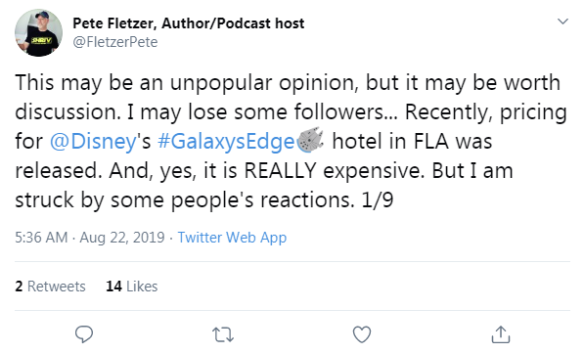 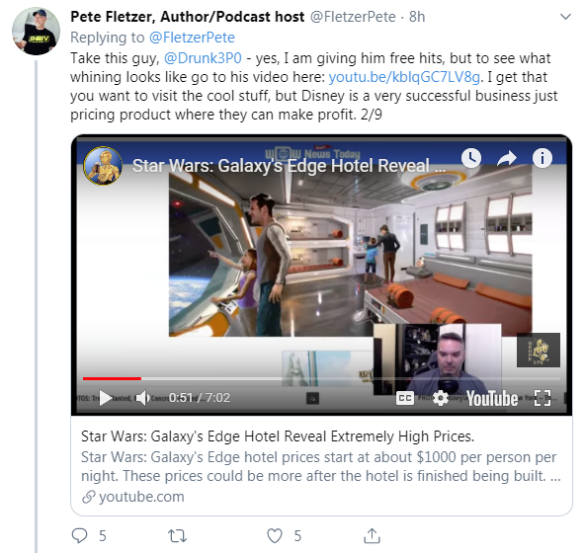 After receiving a fair amount of backlash from the Fandom Menace, Fletzer deleted his thread. However, after Fletzer directly targeted a video made by Fandom Menace member and Youtuber Drunk3P0 in his rant, Drunk3P0 responded by reaching out to Fletzer and attempting to engage in a good-faith discussion of the opinions held by either side of the Star Wars fandom. This led to Fletzer inviting Drunk3P0 to speak about the divide within the fandom on the Around the Galaxy podcast:

What if you had a run-in with someone on twitter who identified as part of #TheFandomMenace & instead of continuing the online pissing match that happens in social, they invited you to pick up the phone? And you agreed. Find out next week on @atgcast… It might surprise you.

However, despite Fletzer’s good intentions and desire to promote good-faith conversations with those who hold differing opinions, Star Wars fans bombarded his mentions with insults directed towards the Fandom Menace and denouncements of Fletzer’s attempt at civil conversation:

I think the fact that I’m not sure how my podcast’s fans will respond to my interview with a Fandom Menace voice is additional proof that social media is a deceptively complex place to have a multi-faceted discussion.

The fandom menace is a group fueled by hate, harassment and self entitlement. Dunno why anyone would want to give them a platform. They’re pathetic people who want to destroy the thing they claim to love. That’s a no from me.

Inviting someone who make minority’s and lgbtq voices feel unwelcome only legitimizes them. This is very disgusting on your behalf, so shame on you.

these people have harassed, doxxed and attacked so many in the fandom, they are filled with anger and hatred and have said vicious things about women who don’t agree with them (most), lgbt and poc members of the fandom. you giving them a platform is insulting beyond measure.

If only someone could’ve had Hitler on their podcast during WWII. Only then would we understand where he was coming from. Terrible take to create controversy and get a few extra downloads.

Being able to talk about these things in a detached manner is a privilege.

Facing a growing wave of vitriol and anger, Fletzer announced that he and Drunk3P0 had mutually agreed that it was “in the best interest of all parties to not release this episode at this time” while still asserting his desire to see a “mending [of] the gap among Star Wars fans”:

In light of the very active feedback and expression of concern from the community, @Drunk3P0 and I have spoken a number of times throughout the day about the division being caused by the next planned @AtGcast episode. 1/4

He and I have agreed that it is in the best interest of all parties to not release this episode at this time. It seems that the very divide I had hoped to address with a civil conversation, has been broadened by the very possibility of it happening. This was not my intention. 2/4

I am disappointed by this but out of respect for the community, the show will not air. That said, in the spirit of mending the gap among Star Wars fans, I ask you to donate to a charity that @Drunk3P0 and I both support 3/4

Pls consider making a donation to https://t.co/b0CdMgOu9e as a way to show that, even though the divide among #StarWars fans is real, the connection among human beings is strong. Thanks, and May the Force Be With Us!
4/4 pic.twitter.com/f5bGcpNInN

I will always denounce violence, threats, prejudice & name calling – no matter where it comes from. This is why I ONLY identify with ONE fan group: #IAmAStarWarsFan. I have said it 100x, & even made a t-shirt out of it! If that’s you, continue to follow me and ♥️ Star Wars. 2/2

Drunk3P0 also responded to the mounting wave of hate being directed towards himself and Fletzer, noting that “there a lot of horrible things said about me and to Pete.” He also announced that he would be taking a break from his Twitter account:

I will explain all this soon. Please respect Pete for opening up his channel in trying to understand the difference of the fandom. https://t.co/jq4j5o4ZAg

There were a lot of horrible things said about me and to Pete for having me on his Podcast. I respect Pete for opening up communications for us to talk about our differences. Again I will address this soon.

Hey everyone, I’ll be off twitter for a little bit. You can catch me on my channel and sports wars. The resent hate on me has reached people close to me. I’m just gonna focus on making my videos and laughing at it all. I’m fine! But when things start to involve others then I need

to step back. Just kinda watch the situation and protect the people I love. For the record this has nothing to do the Geeks and Gamers or my friendship with Jeremy. Totally unrelated. Much love!!

Since shelving the respective podcast episode and apologizing to those who took offense, Fletzer has found that those same parties were attempting to review bomb the Around the Galaxy podcast on iTunes:

So, the kerfuffle from earlier this week led to some angry people heading to iTunes & giving 1 star ratings to AtG. If you are a fan, (#ThankYou!), and if you haven't already, it would help us if you click over and tap the 5 star button. No pressure. Thx.https://t.co/CaSfYnJvSE pic.twitter.com/zr3xPgfBPJ