Richard Lewis, the prominent eSports journalist and recipient of the 2016 eSports Journalist of the Year award, recently revealed his past attempts at novel writing in an attempt to “neutralize the power” of a group of persons allegedly attempting to blackmail him with said writing.

On October 16th, Lewis hosted a livestream on his Twitch channel, RichardLewisReports to discuss a recent storm of rumors, threats, and vitriol being directed towards him on social media, with Twitter being specifically referenced.

At the top of his livestream, Lewis claims that he has been subject to “multiple instances” of blackmail, and later states that “a group of games journalists” were attempting to “put out something that was as damaging as possible” in order to hurt Lewis’ reputation and his chances at winning the 2019 eSports Journalist of the Year award, for which Lewis is a finalist [Timestamped at 2:45:32 in the video below]:

“I got tipped off by some people in the games journalist space that I know that, back in August, there had been a group of games journalist that were wanting to dig up dirt on me to basically f—k me over in time for the eSports awards. That they wanted to put out something that was as damaging as possible and that they had believed they’d found a very incredible smoking gun.”

In support of his claim that he is being actively blackmailed, Lewis shared a tweet from eSports pundit and Fanbyte author Victoria Rose, who threatened to “share your old WordPress” after Rose took issue with Lewis “literally streaming himself namesearching his username on twitter for all his followers to see” and implied that Lewis’ namesearching alluded to “something else really awful waiting to happen.”

someone let me know that The Dude from yesterday is literally streaming himself namesearching his username on twitter for all his followers to see. pic.twitter.com/OnPWDbjEfx

I’m not joking when I ask – can someone he doesn’t hate check on this man? did something happen? this seems like something else really awful waiting to happen.

is this, like, reportable to twitch? I’m pretty sure provoking harassment is at least worth, like, checking in with twitch about.

hi rich, you know where to find me

anyway, get off my feed or we’ll share your old WordPress.

According to Lewis, the ‘smoking gun’ found by his detractors was an “old [Wordpress] blog from…2011? 2010?” titled TooManyDaysLikeThese, discovered after “people had trawled my Facebook and my twitter and found links to this blog.”

Lewis explained that “in a past life, I was basically a writer” and that the blog was initially intended to “put segments of this novel that I was writing out into the public domain to share with friends” before pivoting to general news reporting:

“What could be so bad, right? So, as some of you might know, in a past life, I was basically a writer. I wrote for a number of websites that were not eSports related. You know, it was basically stuff outside the realm. One was Sabotage Times. Currently that website’s down or I’d show you some of the work I would do over there. But basically, I wanted to be a novelist, and I wanted to write in the style of writers that I admired. It’s probably a bit cringeworthy looking back on it, but I wanted to be like Bukowski, I was heavily influenced by a book called Women, which is a great read, and Trainspotting was another thing, I used to really like Irvine Welsh quite a bit.

So, basically, what I did, was I had a blog where I would put segments of this novel that I was writing out into the public domain to share with friends because, you know, I didn’t have a public profile back then. I was a nobody.

In August, people had trawled my Facebook and my Twitter and found links to this blog, and they started archiving all of the files. As much as that was on there. Now, later, the blog kind of pivoted towards being reporting. The last thing that’s on it are the Burmingham Riots and coverage I did from that, but in there as well there’s extracts from a novel I was working on which was called The Romantic.”

Rather than keep the contents of his novel hidden, Lewis then proceeds to openly discuss the contents of the novel, as he claims that “these people were going to publish this anyway” and that he’s “not interested in that bullshit.”

“I always believe that, when people are blackmailing you and doing it so brazenly, that you have to neutralize the power. You can’t let people blackmail you for things, especially things, that you do not have to be ashamed of.

The reality is that these people were going to publish this anyway, but they’ve been trying to hold it over my head to f—king silence me. So I’m not interested in that bullshit. So I’m just going to show you.”

On The Romantic, Lewis explained that the novel “was about a chauvinistic, bitter drunk who worked in a call center and was miserable and the only way that he could feel sort of a connection to real life anymore was basically by seducing women, but doing it with really horrible, cynical means” and was his attempt “to combine two things, like trying to write a modern Bukowski’s Women, but also trying to combine it with my time in call centers,” while also noting that he now considers the general premise to be “pretty cringe.”

“The Romantic was about a chauvinistic, bitter drunk who worked in a call center and was miserable and the only way that he could feel sort of a connection to real life anymore was basically by seducing women, but doing it with really horrible, cynical means. And it was an ironic title, because obviously there’s nothing romantic about that. So, looking back, it’s probably pretty cringe, but it was also heavily based on, I worked in a lot of call centers. If you go watch the interview with Count Dankula, one of the things we talked about a lot was times in call centers and how shit they were. So I was like, basically trying to combine two things, like trying to write a modern Bukowski’s Women, but also trying to combine it with my time in call centers.

“The main character was a guy called Graham Godwin, well one of the main characters, and Graham Godwin, that was an amalgamation of two managers I’d had in my time at call centers that were like, chauvinistic people. And basically, how he gets by his time in the call center is he imagines himself as David Attenborough, so he does things like [mimicking Attenborough’s voice] “Here we have the female manager, wearing the shoulder pads and coming in to the, oh look, she’s about to couple with the weak, alcoholic, failed middle-tier manager” and that was how he got through the working days, right? So it was basically the idea that you have to reduce people around you to an animal state to cope.”

To back up his assertion that these writings were an exercise in creative writing, Lewis shared screenshots of e-mails from 2008, 2009, and 2011 sent to two ex-girlfriends and Lewis’ personal friend and published author G.J. Woods.

These e-mails show attachments bearing the same names as articles published on Lewis’ blog but referred to in one e-mail as “a jumble of chapters from novels, short stories, and poems.” 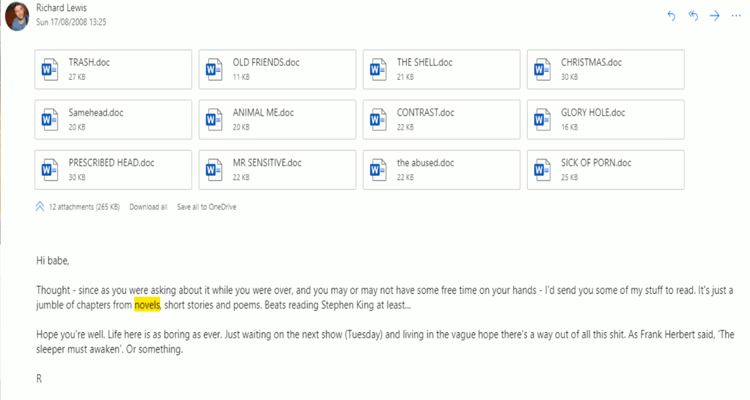 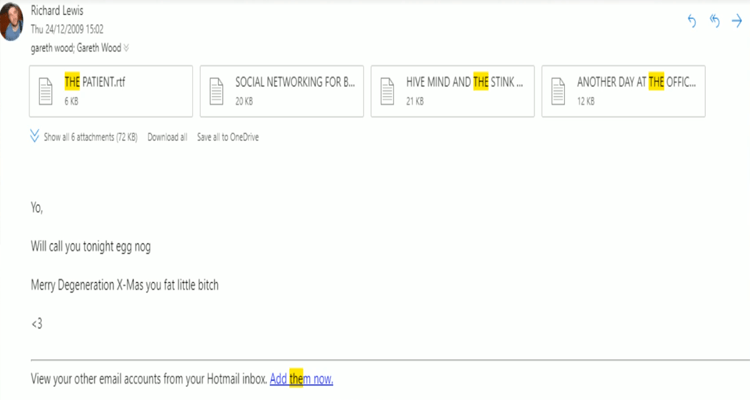 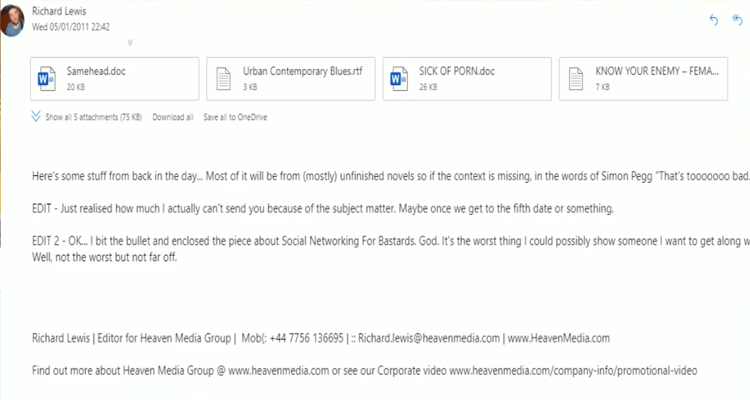 Lewis then states that two blog entries in particular, Know Your Enemy – Female Management and Social Networking for Bastards, were routinely cited as the metaphorical “headshot” to his career due to the supposed misogynistc rhetoric contained in the entries.

Though, as Lewis explains, these two entries were excerpts from his novel and were written from “Graham Godwin’s mind. It’s not my mind.”

“You can see here, that’s August 2019. Look at the sudden flurry activity of people saving it. They saved it four times, and they actually didn’t even do it correctly. They’ll have to rely on the 2011 links to get anything incriminating. But they though this blog would be the headshot, and it would end me, and it would prove all the negative things they say about me. Because, it’s got this chapter, about female managers in the workplace.

Social Networking for Bastards is outrageous. It’s about how back in the day, on Facebook, if somebody broke up with their partner, you coud, like, it would say […] “Hannah has broke up with John” and it would have a little broken heart separated. […] So what I did, was I theorized, like, what would a guy like Graham Godwin in the office do if he could get out there and have sex, if he could be the first person who got there on Facebook when they broke up. So again, this is a pretty misogynistic view of sexual coupling, and there’s just gross bits in it.”

However, Lewis also recognizes that the shifting nature of his blog’s content could have contributed to the confusion felt by many readers:

“This is where I think the confusion comes in. Because I did do some TV reviews when I first started the blog, complaining about things like the metro, commuting, the ten o’clock show. But when I ran out of material, cuz this blog started in 2011, I started posting my own work from 2008, 2009, cuz I was sharing this blog with friends.”

Ultimately, Lewis reiterated his stance that he will “not be blackmailed by journalists for fiction I wrote nine years ago,” highlighting the absurdity of the writing’s content, the inconsistency between the writing and Lewis’ known personality, and calling those who attempted to use these writings as an attempt to influence the eSports Awards “pathetic.”

“Hopefully people understand, I’m not going to be blackmailed by journalists for fiction I wrote nine years ago. It’s not gonna work. It’s never gonna be me. You wanna try and cancel me based on these things? Have at it. At the end of the day, they are so f—king outlandish as to clearly be fiction, I’ve got e-mails from the time proving they are fiction, I can put you in touch with fellow writers, publishers that reviewed and assessed this fiction, I have the original manuscript over there, I can release original unedited copies of the work, I can release the novel as it is to this day, which is, you know, a good ten-thousand, maybe twenty-thousand words, so you can even see the reason it was abandoned, because it was a conceptual nightmare.

In the same way that Beto O’Rourke, when he was a f—king  teenager, wrote a fantasy about killing, murdering people and nobody would ever believe for a second that it’s something he really wants to do. Like, Jesus, do we really believe that this is me? My voice? My beliefs? Does it sound like me, does it look like me, is there any evidence that I would behave this way?

I think it’s ridiculous, and I just want to say how pathetic it is that you guys got this in August and would deliberately wait and deliberately sitting on it to release just before the eSports Awards. It’s just not going to f—king playout.”