A Virginia judge has ruled that Johnny Depp must produce his “relevant medical records” and materials related to his alleged substance abuse to the legal defense team of his ex-wife, Aquaman-star Amber Heard, in the ongoing defamation lawsuit filed by Depp against Heard.

According to a legal filing obtained by Deadline, on October 18th a judge in Fairfax County, Virginia, granted a motion to compel filed by Heard which requested that Depp “produce all non-privileged, responsive documents” requested by the defense team relating to Depp’s alcohol and drug use and “execute a HIPAA waiver to allow Defendant to subpoena Plaintiff’s relevant medical records.”

The judge also ruled that Depp must comply with this order by November 15th, 2019. 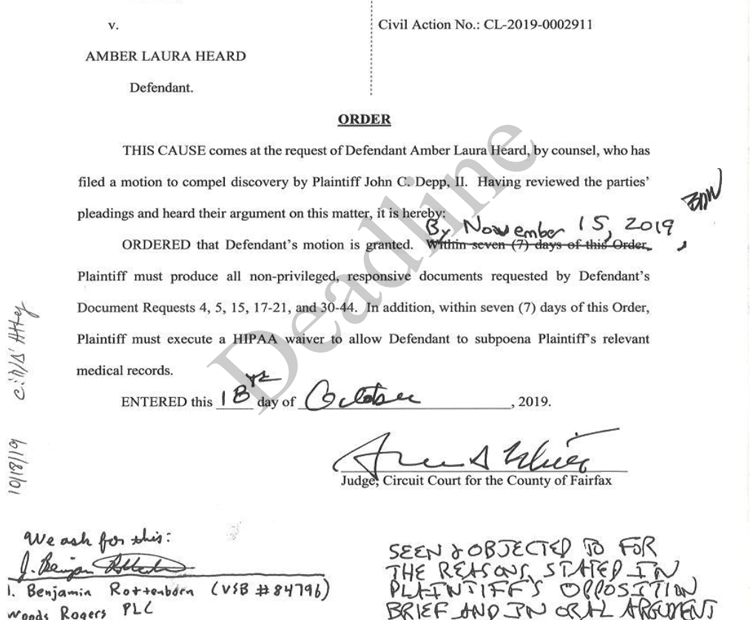 The text of the order as provided by Deadline.

In response to this order, Adam Waldman, Depp’s primary attorney, told Deadline that “Heard no longer feigns any effort to prove her abuse hoax” and notes that the “only person in this case who beat a woman is the self-appointed #MeToo spokesperson Amber Heard.”

“Amber Heard no longer feigns any effort to prove her abuse hoax. If she wanted to do that, she and her co-conspirators would stop running from their depositions. Instead, Ms. Heard’s #TimesUp legal team have moved on to the tactics their former client Harvey Weinstein perfected – smear the victim with PR innuendo. For the avoidance of doubt, the only person in this case who beat a woman is the self-appointed #MeToo spokesperson Amber Heard, and she was arrested and incarcerated for it. And she savagely beat others, as will be shown at trial.”

While the head of Heard’s legal team, Time’s Up Legal Defense Fund co-founder Roberta Kaplan, as Waldman asserts, did perform legal work for notorious Hollywood sexual assaulter Harvey Weinstein in the past, she was not involved with any of the recent legal matters related to his sexual misconduct.

Kaplan took a different response to the ruling, allegedly speaking with “no small amount of snark” as she declared that “Mr. Depp wants to hide evidence” and that “Mr. Depp started this fight. Ms. Heard intends to finish it.”

“We are very pleased that the Court granted our motion to compel in full.  Mr. Depp’s position on discovery in this case has been nonsensical, as if he were the one being sued. But it is Mr. Depp who started this lawsuit on the theory that Ms. Heard somehow made up all the abuse that forced her to obtain a restraining order against Mr. Depp back in 2016.

Now that the facts in his own lawsuit are making him uncomfortable, Mr. Depp wants to hide evidence commonly understood to be connected to incidents of domestic violence: his decades-long abuse of drugs and alcohol, his past history of violence, and medical records showing among other things the laundry list of prescription medications he takes daily and injuries from his drug-induced rages,” the NYC-based Kaplan continued thoroughly. “But that is not how litigation works. Mr. Depp started this fight. Ms. Heard intends to finish it by proving, if necessary, the truth of what really happened.”

The trial date for Depp’s defamation lawsuit is currently set for February 3rd, 2020.