A new rumor indicates Blizzard will only allow submitted questions to be asked during their World of Warcraft Q&A panel at BlizzCon 2019.

The rumor stems from a screenshot of Blizzard’s Question Submission for WoW Q&A Panel that was posted to the WoW subreddit with the headline, “No open Q&A sessions at BlizzCon this year. RIP, Red Shirt Guy.” 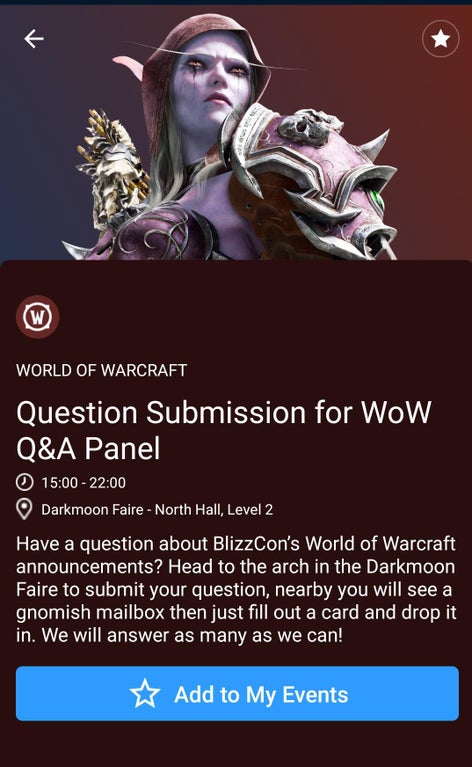 The photo would quickly make its way to Twitter where World of Warcraft Vanilla Team Lead and Diablo 2 producer Mark Kern took the photo at face value.

Rotfl. You can’t even ask questions in person at Blizzcon. https://t.co/YlwYYgBnt8

Kern would elaborate on why he believes Blizzard would not take any live questions at BlizzCon 2019 pointing out that they cancelled their Nintendo Switch Overwatch event as well as their 15th Anniversary WoW Celebration in Taiwan.

He added, “This is what happens when you trash your brand SO BADLY, that even your loyal fans can’t be trusted.”

Blizzcon has no choice but to not take live questions.

Blizzard had no choice but to cancel their Nintendo Overwatch event, and Taiwan’s 15th anniversary WoW celebration.

This is what happens when you trash your brand SO BADLY, that even your loyal fans can’t be trusted.

YouTuber The Quartering would add his own thoughts on the rumor. He points out that there are no Q&A sessions on the BlizzCon schedule aside from the WoW Q&A session.

However, a former Blizzard employee and community manager CM_Ythisens would respond to the thread and detail the World of Warcraft Q&A submission has been in place for years.

“This is how the Warcraft Q&A has been done for years so this isn’t anything new. WoW hasn’t had an “open” Q&A in years. It’s curated for time and content mainly otherwise it’d be an unorganized mess that was all over the place.

Also FYI red shirt guy questions are considered every year if he submits one. He’s a cherished staple of the Q&A, unfortunately his question can’t make it every year. I can’t remember the recent reasons and questions he couldn’t ask but it wasn’t anything bad.

Source: I helped with it every year I was there.”

“If you scored a ticket to BlizzCon 2016 and would like to submit your question in-person, head up to the Darkmoon Faire community area on Level 3 on Friday, November 4 and look for the Warcraft mailbox. We’ll have everything you’ll need to write down your question for the devs, and if it’s selected, you’ll be given the opportunity to ask it live during the Q&A. Please note that in-person questions for the Q&A must be placed into the Warcraft mailbox before the end of the first day of BlizzCon.”

Rumor Not Without Merit

The rumor is not without merit. Following the announcement of the mobile game Diablo: Immortal, which is being produced by Chinese game developer NetEase, Blizzard was openly mocked in a live Q&A when one fan asked, “Hey, just was wondering is this an out of season April Fool’s joke?”

Following the announcement of the mobile game at the panel and the subsequent release of a trailer for the game, Blizzard began deleting negative comments about the game on their YouTube channel.

The backlash to the game prompted a response from Blizzard co-founder Allen Adham and production director Dan Elggren.

“The way I’ve been kind of looking at the mixed comments is what those folks are really saying is they desperately, passionately want the next big thing. So I actually think that those two items are being conflated. So I don’t think that the mixed comments are necessarily anything other than when a really passionate audience that desperately wants to see what they hope to see one day … It’s pretty clear to us that there is a huge audience around the world that is gonna love this title. So hopefully we’ll get there.”

Not only was Blizzard embarrassed on the world stage, but following their ban of Hearthstone Grandmaster’s player Blitzchung, the company has made a number of decisions that indicate they are trying to avoid in-person interactions with fans.

Blizzard announced the cancellation of the Taiwan event on Facebook:

“We would like to inform you that we have extended the 15th anniversary celebration party of the world of Warcraft, which was scheduled for October 18th (Fri) to 20th (Fri). We know that many players are looking forward to this event as much as we do. We are considering different options and will announce new event dates in the future.”

Not only is Blizzard cancelling previously planned events, but there are also planned protests at BlizzCon. Dayton Young who is organizing protestors spoke to Gamespot detailing that his plans to protest at BlizzCon remain unaltered despite Blizzard lessening their ban against Blitzchung and the two casters.

“We understand that game publishers and developers have a responsibility to moderate the content that appears on their platforms to ensure that gamers are safe from harassment, threats of violence, and other dangerous behavior. But silencing gamers who speak up about issues that affect their freedom makes us all less safe from oppression and institutional abuse.”

Young made it clear that protest plans were “moving forward full-steam ahead.”

What do you make of this rumor? Do you think Blizzard will only allow pre-selected submitted questions at BlizzCon?