Ant-Man actor Clifford Harris or T.I as he’s better known took to Instagram to call for the death of Donald Trump, Mike Pompeo, and other American leaders.

In the video, seen below, subtitles capture what Khamenei says, “(The U.S. authorities) complain and ask why do Iranians say, ‘Death to America.’ Let me make something clear for U.S. leaders… ‘Death to America’ means death to Trump, John Bolton, and Mike Pompeo.”

Related: Avengers: Endgame Actor Don Cheadle to Donald Trump: “You’re The Most Frightening Human Being on the Planet Right Now”

Khamenei continues, “It means death to American rulers. We have no problems with the American people. ‘Death to America’ is about the rules of America. It’s about a group of people who are currently in charge.”

T.I. would emphatically agree with Khamenei writing on Instagram, “Yep…YUmmm-Hmmm…Exactly What HE SAID!!”

He added, “Ain’t no Iranian never called me no N*****,infested our communities wit dope & then locked us up for it, allowed the police to pull us over & gun us down with no accountability, or enslaved us and tried to act like da shit ain’t happen.”

He continued, “So… as I pray for our soldier…I’m also gon be praying for theirs. THIS AINT OUR WAR CHAMP!!”

In a later post, the actor wondered how the United States, which claims to take out evil people, is able to strike at them but is unable to rid the country of the Ku Klux Klan. 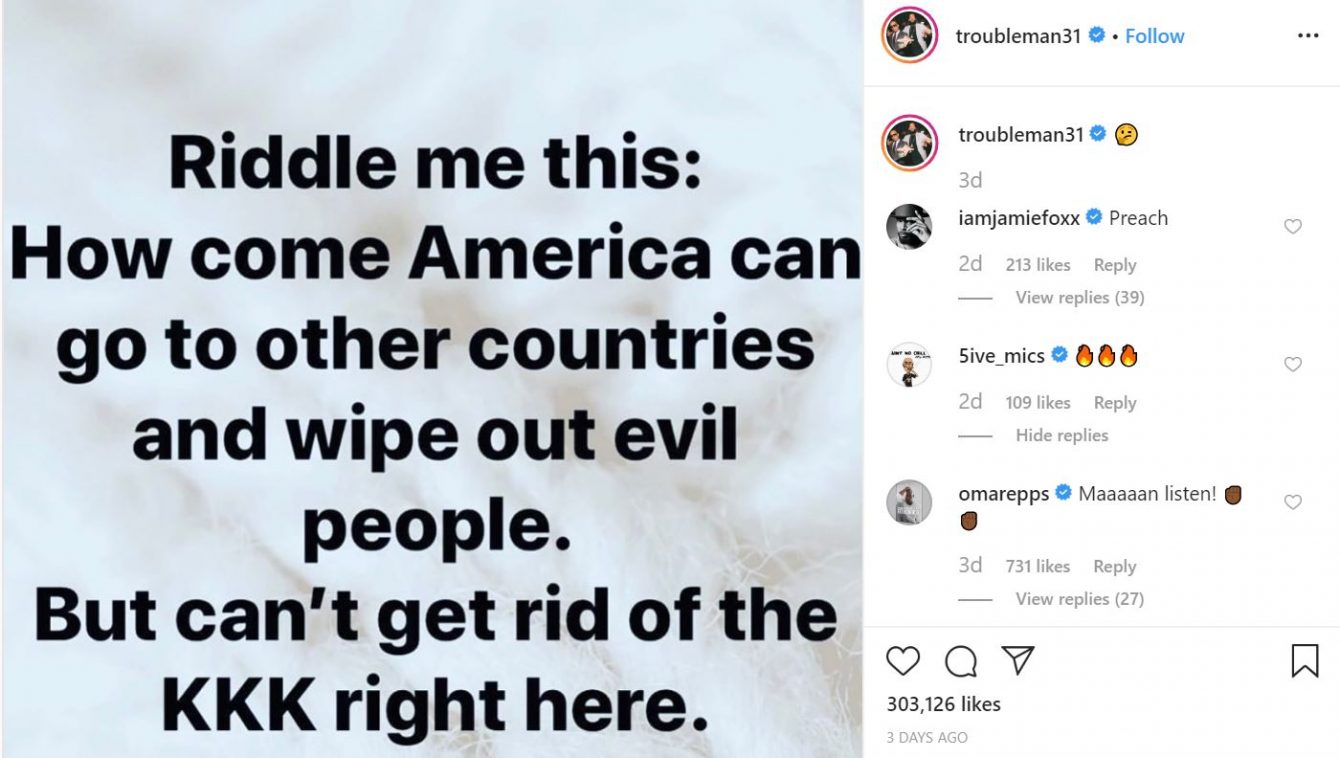 The actor would then post an image that reads, “I Am Not A Democrat I Am Not A Republican I Am Black.”

He would caption the photo writing, “I ONLY care about what affects the people I CARE ABOUT … Straight like THAT!!!! #USorElse”

The actor has found himself in the center of controversy recently. Back in November, he appeared on the Ladies Like Us podcast and was asked if he had had the sex talk with his 18 year old daughter Deyjah.

As reported by E! News, T.I. responded, “Have I? We go…Deyjah’s 18, just graduated high school, now she’s attending her first year of college, figuring it out for herself.”

He added, “And, yes, not only have we had the conversation…we have yearly trips to the gynecologist to check her hymen.”

What do you think of T.I.’s comments? Let me know in the comments below!