Shortly after completing his Final Fantasy VIII speed run for the Games Done Quick charity video game speed-running event, speedrunner Luzbelheim has been issued an 18-month submission ban due to his anti-feminist views and support of Spain’s Vox political party.

Viewers took issue with Luzbelheim before he began his run, particularly with the anti-feminist views espoused on his personal Twitter account, such as featuring the phrase “I hate feminazism” in his bio, retweeting anti-feminist memes, and and a tweet voicing his support of the economic policy of the far-right Vox political party: 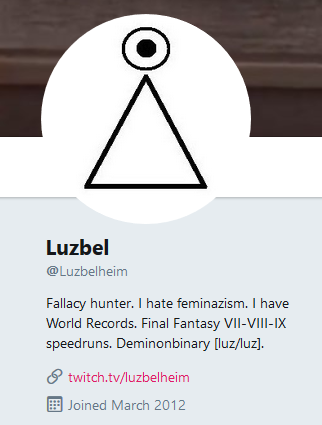 One of the first outlets to cover this controversy, The Daily Dot, declared that Luzbelheim held “bigoted views” and criticized the charity event by declaring that they found it “baffling that the vetting process it has in place allowed Luzbelheim to make it to stream.”

Another outlet quick to report on the story, The Gamer, labeled him a “far-right ultra-nationalist”  and took issue with the fact that “while Luzbelheim only praised the economic policy of Spain’s Vox party, he did so without mention one way or another of their nationalist ideology, which for many defines the party and overshadows any of their other platforms.”

In response to another user on Twitter, Luzbelheim informed them that he was told immediately after he had finished his run had he had been banned from speed running for 18 months:

On the /r/speedrun subreddit, user /u/GhostKingG1 clarified that “its [sp] a submission ban” and that “they didn’t take Luz’s badge or anything.”

In response to a bombardment of questions from numerous users, Luzbelheim clarified his views on Twitter, stating that he was not anti-feminism or anti-woman, that he had a nuanced opinion on the entirety of the Vox party, and chastised western critics for their lack of understanding of Spanish politics:

Okay.
You hate the term because some people use it to refer normal feminism.
I tell you that I don’t hate feminism and the term is used to call the pseudofeminists I mentioned tweets ago.
In a normal situation the debate would end there.

Demanding to choose people for a job/charge by their sex instead of by their knowledge is a form of feminazism.
Not helping a gay couple economically if 1 member hits the other because one of them is not female is another form of feminazism.
The list is big (in Spain at least)

I agree in some points with them and I strongly disagree in other points.
Never voted in my life.
That doesn’t change the fact that economically in my opinion it has the best program (lower taxes, help the average company and freelancers, reduce bureaucracy)
Simple as that.

Imagine not being Spaniard, not living in Spain, reading two articles of the “most objective” media (fro outside Spain too) and thinking that you are legitimized to opine about the subject.
Just imagine being a bloody ignorant about economics in Spain.
Just imagine FOLK.

He also addressed those on the opposite end of the spectrum who supported him because he was “mocking feminists/pronouns,” distancing himself from these users by telling them to “fokoff as well”:

The people that are defending me thinking that I am in their side because they believe I am mocking feminists/pronouns can fokoff as well.
👍

According to Luzbelheim, he has recently given an interview to “a Kotaku journalist,” and explained to those who warned him of Kotaku’s sometimes questionable coverage of issues pertaining to politics and social views, that he was optimistic about the impending coverage because “it is the only media that actually tried to check my point of view.”

Btw I did a small interview with a Kotaku journalist.
The guy was really cool so I think it’s going to be okay.
😊👍

I didn’t expect these answers (I am pretty ignorant with the website).
The truth is that it is the only media that actually tried to check my point of view, and I appreciate that.
The journalist gave me a good feeling so let’s hope they are objective 👍

As of writing, the Games Done Quick organization has yet to issue an official statement regarding the ban.