The controversies, if you can call them that, surrounding the 2020 Oscar nominations continue. This time GQ writer Sophia Benoit took issue with the World War I film, 1917.

The film 1917 is a World War I drama that follows two British soldiers who are tasked with delivering a message across enemy lines in an attempt to stop an attack that could kill hundreds of soldiers.

Related: 1917 Review: Marching Through a Labyrinth of Death

You can catch the trailer below:

Benoit specifically took issue with the fact that the film was even made and questioned why this type of war film is being made when she wants movies about “not-white men’s lives.”

Off the bat, it’s an ironic and overly ridiculous question if you just look at the number of times Little Women has been adapted to both film and TV. 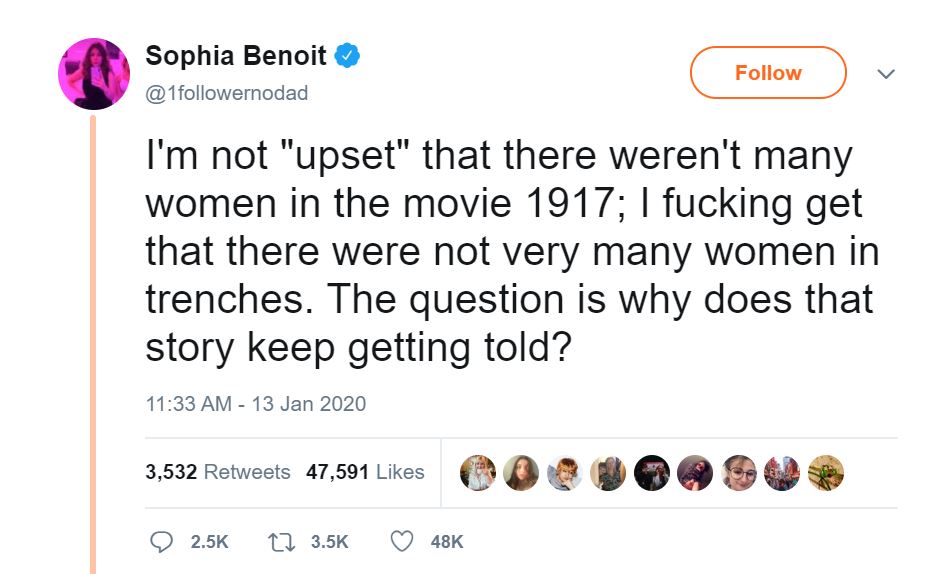 She added, “If you think there aren’t/werent’ fascinating women’s-only or female/femme-dominated spaces in this world with their own stories to be told, you’re delusional.”

She then concluded saying she wasn’t “upset or mad” and insinuated she hadn’t even seen the film.

Benoit wrote, “Folks, I’m not even ‘upset’ or ‘made’ or w/e that 1917 got made. I’m sure it’s great! That’s outside the question at hand which is where are the stories about not-white-men’s lives & why are they still not getting made?”

She added, “I know the answers; I want more people to ask the questions.”

Benoit would not be the only one to vent their frustration at the Oscar Nominations for the supposed lack of females.

In one such case, a piece from the New York Times stated: “Academy of Motion Picture Arts and Sciences largely maintained its traditional point of view, handing out the most nominations to four very male, very white movies.”

Related: Star Trek: Discovery Star Michelle Yeoh: Movies Should Not Be Nominated “For the Gender or For the Diversity”

ScreenRant’s Kayleigh Donaldson wrote on Twitter, “Since the Oscars suck with representation of female film-makers, here’s a list of movies coming out in 2020 directed by women!”

Since the Oscars suck with representation of female film-makers, here’s a list of movies coming out in 2020 directed by women! pic.twitter.com/DjlG0iZNhe

Diep Tran of the New York Times was also highly critical of what she claims is a non-diverse pool of contenders for the Oscars. She even compared the list of nominations to the current Democratic primary.

She wrote, “What started out as a diverse pool of candidates is now just another fight between a bunch of white people.”

What started out as a diverse pool of candidates is now just another fight between a bunch of white people.

I could be talking about the Democratic race or the Oscars. It’s universal!

Even the UN’s entity for gender equality and women’s empowerment chimed in to criticize the fact a woman wasn’t nominated for Best Director.

“It’s an honour just to be nominated,” no woman director will say at the #Oscars — once again in 2020.

Only 5 women have ever been nominated for best director in the award’s history. pic.twitter.com/vTQTewcQA3

Progressive outlet NowThis created a short video about the 2020 Oscar nominations calling them “so white and so male.” Interestingly enough the video is not with some hypocrisy as it recognizes the first Korean movie to be nominated for Best Picture.

However, they lamented that none of the actors from the film got nominations in the acting categories.

The 2020 Oscar nominations are so white and so male pic.twitter.com/rfvZ9YsDxq

This isn’t the first time the Oscars have come under fire from those who demand artificial representation. Back in 2015, the hashtag #OscarsSoWhite was created by activist April Reign to criticize the lack of minority representation in the lead and supporting actors categories.

When people ask #OscarsSoWhite creator April Reign if #OscarsSoWhite is still an issue, “My answer is absolutely yes. Until we are no longer having these conversations about firsts in 2019.” #Oscars pic.twitter.com/EXb8IesIpv

The 2020 Oscars will air on February 9th on ABC and they will not be hosted by Kevin Hart.