Fans unsatisfied with My Hero Academia mangaka Kohei Horikoshi’s initial apology for the name of a villain which some perceived as a reference to Japanese war crimes during World War II have taken to demanding further clarification and destroying their manga collections in protest. The ensuing outrage led to Horikoshi issuing a more detailed, formal apology to readers.

Despite informing readers that a perceived reference to Unit 731 in the name of villain Maruta Shiga was unintentional and stating that he intended to change the character’s name, outraged fans felt that the Hirokoshi’s initial response was lacking. These fans spawned the hashtag ‘#Hero_do_not_harm_innocent_people’ to air their grievances and continued to demand a ‘proper’ apology from Hirokoshi:

#私達は謝りだけを欲しい #Hero_do_not_harm_innocent_people
I am so disappointed and angry with what @horikoshiko done with his work. We need an properly explain and apology! How dare you play jocking with our painful history! pic.twitter.com/tz8gBC8JsZ

#Hero_do_not_harm_innocent_people If you try to play a joke with history no matter on which purpose, you will deserve punishments by us who REALLY WANT PEACE AND LOVE. Whatever you have been advocating in your stories…They are all FAKE!

#私達は謝りだけが欲しい#Hero_do_not_harm_innocent_people you have to respect my pain, but I can expose your scars, so selfish and rude, its ridiculous that they are still preaching peace and portraying heroes, are they actually satirizing heroes? pic.twitter.com/ywn1WMTaTz

Some fans even made posts showing that the offense they took and emotions they felt had driven them to literally trash their collections of My Hero Academia manga: 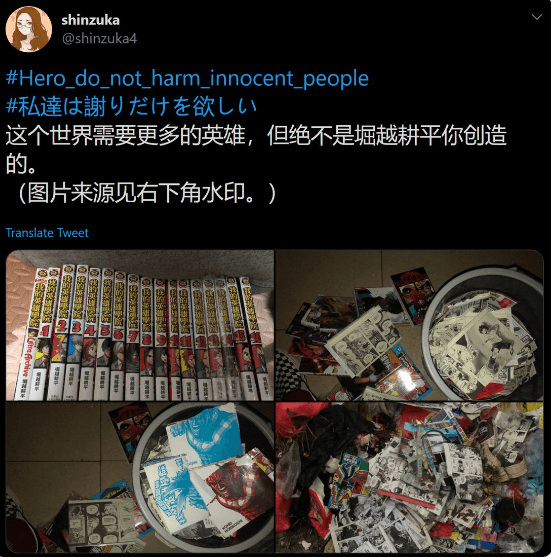 #私達は謝りだけが欲しい #Hero_do_not_harm_innocent_people
It’s ridiculous because of you.
English translated version is so expensive in UK, but I do not want to keep it anymore. pic.twitter.com/HOiuJ0e669

The mounting backlash inevitably led to both Horikoshi and Weekly Shonen Jump publisher Shueisha apologizing once again, via statements published by Weekly Shonen Jump’s Twitter account in both Japanese and English, and explaining that Maruta Shiga’s name was chosen to make the character seem closer to previous League of Villains leader Shigaraki and to convey a sense of his “round and plump” appearance.

Formal apology for the name used in My Hero Academia in Weekly Shonen Jump Issue 10, 2020 pic.twitter.com/W9H1sTZJJe

The apology from Shueisha reads:

“Formal apology for the name used in My Hero Academia in Weekly Shonen Jump Issue 10, 2020

Regarding the character “Maruta Shiga” – which appeared in chapter 259 of My Hero Academia (Weekly Shonen Jump Issue 10, February 3rd, 2020), a large number of readers from China and other countries have pointed out that the name evokes memories of the tragic past. “Shiga” is part of another character’s name, and Maruta (kanji: round + fat) reflects the appearance of the character in question. Any apparent reference to historical events was wholly unintentional. Despite this, the character’s role as the doctor for the evil organization, combined with his name, ended up being hurtful to overseas readers in China and elsewhere. The editorial department ought to have taken the time beforehand to put more thought into this. We did not, and for that, we are profoundly sorry.

With all sincerity, we realize the gravity of this issue and will change the name both in the physical volume release and, as soon as possible, in the digital version of the chapter.

So that this kind of issue does not occur again going forward, we intend to devote our energies towards deepening our understanding of a variety of historical and cultural matters. By being more intimately aware of the thoughts and feelings of those from all walks to life, we will deliver manga that can be loved by all.

Related: My Hero Academia Readers Falsely Claim All Might is Bisexual, Circulate Proven Mistranslation as Evidence

Horikoshi issued his own separate statement:

“By using the name “Maruta Shiga” in chapter 259 of My Hero Academia, I deeply offended a great number of readers. I am truly sorry about this. The character-with deep reverence and wanting to feel closer to the League of Villain’s former boss, All For One – decided to take part of All For One’s last name (Shigaraki) and make it his own (Shiga). I gave him the first name “Maruta” because he’s round and plump. Any other meaning is coincidental, and I had absolutely no intention of hurting so many readers, which I now know that I did. I apologize from the bottom of my heart.

Going forward, I will do my utmost to make sure that this sort of thing never happens again.