In the declaration, obtained by The Blast, Ryder states that she is “aware of the violence allegations that have been made publicly for the last few years by Johnny Depp’s ex-wife Amber Heard” but refutes these claims, stating that “The idea that he is an incredibly violent person is the farthest thing from the Johnny I knew and loved.”

“I knew Johnny very well years ago. We were together as a couple for four years, and I counted him as my best friend, and as close to me as family. I count our relationship as one of the more significant relationships of my life. I understand that it is very important that I speak from my own experience”

“I obviously was not there during his marriage to Amber, but, from my experience, which was so wildly different, I was absolutely shocked, confused and upset when I heard the accusations against him. The idea that he is an incredibly violent person is the farthest thing from the Johnny I knew and loved. I cannot wrap my head around these accusations.” 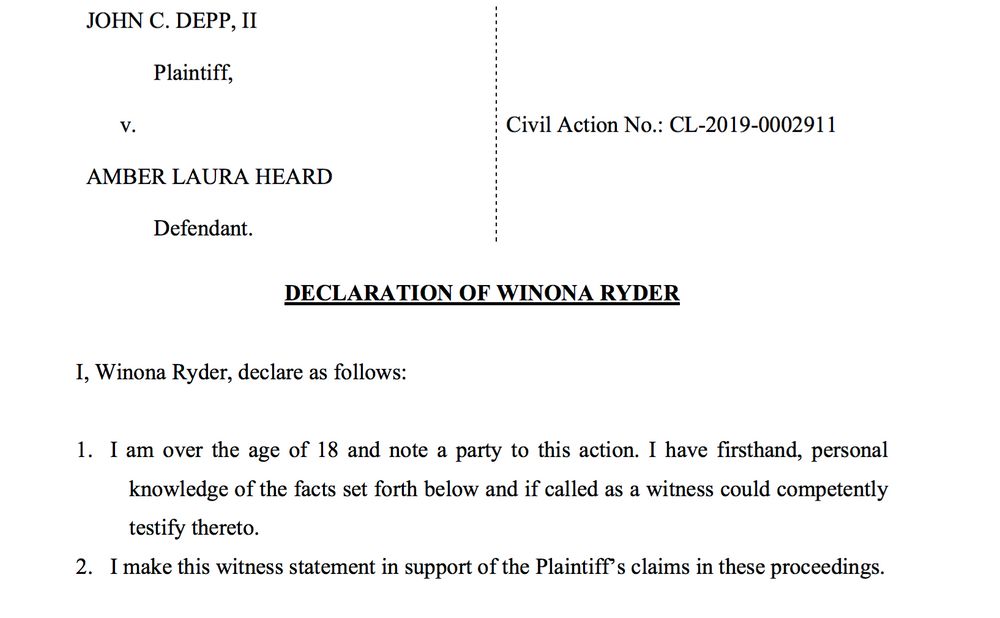 Speaking of their romantic time together, Ryder recalled that Depp had “never been violent or abusive towards anybody” and she had personally “felt so very, very safe with him.”

She also stated that while she was not calling “anyone a liar,” she found it “impossible to believe that such horrific allegations are true.”

“I do not want to call anyone a liar but from my experience of Johnny, it is impossible to believe that such horrific allegations are true. I find it extremely upsetting knowing him as I do.”

According to the filing, Ryder is also ready and willing to be called as a witness for Depp’s legal team in his ongoing legal war with Heard.

This isn’t the first time Ryder has spoken about the abuse allegations against Johnny Depp. Back in 2016, she told Time:

“Look, I mean, obviously I can only speak from my own experience. It’s very tricky because if it were any other type of scandal, like cheating, you could be like, ‘None of my business. No comment. Not appropriate for me.’ But I think because what is being said is so horrific and such a global issue for millions of women, obviously, that I understand why people feel it is their business. I get it. And I get why you would ask.”

Ryder then detailed Depp had never been abusive to her at all.

“I can only speak from my own experience, which was wildly different than what is being said. I mean, he was never, never that way towards me. Never abusive at all towards me. I only know him as a really good, loving, caring guy who is very, very protective of the people that he loves. It’s hard because I feel like—that’s my experience. And it’s been a very long time.”

She then went on to say that the allegations are “difficult and upsetting” for her before adding that she had “never heard anything like that about him.”

“I don’t know how you feel about it, but it’s like anybody who says anything about it is a victim-blamer. I wasn’t there. I don’t know what happened. I’m not calling anyone a liar. I’m just saying, it’s difficult and upsetting for me to wrap my head around it. Look, it was a long time ago, but we were together for four years, and it was a big relationship for me. And we have a lot of mutual friends. I just never heard anything like that about him. But, again, I feel like even saying that, I’m going to get death threats or something. I’m not on social media, so maybe I will be spared.”

Ryder continued detailing that the allegations are “shocking” and that she had “never seen him be violent toward a person before.”

“But yes, it’s really hard. I don’t know what your love history is, but imagine someone you were in a relationship with was accused of this. I get that there are patterns of abuse. I get why you’re asking me. But it’s weird because imagine if someone you dated when you were—I was 17 when I met him—was accused of that. It’s just shocking. I have never seen him be violent toward a person before.”

She even described the idea of Johnny Depp being abusive as “unimaginable.”

“It’s just hard to picture. The only word I can come up with is unimaginable. You know with certain people you hear something and go, “I can see that.” But this isn’t that. So anyway this is the first time I’ve said anything so I don’t know. I can only offer my own experience. It’s such a serious, horrible thing to be accused of.”

“It’s almost as if your brother or someone you just never—so, you know, there’s a part of me that is thinking, ‘Is it even appropriate for me to say anything?’ But because of the seriousness of it, it’s been brought into a thing where it’s trickier for me to say, ‘None of my business.’ But that’s all I have to offer is my own experience, which was a very, very long time ago.”