Sakimi-chan, a popular pin-up artist whose works prominently feature popular video game and anime characters, found herself the target of a recent outrage mob as a wave of social media users recently took to criticizing her body of work due to their opposition to her personal art style.

The wave of criticism against Sakimi-chan began when a Twitter user, @Teachlko, drew attention to a tutorial on drawing bodies first published by Sakimi-Chan in July of 2019, expressing in a now-deleted Tweet her disgust that the bodies “are all the f***ing same.”

In the tutorial, which is available through her Patreon account, Sakimi-chan discusses “3 different female proportion style, normal, one that’s more curvy and one that’s a bit more exaggerated.”

Following @Techlko’s initial Tweet, Sakimi-chan was soon bombarded with criticism and harassment by like-minded art authoritarians, or ‘arthoritarians,’ with the harassment ranging from claims that she was a terrible artist because she did not ‘understand anatomy,’ to accusations of fatphobia based on a tutorial on drawing plus-sized bodies that did not conform to the critics’ very specific standards of representation, to outright calls for the continued bullying and harassment of Sakimi-chan:

I dont want to be rude i dont i really dont i believe her art skill is amazing but…. this is a prime example of how people dont know how draw fat people

As a larger woman this really sucks for a multitude of reasons. You refer to the typical skinny body as “normal” and then there’s barely any difference in the second and third pinup. Really disappointing you can’t broaden your horizons past skinny.

“Exaggeration pinup” “thicc edition” have you ever seen a fat person??

In the face of the wanton outrage, fans of Sakimi-chan and artistic freedom provided an outpouring of support to the artist, not only explaining to the mob that her art was intentionally and specifically stylized, but also speculating that many of the criticisms were based on a strong sense of envy.

Sakimichan gets a minimum of $24,000 a month because she has 8,000+ Patreons. If only that person would put as much effort into their soulless Tumblr art instead of using said effort to dig up a year old post and then pull the race card when people tell them to get lost. pic.twitter.com/BtSuBzxlAq

Can you guys read? She isn’t saying these are all the body types, there’s a “thicc edition” on the top left corner, these are just 3 variations of the curvy anime girls she draws. I’m not even a fan of sakimichan’s art at all but you guys hate on her for the stupidest reasons lol pic.twitter.com/0kcRddElYj

How dare a successful artist give good advice on their account?

How about I act like a prick to them so I can get attention and clout?

You don´t give a rat ass about the anatomy. The only reason why people like you is screeching at Sakimichan right now is because her work offends you and because she won´t start to paint obese people to protect your feelings. Fancy painting? The mean girl jealousy is evident. https://t.co/XEOcg8SJSY

Some people on here got their brains poisoned by hyper fetish art. This is coming from someone who enjoys that stuff.

There is a pretty obvious difference between these three, and the clown brigade here are just using this as another excuse to throw a tantrum over sakimichan. https://t.co/1zh0hXMtAB

For her part, Sakimi-chan did not respond to any of the accusations, instead continuing to post new pieces, with her most recent featuring Tseng from Final Fantasy 7 Remake.

As the discourse and pushback against her statement mounted, @Teachlko ultimately devolved into attempting to downplay the hostility of her accusation, dishonestly accusing Sakimi-chan’s fans of hurling pure vulgarities towards her, and deflecting criticism by bizarrely claiming that her opponents fervently wished to call her a racial slur: 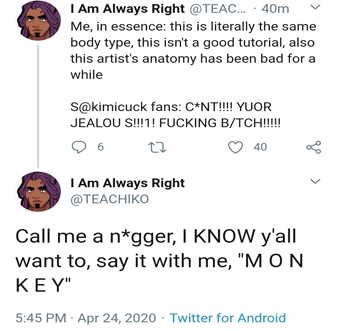