Sloane ‘Skipper’ Wolf, a social media manager for Nintendo America and a partnered Twitch streamer, recently praised the Shake Shack restaurant chain after it was alleged that one of their locations had intentionally poisoned three New York Police Department officers.

On the evening of June 15th, three members of the NYPD became sick while on patrol, and at the believed that they had been poisoned after drinking a shake from a Shake Shack restaurant. One officer reported that the shake smelled like bleach and had a bitter taste.

An investigation by the NYPD eventually found “that there was no criminality by Shake Shack’s employees.

NYPD Chief Rodney Harrison tweeted, “After a thorough investigation by the NYPD’s Manhattan South Investigators, it has been determined that there was no criminality by shake shack’s employees.”

After a thorough investigation by the NYPD’s Manhattan South investigators, it has been determined that there was no criminality by shake shack’s employees.

NBC New York reported that “The NYPD later said that the substance was a cleaning solution apparently accidentally left in the drink machine.”

However, Shake Shack tweeted that they had not heard that there was “any contaminant in the shakes.”

Coincidentally, at the time the events were unfolding in New York, former presidential candidate Andrew Yang sparked a casual and light-hearted Twitter debate after asking users for their thoughts on the opinion held by his two young sons that “Shake Shack is better than Five Guys.”

My boys think Shake Shack is better than Five Guys. Right or wrong? 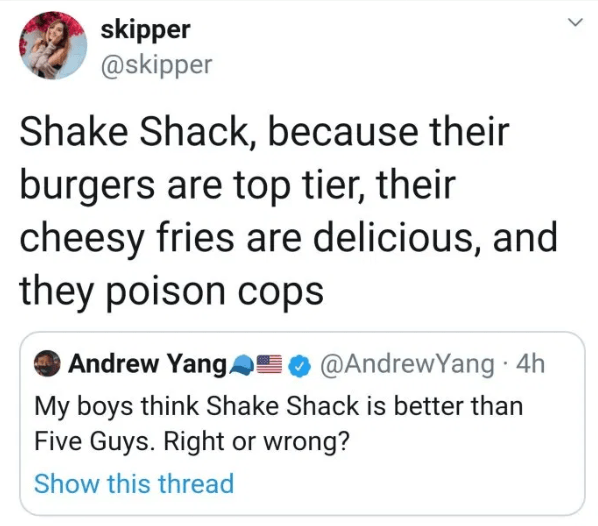 Wolf’s response was brought to widespread attention after it was retweeted by former US Representative and current Fox News contributor Jason Chaffetz, who called Wolf “an absolutely disgusting human full of hate, division, and evil” due to her “advocating for and supporting the attempted murder of anyone.”

You are an absolutely disgusting human full of hate, division, and evil. Advocating for and supporting the attempted murder of anyone is wrong, vile, and again evil. Don’t kid yourself thinking you are for diversity and inclusion. You spew hate and working to divide America. https://t.co/Izmpmbykkg

Noting that Wolf soon after locked her Twitter account and removed mention of Nintendo from her bio, Chaffetz proceeded to tag the official Twitter account for Nintendo of America and stated that the company “might want to look into what @skipper tweets about, the poisoning of police.”

Moments after my tweet her account suddenly changed to private and she changed her bio. @NintendoAmerica might want to look into what @skipper tweets about, the poisoning of police, while she represents Nintendo and their social media. https://t.co/P2PPwhQ3YW

As of writing, neither Twitch nor Nintendo have issued a statement regarding Wolf’s comment.