WizKids, a subsidiary of NECA Toys and the makers of HeroClix, Dice Masters, and Attack Wing severed their business relationship with designer Robert Burke after IGN writer Matt Thrower called him a bigot.

Thrower targeted Burke on Twitter writing, “Here’s a list of games by Robert Burke, together with many reasons why you should never buy one.”

Here’s a list of games by Robert Burke, together with many reasons why you should never buy one https://t.co/QwAremox6r pic.twitter.com/wmGG2SIkxe

It reads, “I am not canceled enough. Our games are still selling, so a list: Things to teach your child.”

It then lists six things to teach your child:

“1. You don’t have to believe all women. Some of them are liars.

2. Silence does not equal violence. Avoid people who say that and find more intelligent friends.

3. You can’t be healthy at any size. Obesity will make you unhappy and kill you.”

4. Trust the police. They can help if you are in trouble.

5. Respect the flag. People died for it. 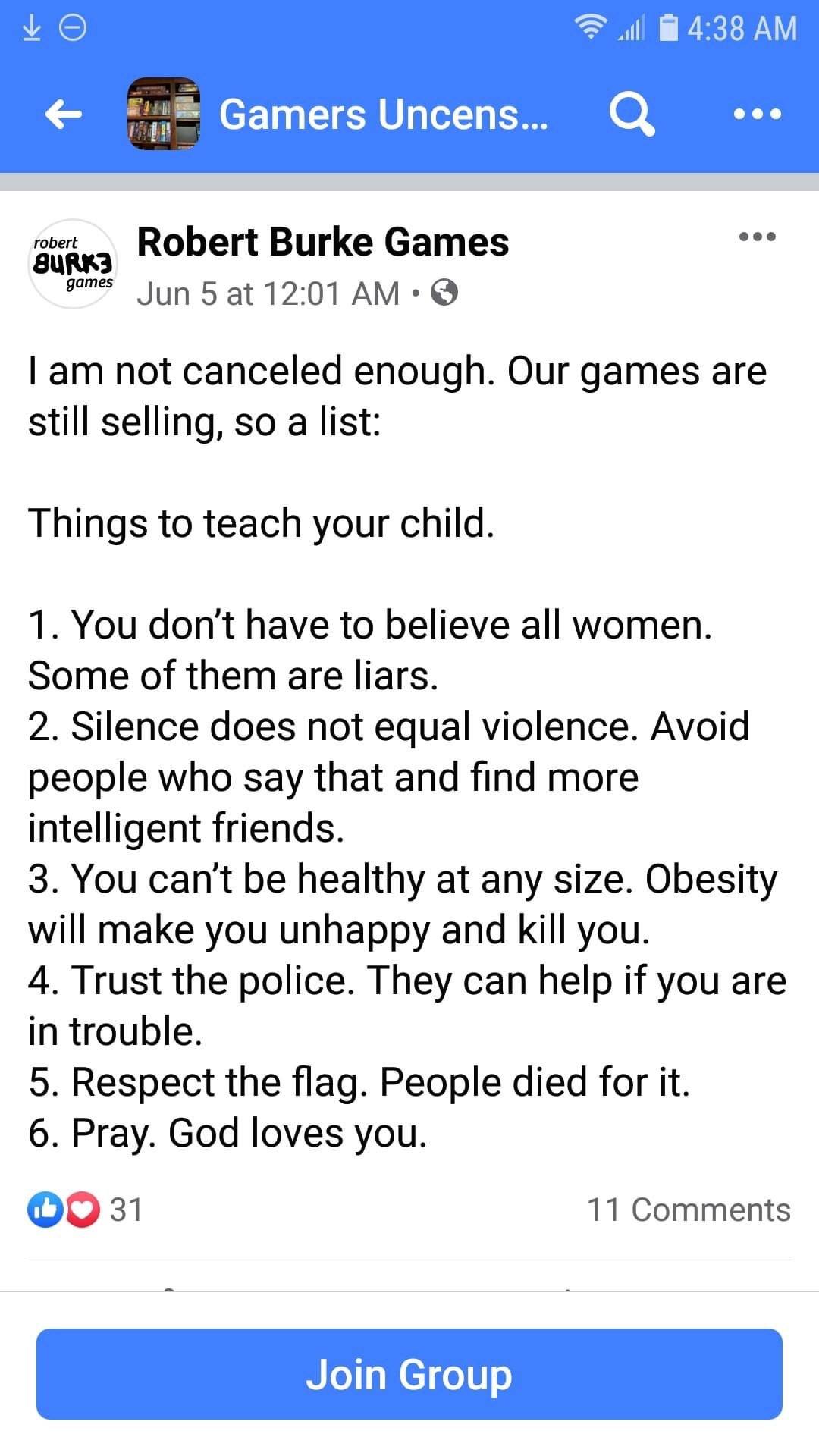 Thrower also included a screenshot of the following tweet, where two white people, Skylar and Seth, kneel down, then prostrate themselves, and then kiss a number of black people’s boots.

He also links to a list of 30 games that Robert Burke has designed on Board Game Geek.

Thrower would then subsequently tweet out a screenshot of a post he wrote on Burke’s Board Game Geek designer page where he calls Burke a bigot.

FWIW I just posted both to his designers page on BGG 😀 pic.twitter.com/KYzRwqoTdb

You can see the screenshot below. 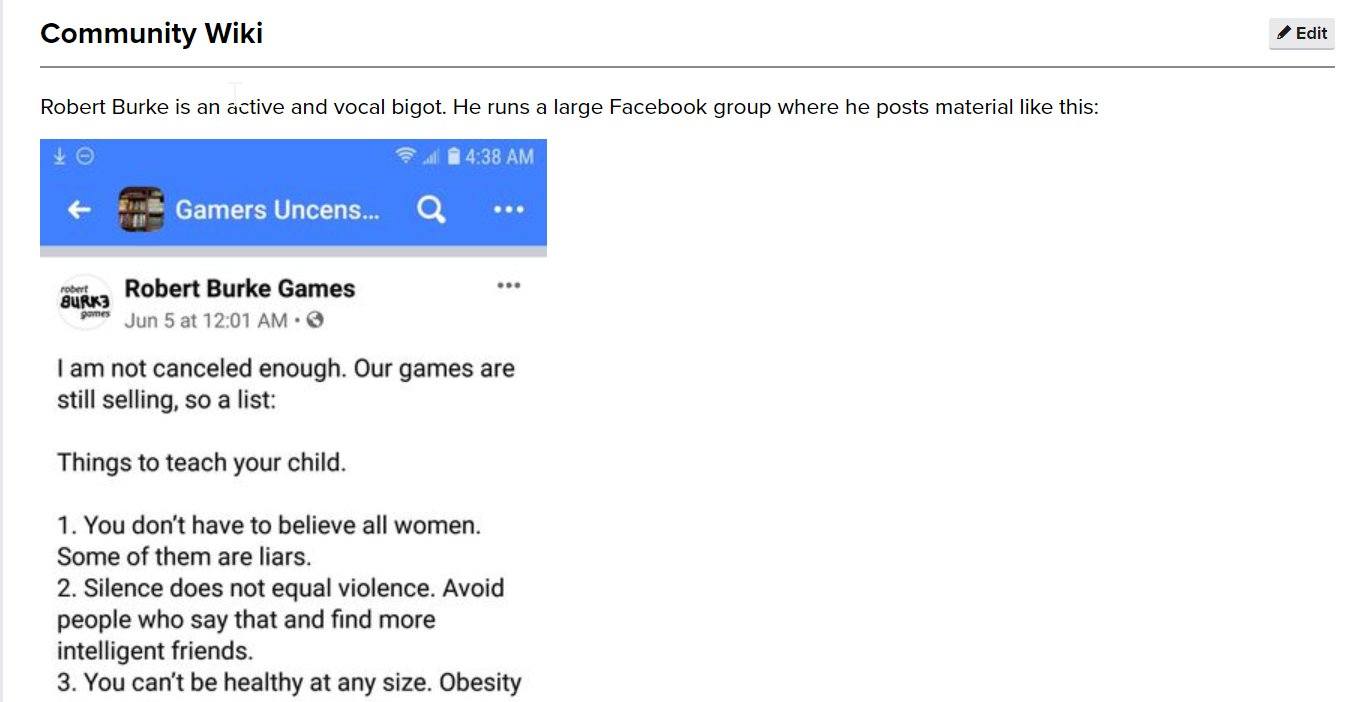 After targeting Burke, Indie Game Alliance announced they had removed Burke and his games from their guild. They did not provide an explanation as to why.

We have removed him and his games from our guild.

One person described Burke as “trash.” They didn’t offer an explanation either.

Thanks! To my horror I discovered one games was on my “interested” list. Needles to say, I removed it.

That guy is trash.

Another user shared a photo of throwing away what appears to be one of Burke’s games.

Another user attempted to get Burke cancelled by tagging a number of game publishers.

Hey @dicetower_news (well, Dice Tower in general) do you have any comment on this guy you’ve cross-promoted in the past?

WizKids would eventually join the mob announcing they were ending their relationship with Burke for “insensitive statements.”

They wrote, “In light of insensitive statements made by game designer Robert Burke, WizKids has decided to end its relationship with Robert Burke Games.”

They added, “As a result, WizKids will no longer sell or market any of Robert Burke’s games.” It’s unclear what exactly they deemed “insensitive.”

In light of insensitive statements made by game designer Robert Burke, WizKids has decided to end its relationship with Robert Burke Games. As a result, WizKids will no longer sell or market any of Robert Burke’s games.

Thrower would respond by thanking WizKids.

Thank you. This is much appreciated

Novelist and comic book writer Jon Del Arroz commented on WizKids’ decision saying, “Obviously, the things we need to do is, go to WizKids games and tell them we will not be supporting their games because… Look at what they are standing against. They are standing against pray, respect the flag, trust the police, obesity is bad, silence does not equal violence, and you do not have to believe women.”

Del Arroz adds, “This is what WizKids is saying they will cancel and destroy somebody’s career over. Which means they hate you as an American consumer of games. That means they hate you. You are a normal person and these are all normal things to think and say.”

He then encourages his followers to apply pressure to WizKids, “So if you want to voice to WizKids and put some social pressure on them, I would highly recommend doing so.”

Finally, he encourages people to support Burke, “But more importantly let’s support this guy who has the bravery to say something. That’s important to say in these kind of times.”

What do you make of WizKids joining this small Twitter mob and ending their relationship with Robert Burke? Do you plan on supporting WizKids in the future following this decision? Will you support Robert Burke?