Scooby-Doo! Mystery Incorporated producer Tony Cervone claimed that Velma is gay in the show while James Gunn reveals that his live-action version of the character from 2002 was originally written to be gay.

Cervone posted to Instagram an image of Velma alongside Scooby-Doo! Mystery Incorporated original character Marcie Fleach a.k.a Hot Dog Water. Not only are the two characters shown standing next to each other, but there is also a rainbow flag background and “Pride” written below them.

As shared in the FOTP Forums, Cervone would be criticized by at least one fan of the show in the comments with one user stating, “that’s not cannon stop painting it to be, just because they wear similar stuff doesnt mean there dating, f*** sakes she was the villain in that episode right? Besides Velma likes shaggy that’s the cannon.”

That’s when Cervone would chime in.

He would write, “I’ve said this before, but Velma in Mystery Incorporated is not bi. She’s gay. We always planned on Velma acting a little off and out of character while she was dating Shaggy because that relationship was wrong for her and she had unspoken difficulty with the why.”

Cervone added, “There are hints about the why in that episode with the mermaid, and if you follow the entire Marcie arc it seems as clear as we could make it 10 years ago. I don’t think Marcie and Velma had time to act on their feelings during the main timeline, but post reset, they are a couple. You can not like it, but this was our intention.” 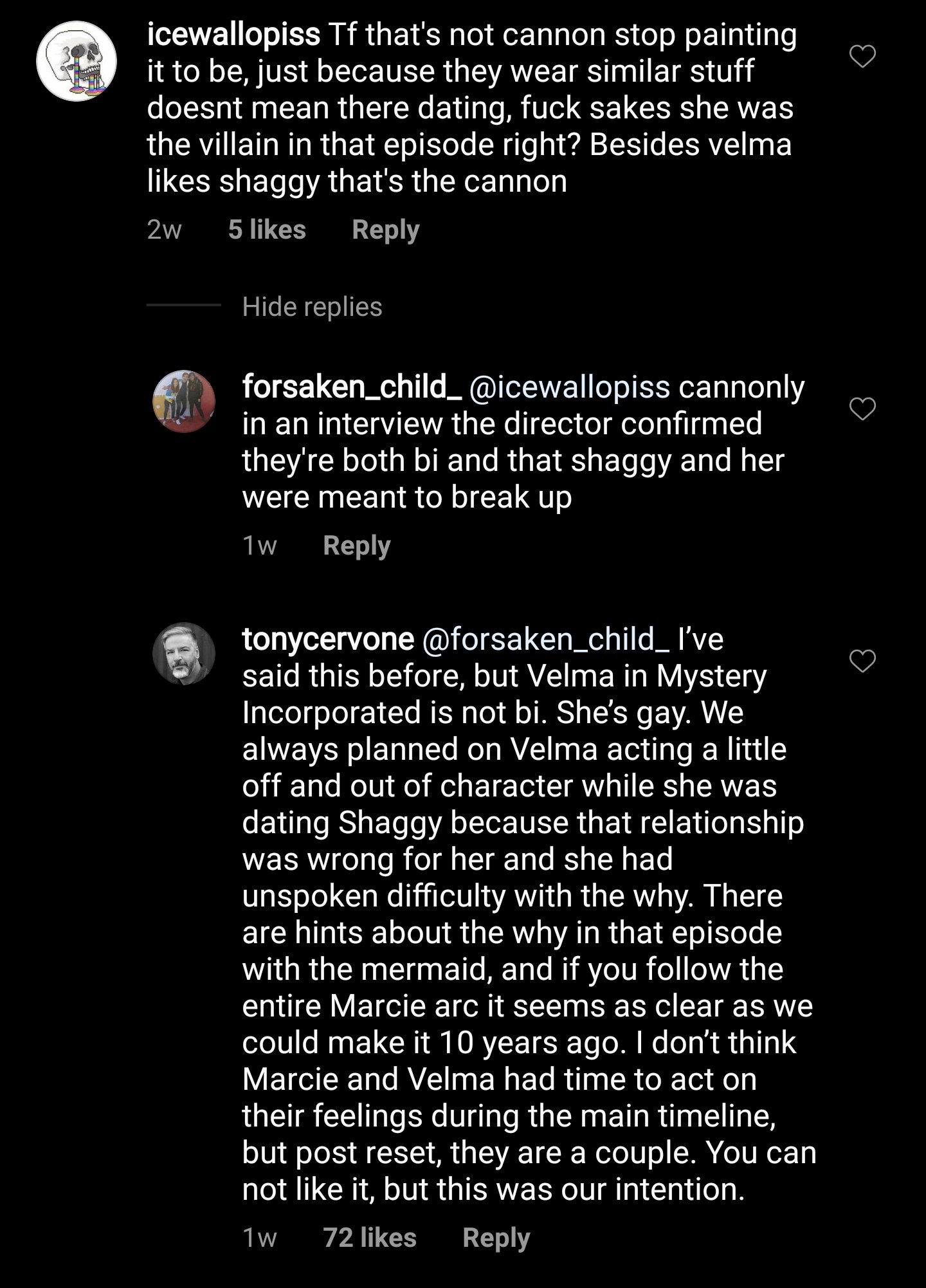 Suicide Squad director and the writer of the 2002 Scooby-Doo film James Gunn also recently indicated that he initially wrote Velma as “explicitly gay.”

Gunn responded to a fan who wanted him to make a lesbian Velma. He wrote, “I tried! In 2001 Velma was explicitly gay in my initial script.”

He added, “But the studio just kept watering it down & watering it down, becoming ambiguous (the version shot), then nothing (the released version) & finally having a boyfriend (the sequel).”

I tried! In 2001 Velma was explicitly gay in my initial script. But the studio just kept watering it down & watering it down, becoming ambiguous (the version shot), then nothing (the released version) & finally having a boyfriend (the sequel). 😐 https://t.co/Pxho6Ju1oQ

What do you make of Cervone and Gunn’s comments?