The director of the recently released Netflix film Cuties, Maïmouna Doucouré, recently defended the film while speaking at a panel at the Toronto Film Festival on French filmmakers.

As reported by The Hollywood Reporter, Doucouré defended the film claiming she made it as a warning in order to protect children.

Doucouré stated, “It’s because I saw so many things and so many issues around me lived by young girls, that I decided to make this film and sound an alarm and say we need to protect our children.” 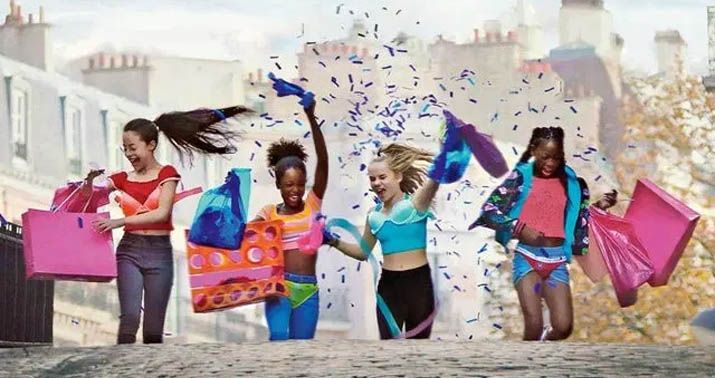 She went on to say, “It’s bold, it’s feminist, but it’s so important and necessary to create debate and try to find solutions, for me as an artist, for politicians and parents. It’s a real issue.”

The director added, “It’s important to see someone like you on the screen, and to grow up with a lot of possibilities. So, of course, diversity and inclusion have to be the keys to progress in our cinema.”

Not only did the director defend the film, but Netflix did as well. In a statement sent to THR they described the film as “a social commentary against the sexualization of young children. It’s an award winning film and a powerful story about the pressure young girls face on social media and from society more generally growing up – and we’d encourage anyone who cares about these important issues to watch the movie.”

In an over six-minute video published to the Netflix Film Club YouTube channel, Doucouré explained why she made the film.

She began the video explaining the film, “Cuties is the story of an 11-year-old little girl who is trying to find herself. She is navigating between two models of femininity. One represents her mother’s traditional origins. And the other one is a group of young girls called cuties.”

Doucouré then detailed where the idea behind the film came from. She explained, “I had the idea of Cuties when, one day, during a neighborhood gathering in Paris, a group of very young dancers came on the stage and they were dancing like what we are used to seeing on a video clip.”

“And I was surprised because of their age. They were only 11 years old. So I decided to spend the next year and a half doing research,” she continued.

Doucouré then added, “I met with hundreds of pre-teens who told me their stories. I needed to know how they felt about their own femininity in today’s society and how they dealt with their self-image at a time when social media is so important.”

“Our girls see that the more a woman is overly sexualized on social media the more she is successful. And the children just imitate what they see trying to achieve the same result without understanding the meaning. And, yeah, it’s dangerous.”

Later in the video she stated, “Today, I can use my voice, my art to share my vision for femininity. My fight for women’s freedom in society, and in our minds as well. I put my heart into this film because this is my story.”

She continued, “I believe that cinema, and art in general, can change the world. We are able to see oppression of women in other cultures. But my question is, isn’t the objectification of a woman’s body that we often see in our Western culture not another kind of oppression?”

She then discussed her research saying, “In my research, I saw that pre-teenagers are caught in a difficult transition. Their body is constantly changing. And at this age, especially when you are a girl, it can be complicated to find your place and deal with your body that is transforming itself in spite of what you want. You are a child but you are also coming into teenagerhood.”

Doucouré continued, “This age is amazing because you have all this innocence and naivete, and you interpret the world with all the unlimited imagination that you have at that age. And this is beautiful. But at the same time  because of our societal structures, children can so easily access a lot of adult materials.”

She goes on to discuss the film’s main character Amy saying, “In the film, my main character, Amy, can feel the suffering of her mother and yet see that her mother does not take action. So Amy just takes that revolt inside herself and believes she can find her freedom through that group of dancers and their hyper-sexualization. But is that really true freedom? Especially when you are a kid? Of course not.”

She adds, “Amy will, at the end, understand that she can choose her own path. The real question of Cuties is, can we, as women, truly choose who we want to be beyond the role models that are imposed upon us by society.”

Doucouré then declared the film is feminist film. She explained, “Cuties is a deeply feminist film with an activist message. We must all together figure out what is the best for our children. As a director, as an artist, I am doing my part with this film. Politicians, the educational system, parents, children… I think all together we have to fix what’s gone wrong so we can give the most beautiful space to our girls and boys to grow up safely and become the best version of the themselves.”

The film has come under criticism from the Parents Television Council who state, “This film could have been a powerful rebuke of popular culture that sexualizes children and robs them of their innocence. But these young actresses were sexualized in the making of this movie.”

They also claim that the main character “Amy takes a photo of her genital area and posts it online to prove that she’s no child.”

They also detail that “in addition to being coached and trained in highly sexualized dance routines, these girls use foul, vulgar language like “f**k,” “b***h,” and “t*ts.” They are made to wear revealing clothing.”

The PTC also says the film shows Amy “pulling her pants and underpants down so she can photograph her genitals. In another scene Amy attempts to seduce a grown man – a family member, no less — to get out of trouble for stealing his cell phone.”

They have launched a petition asking Netflix to pull Cuties from their platform and “Stop endangering our children.”

The film has also come under scrutiny from politicians. Senator Ted Cruz of Texas sent a letter to the Justice Department requesting an investigation into Netflix on whether it violated any federal laws “against the production and distribution of child pornography.”

You can read his full letter below. 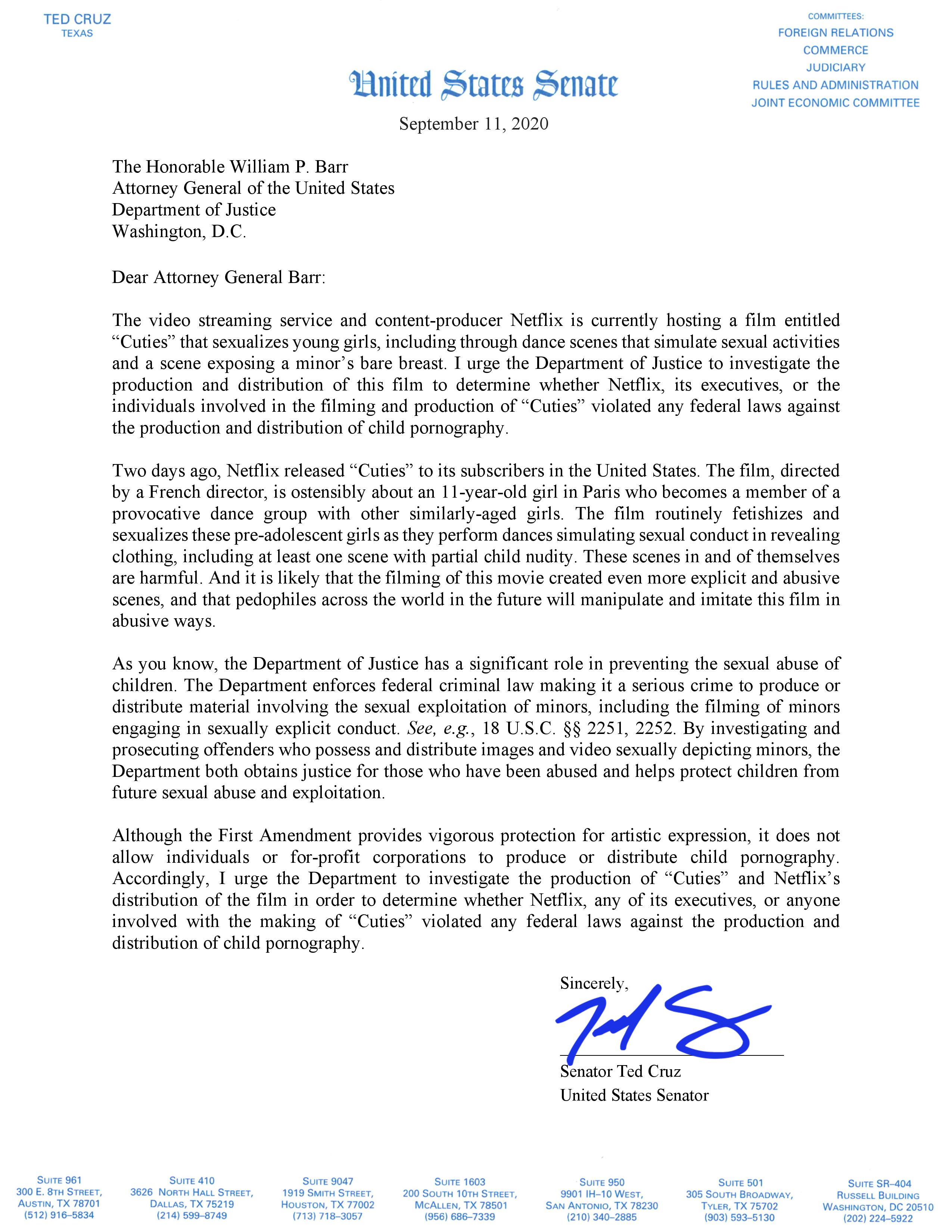 Cruz wasn’t the only politician to call for an investigation. Texas House Representative Matt Schaefer also called for one.

He wrote on Twitter, “I have asked Texas Attorney General Paxton’s office to investigate the Netflix film ‘Cuties’ for possible violations of child exploitation and child pornography laws.” 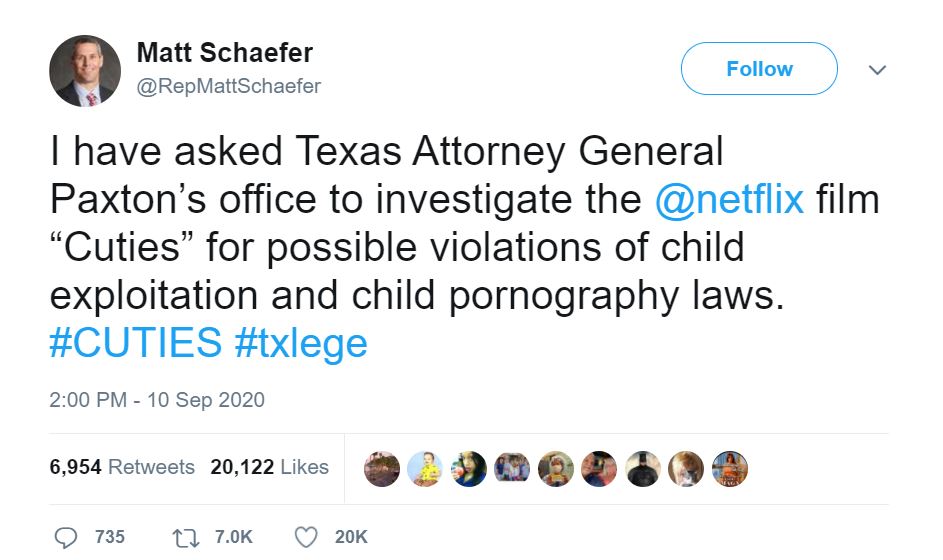 What do you make of Doucouré’s and Netflix’s defense of the film? Do you think an investigation should be launched into Netflix and the film?