A new rumor claims that Black Panther and Creed actor Michael B. Jordan will play a reimagined Tony Montana in a Scarface remake.

The rumor appears to come from the All Love Hip Hop Twitter handle, who write, “Michael B. Jordan has reportedly been casted to play ‘Tony Montana’ in the new Scarface remake.” 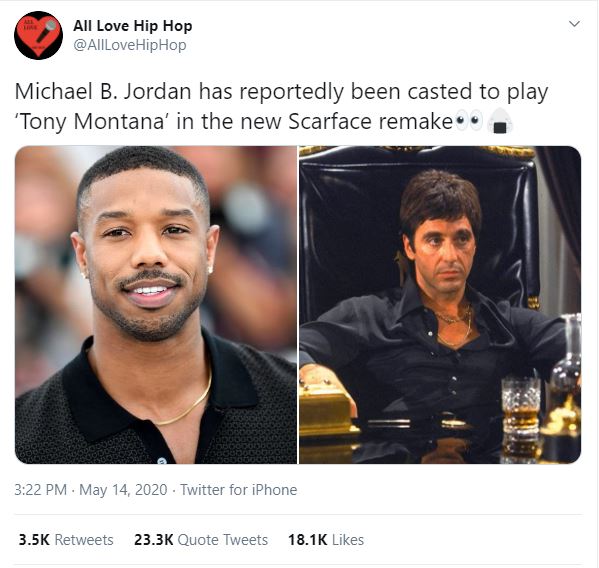 Newsweek also reported on the rumor stating, “Most recently, Michael B. Jordan has been rumored to play the titular role.”

Deadline reports a reimagination of Scarface has been in the works since 2011 when directors David Ayer and Antoine Fuqua were attached. Most recently they reported that Call Me By Your Name director Luca Guadagnino was set to direct the reimagining back in May 2020.

Guadagnino will reportedly work off a script from Joel Coen and Ethan Coen, who Deadline claims have been on board the project for at least three years. 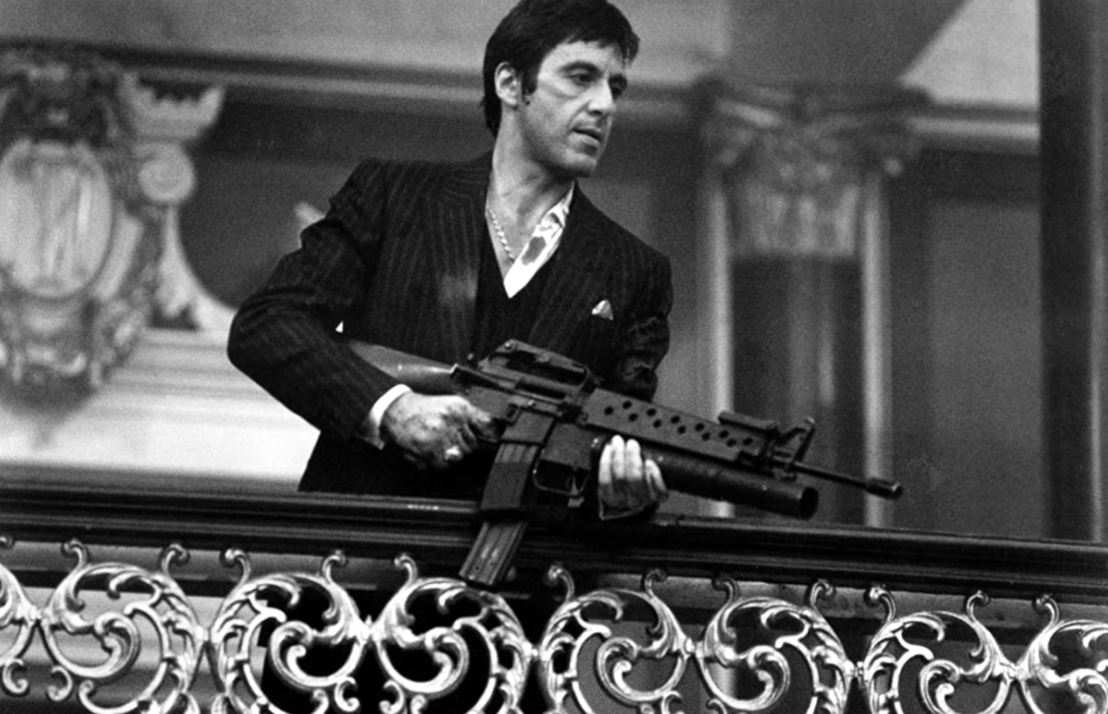 This reimagined Scarface film will reportedly take place in Los Angeles, a shift from the first 1983 remake that took place in Miami and starred Al Pacino as Cuban gangster Tony Montana.

The original film titled Scarface: The Shame of the Nation was released in 1932 from directors Howard Hawks and Richard Rosson based on the novel by Armitage Trail and a screen story from Beh Hecht. 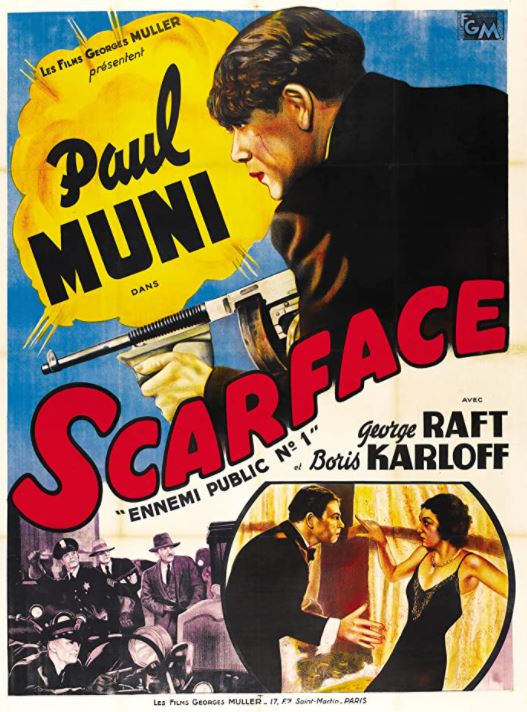 The film starred Paul Muni as Tony Camonte, Osgood Perkins as Johnny Lovo, and Ann Dvorak as Cesca Camonte. It saw Tony Camonte carry out a hit on the head of the bootlegging crime syndicate on the south side of Chicago, Big Louis Costillo.

Following the hit, Camonte becomes the second man to Johnny Lovo. However, Tony has big ambitious and quickly begins disregarding orders from Lovo and begins encroaching on the turf of an Irish gang led by a man named O’Hara. He continues taking out the competition as he plans to take control of not just the south side of Chicago, but the entire city.

However, Camonte’s downfall might actually be due to the two women in Tony’s life that include Johnny Lovo’s girlfriend, Poppy, who Tony is attracted to and his willful younger sister Cesca, who Tony forbids from going out on the town and dating men. However, she refuses and this flusters Tony and makes him vulnerable to his opponents which includes rival gangs and the police. 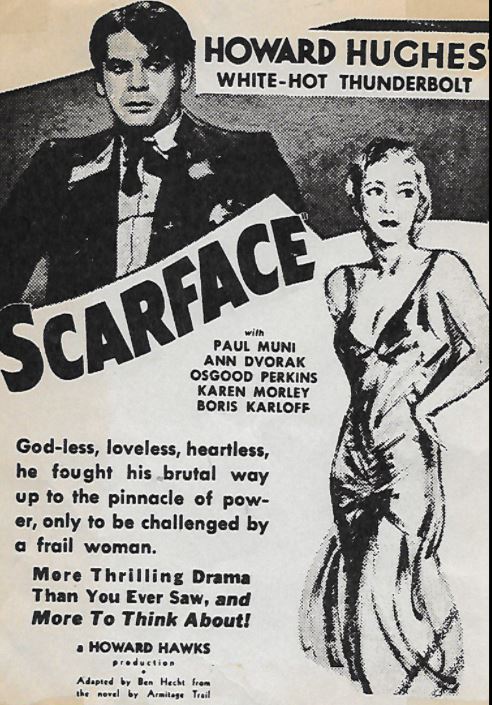 Jordan is no stranger to playing race-swapped roles. He will star as Irish American John Clark in the upcoming adaptation of Tom Clancy’s Without Remorse. He also played a race-swapped Johnny Storm in the Fantastic Four remake.

Jordan has also recently come out as an anti-police advocate penning a roadmap for the Color of Change organization that calls for Hollywood to “divest from the police.”

In a letter promoting the roadmap, Jordan alongside with Rashad Robinson wrote, “The history of racism in Hollywood is long and unforgivable: excluding Black talent, silencing Black voices, derailing Black careers, and using both the economic and cultural power of the industry to prop up police departments and the status quo of the criminal justice system.”

Jordan and Robinson continued, “We can break the pattern, and change that trajectory. The understanding of Hollywood’s impact on society has never been more widespread, and the demand for addressing systemic racism in Hollywood has never been greater. We must answer the call to action.” 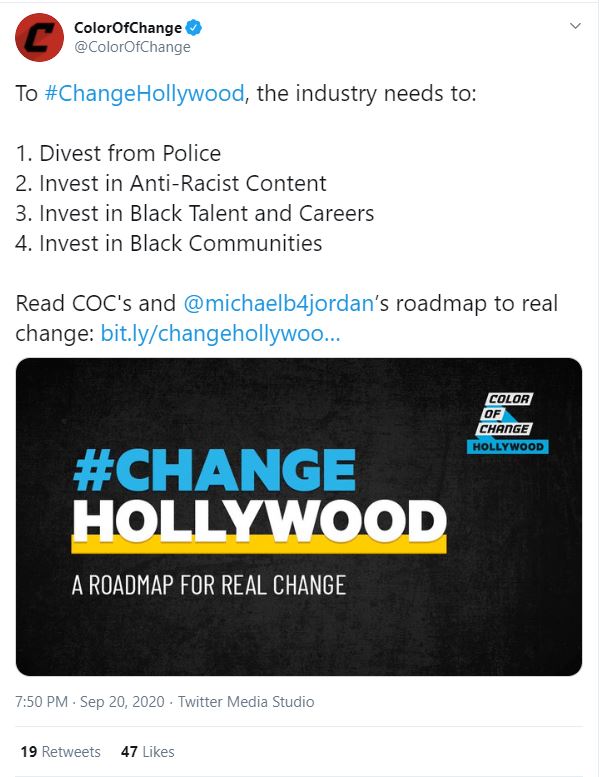 What do you make of this rumor? Do you want to see a reimagining  of Scarface with Michael B. Jordan as the star?