Gunn made the announcement on Twitter writing, “I’m over-the-moon excited to be working on Peacemaker with my pals John Cena and The Suicide Squad producer Peter Safran on this new HBO Max original series from Warner Bros. TV and DC Comics.” 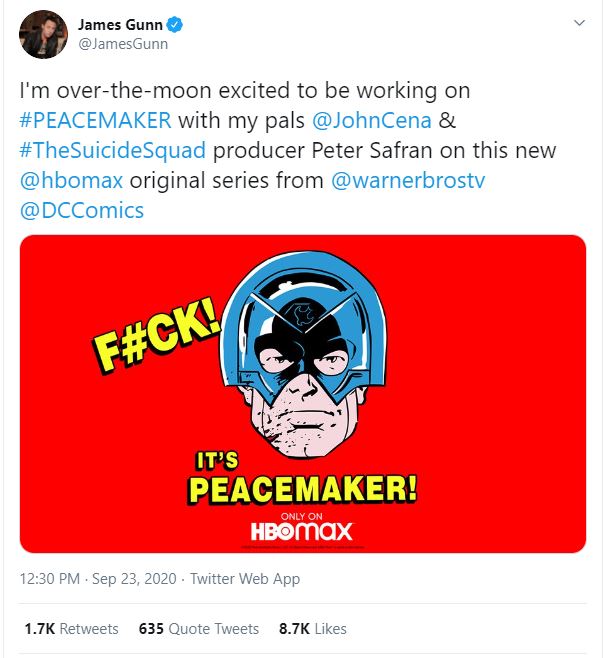 He would add in a press release, “Peacemaker is an opportunity to delve into current world issues through the lens of this superhero/supervillain/and world’s biggest douchebag.”

Gunn continued, “I’m excited to expand The Suicide Squad and bring this character from the DC film universe to the full breadth of a series. And of course, to be able to work again with John, Peter, and my friends at Warner Bros. is the icing on the cake.”

Cena would also announce the show on Twitter writing, “Working alongside James Gunn on Suicide Squad was an absolute masterclass in how to best bring beloved characters to life in a new and fun way.”

He added, “I cannot wait for the DC Universe to experience more of absurdity that is the Peacemaker in this new project on HBO Max!!” 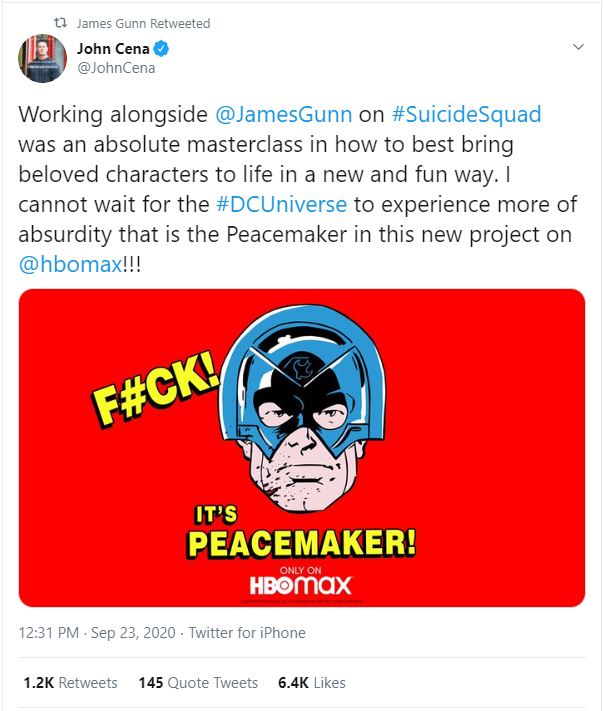 In the press release he added, “I have said before that it has been a tremendous honor and an incredible opportunity to be part of The Suicide Squad and to work with James on what is going to be a fantastic movie.”

“I am unbelievably excited to have the chance to team up with him again for Peacemaker. We can’t wait for fans to see this,” Cena stated.

Chief Content Officer for HBO and HBO Max also stated, “James Gunn has the unique ability to create an expansive universe while also bringing to life the soul and wit of each character. We look forward to a deep dive into the world of Peacemaker.”

HBO Max detailed the series will “explore the origins of the Peacemaker character, the master of weapons from the highly anticipated upcoming The Suicide Squad film, in the new Max Original action-adventure-comedy series Peacemaker.”

They add, “The series will explore the origins of the character that Cena will play in the upcoming film, a man who believes in peace at any cost — no matter how many people he has to kill to get it.”

The first season of the show will be eight episodes long with Gunn writing all eight episodes. Gunn will also direct a number of the episodes, including the first one.

The series will be produced by Gunn’s Troll Court Entertainment and The Safran Company alongside Warner Bros. Television.

Production on the show is expected to begin sometime in early 2021 before Gunn begins working on the next Guardians of the Galaxy movie.

What do you make of this announcement? Are you interested in checking out Peacemaker when it arrives on HBO Max?