Quaid, who plays Hughie Campbell on Amazon’s The Boys and voices Ensign Boimler on Star Trek: Lower Decks, recently took to Twitter, where he wrote, “Hey it’s 11:24pm on a Saturday and I just thought this would be a good time to say: F*** Donald Trump.” 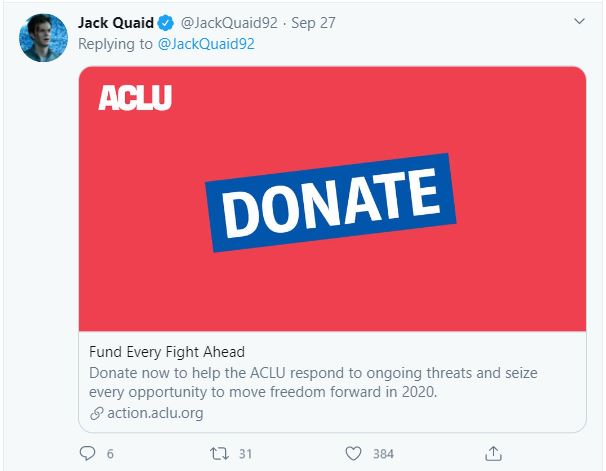 The page reads, “Donate now to help the ACLU respond to ongoing threats and seize every opportunity to move freedom forward in 2020.”

It adds, “With your support, we can stay ready to act at a moment’s notice whenever the Trump administration abuses power or undermines people’s rights.” 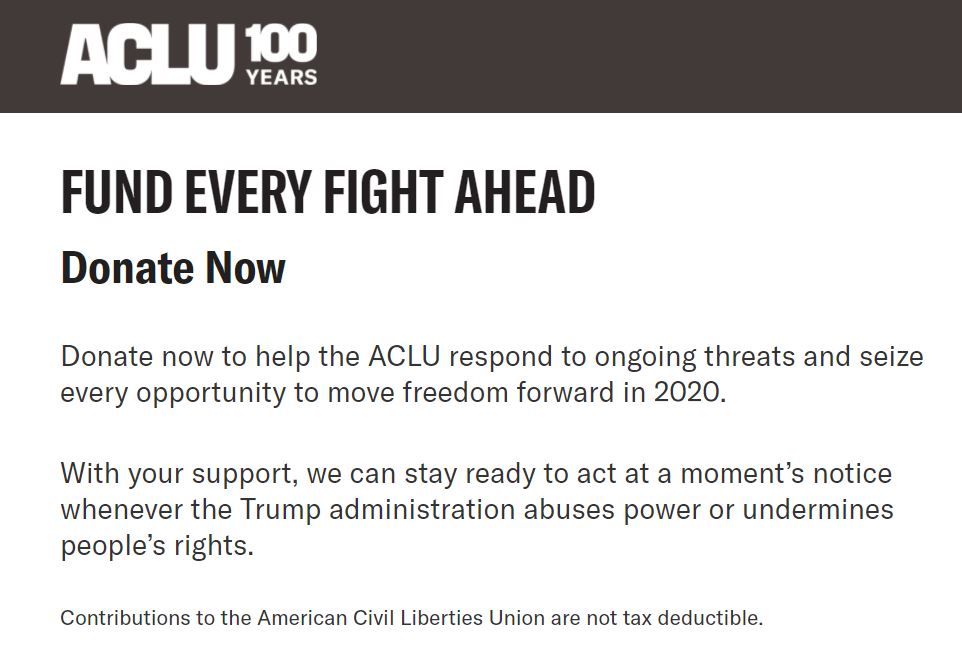 Quaid would also follow it up with two other tweets saying “F*** Donald Trump.”

In response to one user who questioned, “When is it not a good time to say that?” Quaid wrote, “Never. F*** Donald Trump. See? Never gets old.” 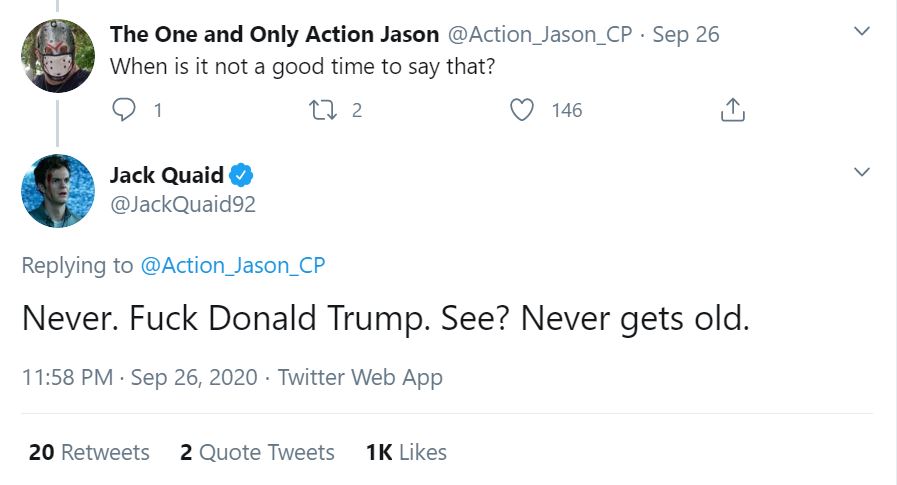 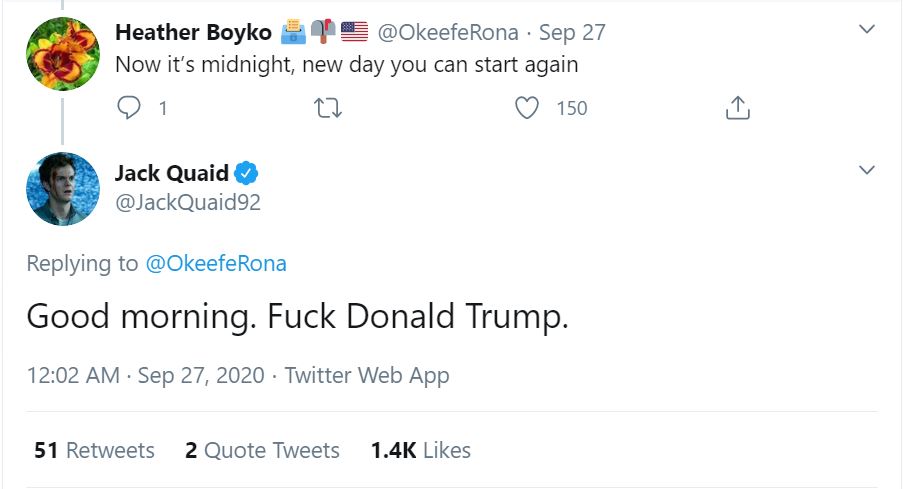 Quaid is no stranger to tweeting about President Trump. Earlier this month he insinuated the Trump administration is responsible for forest fires in his home state.

Quaid wrote, “Okay then what do you suggest?Cause Trump doesn’t believe climate change even exists. This is not going to get better with him as president for the next 4 years. Meanwhile my home state is literally on fire and it’s getting worse every year.” 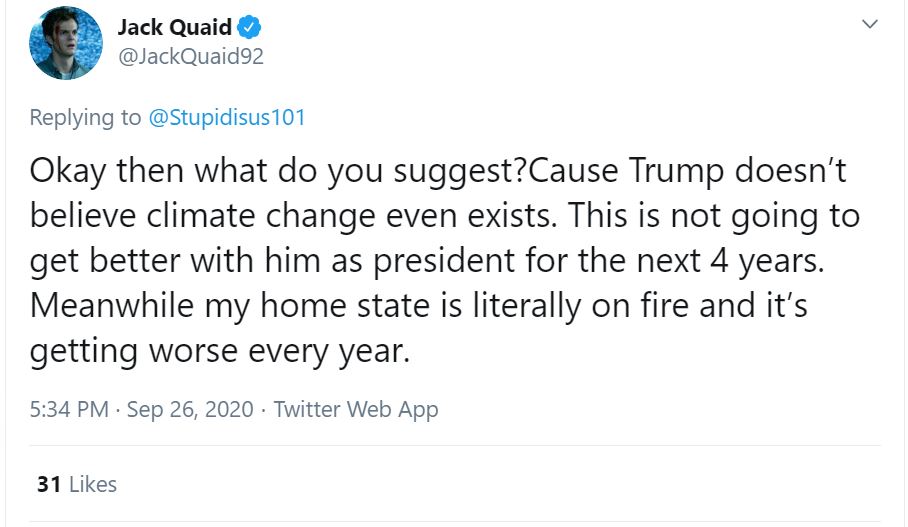 Earlier in September, he also wrote, “My home state is on fire. People are losing their homes. Air quality = horrific. Getting worse every year. Trump doesn’t care about fixing it. Shoots down the experts with a smile as if to say ” i don’t give 2 f***s about you” and ur gonna respond with a GIF from Austin Powers 3?” 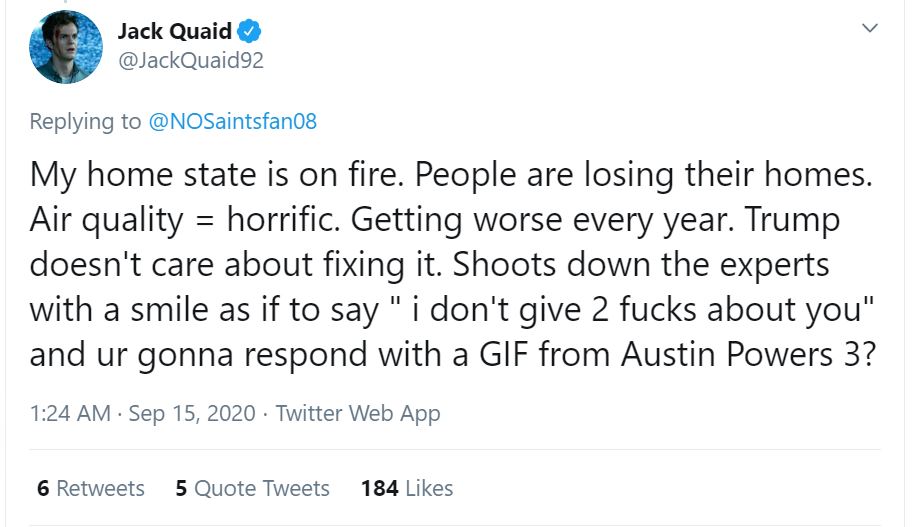 In June, Quaid described President Trump as “basically just a shitty open-mic comic at this point.”

He added, “This whole “COVID’s got too many names! I can’t keep up!” bit is probably written on a cocktail napkin somewhere and I hate it.”

Previously, Quaid appeared to make a number of jokes about Donald Trump during his debate performances against Hillary Clinton in 2016.

In one tweet he wrote, “Does trump think that being president depends on Dungeons and Dragons stats?”

In another he tweeted, “Trump just pitched the best “Wait! WE’RE neighbors!?” sitcom I’ve ever heard of.”

As previously mentioned, Quaid plays Hughie Campbell on The Boys and Ensign Boimler on Star Trek: Lower Decks. He’s also expected to play a role in the upcoming Scream 5 film alongside Courteney Cox and David Arquette.

The actor previously portrayed Connor in Rampage and Marvel in The Hunger Games and The Hunger Games: Catching Fire. He also provided the voice for Dirhael in Middle-Earth: Shadow of Mordor.