An alleged toy leak from Marvel Studios’ upcoming The Eternals film reveals the design and look of what might be the main villain for the film, the Deviant warlord Kro.

As Dtapia22 notes the picture was circulated around the internet and made it’s way on to multiple forums including TheFwoosh and Reddit’s MarvelStudiosSpoilers.

However, what many of those forums didn’t originally have is the back of the box featuring Kro, which gives us a brief description of the character.

As shared in Dtapia22’s Instagram post, the box describes Kro as “a powerful Deviant unlike any other the Eternals have faced over the millenia, Kro’s appearance is the harbinger for a global threat.” 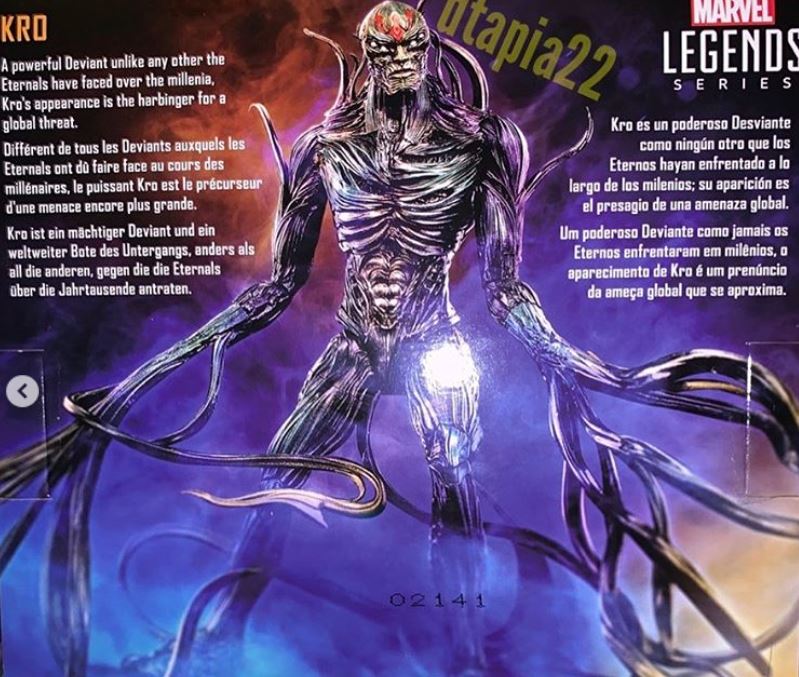 This alleged leak of Kro comes just about a month after another alleged Marvel Legends figure leaked from The Eternals depicting Salma Hayek’s Ajak. 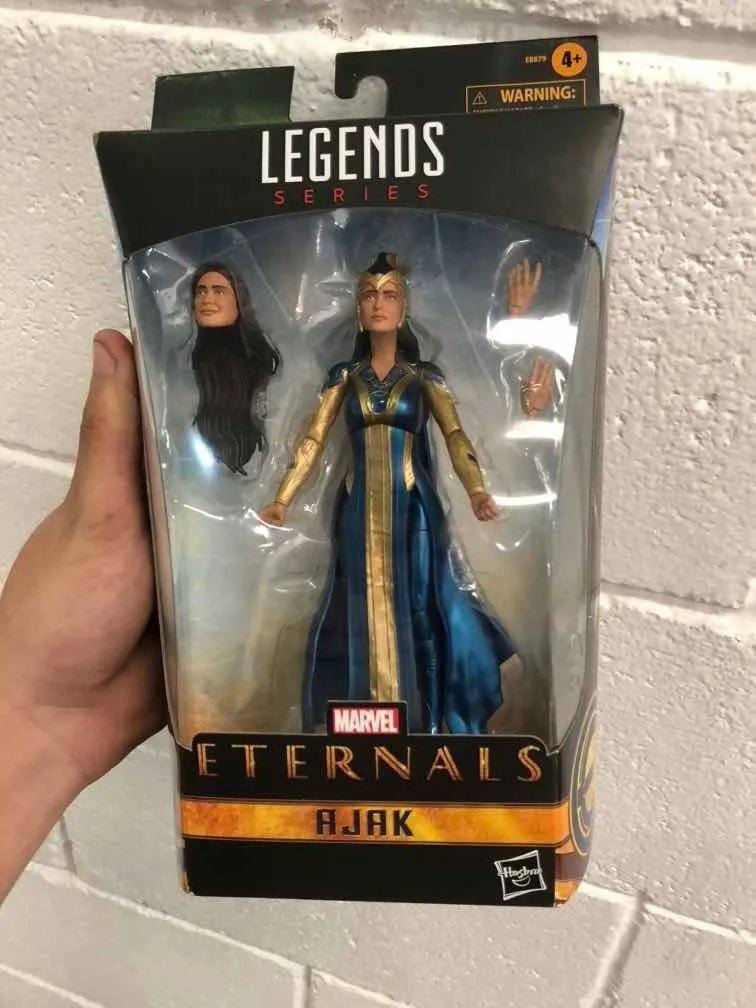 Kro In The Comics 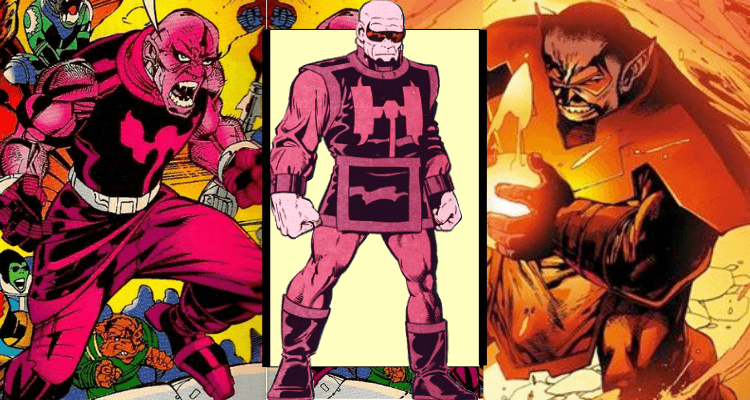 Deviants have a long-standing feud with the Eternals in the comics. The Deviants are deemed as failed experiments by their Celestial creators. They have super powers, but not to the same extent as their Eternal counterparts.

Kro is a warlord Deviant, who has at times become a leader of the group. He was introduced in Jack Kirby’s The Eternals #1 back in 1976 and served under the Deviant monarch Brother Tode.

While Kro might have been initially introduced in The Eternals #1, the character has taken on the forms of others including the 1940s villain Rudolph Hendler. He’s also taken on the form of Pluto, Satan, and other demonic entities.

Kro’s shapeshifting abilities were revealed in The Eternals #3 after he was being tortured by Brother Tode for failing to disable the Celestials’ cosmic beacon. As Kirby writes, Kro has the “ability to manipulate his own atomic structure.” He reveals to Brother Tode, two horns growing out of his head, as he takes on the iconic look of Satan. 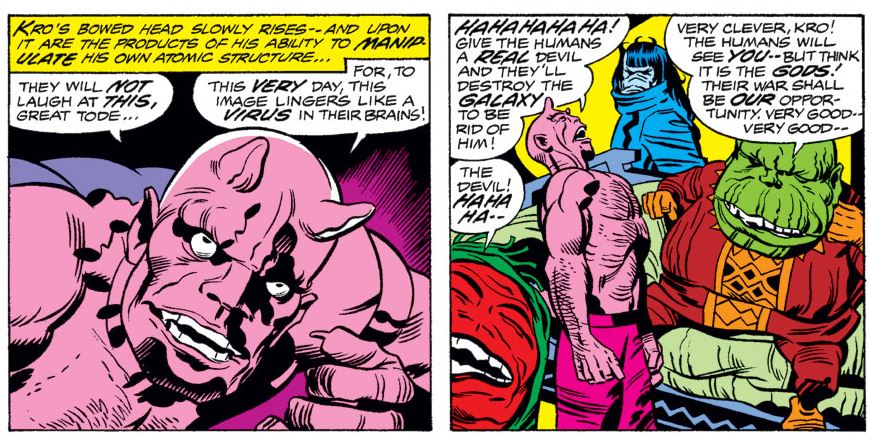 Interestingly, Kro also has an on-and-off relationship with Thena of the Eternals, and at some point has children with her. In their thousands of years of conflict, he eventually gets with her during the Vietnam War.

From that, Thena becomes pregnant and gives birth to twin children without Kro’s knowledge. He finds out eventually about their existence, and at times teams up with Thena to defend the lives of the twins. 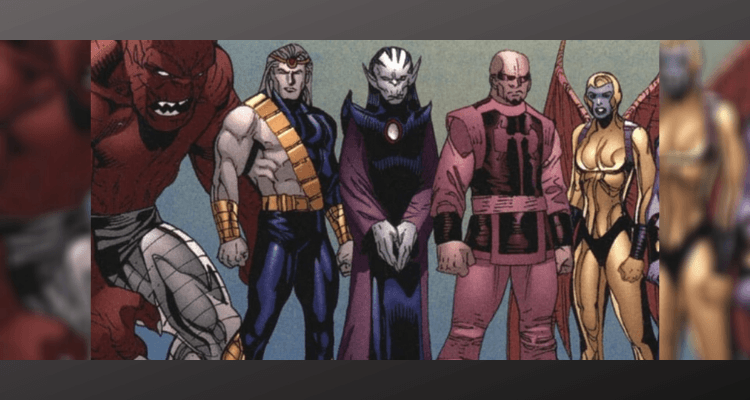 Their children in their own right have appeared in comics very rarely since their introduction.

Deviation From The Deviant

Given this is alleged leak is our only look at what Kro might look like, it’s unclear if this is the base form of the Deviant race or if this is some kind of final boss mode Kro takes on during the film.

One Twitter user believes it is his final form.

As for the actual design, people are divided about the shift away from Jack Kirby’s original design.

One user described the toy as a combination between Groot and Abomination.

On Reddit, DJ_Binding described the character as a combination of Steppenwolf and Incubus from Suicide Squad.

They wrote, “Kro is a cool villain, but I’m getting major Dark Elf/Steppenwolf/whatever the hell the villain of Suicide Squad was vibes from this design. Idk. Not a fan. I would’ve preferred something resembling a modernized version of his comic outfit.

Another wrote, “Looking at the Kirby version, there’s nothing really distinct about the original design. Looks like a bald dude in a jumpsuit with shades.

What do you think about the supposed leak of Kro’s design for the upcoming Eternals film? Sound off in the comments below or let’s talk about it on social media!