If you are unfamiliar with the Gundam Gusion, it was created during the Calamity War along with 72 other Gundam Frames by Gjallarhorn in order to counter the mobile suits like the Hashmal.

According to a translation of the High Grade 1/1444 ASW-G-11 Gundam Gusion Model Kit Manual, it’s revealed the Gundam was abandoned following the Calamity War and lay dormant in a high density debris belt. 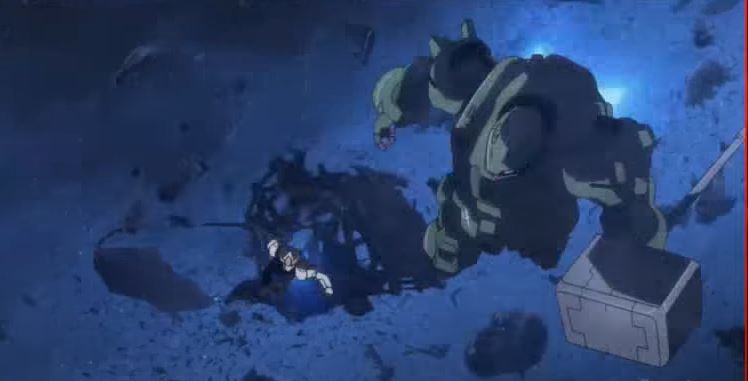 300 years after the Calamity War that high density debris belt is controlled by the Brewers pirates and the Gundam is manned by the brutal and sadistic Kudal Cadel.

The Brewers pirates primarily targeted merchant ships traveling trade routes between Earth and Mars. However, they also were involved in human trafficking and used human children as slaves and forced them upon the punishment of death to pilot a number of their mobile suits.

Cadel is the second in charge of the Brewers and the commander of their mobile suit forces and is seen abusing the human slaves and threatening to kill them if they do not perform up to his satistifcation. 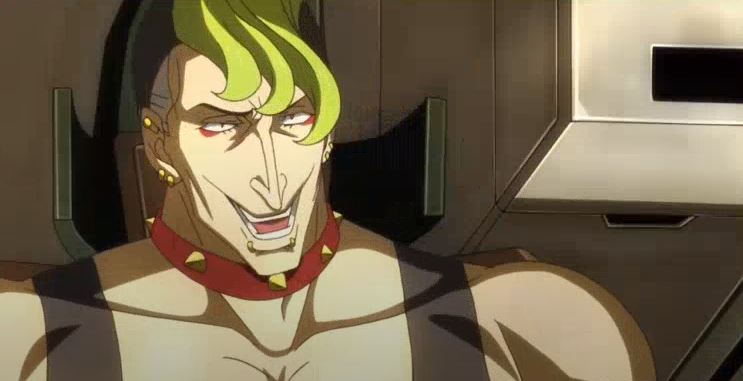 As for the the Gusion, it has two Ahab Reactors allowing it be equipped with super heavy armor that makes it pretty much immune to anti-aircraft fire.

It also features large propellant tanks equipped inside the armor that reduces the Gundam’s fuel consumption risk that would otherwise be massive due to the machine’s weight.

While the Gusion has formidable defenses, it’s offensive capabilities are not to be underestimated. The Gusion comes with the Gusion Hammer a “super dreadnought weapon that desrtoys using its mass with a weight that exceeds 15 tons.” The hammer’s power and accuracy can also be enhanced with thrusters. 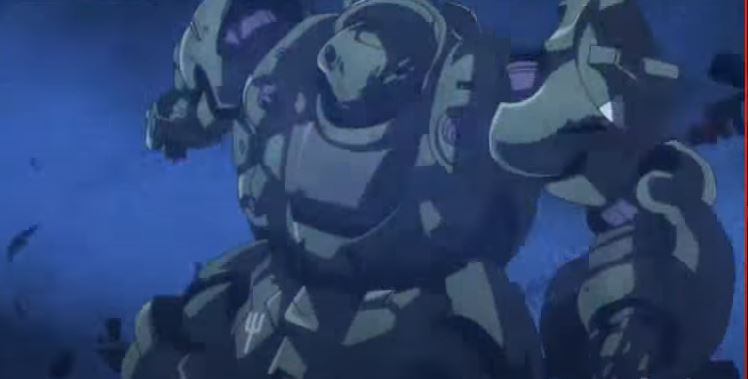 The Gusion is also equipped with a widely used mobile suit submachine gun. The gun is lightweight making it easy to handle and is the pirates’ weapon of choice due to its low cost.

The Gundam does have a few weakness. First, the Brewers have it equipped only for space operations so it wouldn’t do well when affected by gravity. It’s exclusively used in space operations.

Second, there are gaps between its armor which are exploited by Mikazuki Augus piloting the ASW-G-08 Gundam Barbatos.

In fact, Mikazuki is able to cripple the Gusion and kill Kudal Cadel with the Barbatos’s long sword. 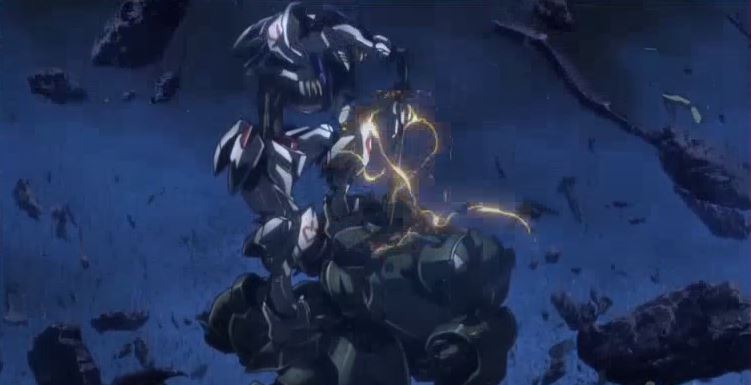 Despite the Gusion being defeated by Mikazuki and the Barbatos, it has been brought to life by artist and Twitter user @Bo55L, who recently shared his new illustration depicting the fearsome Gundam smashing Marvel Comics’ Captain Marvel in the face.

You can see the massive Gusion using the Gusion Hammer to swat Captain Marvel like a bug. 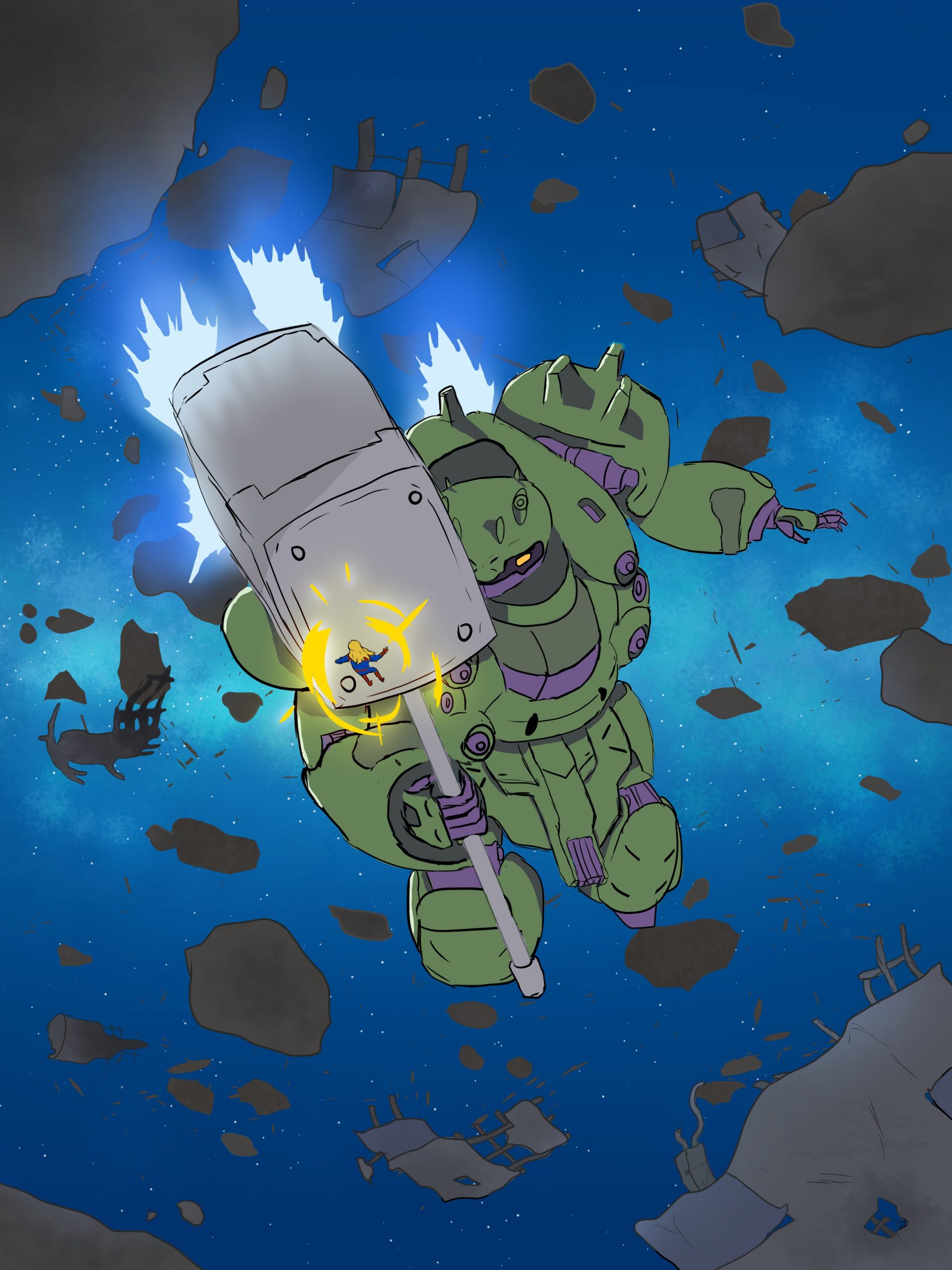 @Bo55L tells us he got the idea to have Captain Marvel face off against the Gusion because “Gundams have nanolaminate armor which deflects and diffuses beam attacks so Captain Marvel wouldn’t just be able to one shot the cockpit.”

What do you make of @Bo55L’s illustration showing the Gusion taking on Captain Marvel?