BBC America recently revealed the first trailer for their upcoming show The Watch, which they claim is based on Terry Pratchet’s Discworld novels.

There have been a total of 41 Discworld novels published with the first novel, The Colour of Magic, being published in 1983. Many of the novels parody fantasy clichés as well as other subgenres like witches and vampires.

For example, the series’ first protagonist Rincewind is a failed wizarding student who is constantly fleeing for his life. Unlike traditional wizards, Rincewind’s ambition is to settle down and just enjoy some peace and quiet.

With the release of the The Watch’s first trailer, fans of the Discworld series shared their disgust and lampooned the trailer.

On YouTube, one user wrote, “NOOOOO WHAT IS THIS POOR SYBIL WHY DID THEY MAKE HER SO SKINNY NOOOOOOOOOOOOOOO”

Another added, “these sneaks are like an example of uncanny valley: you can see where it came from, and what it could be, but it’s not, and that’s jarring.”

One user wrote, “was so looking forward to this but oh dear, thats not a good trailer, why does Vimes look like a punk? Why does Angua also look like a Punk, why is notVimes flipping off a gender switched Vetenari? why do the costumes look modern? Why is Cheery Littlebottom 6ft? and not a dwarf?” 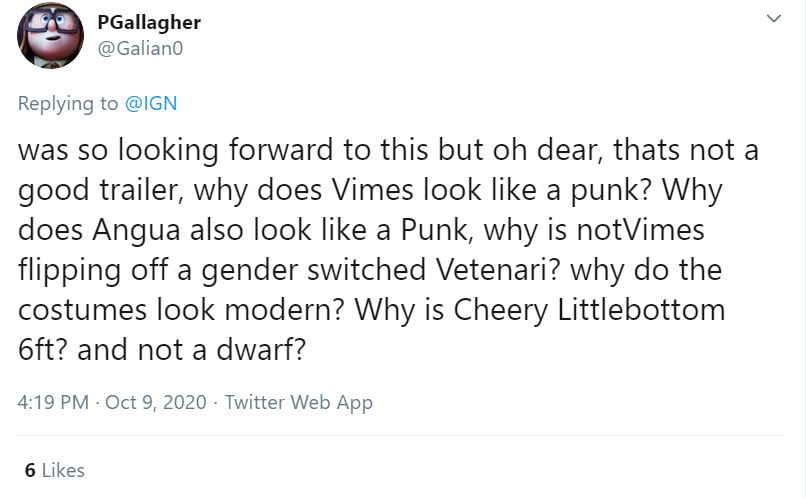 Another added, “Terry (who I knew very well years ago) was always adamant that there should be no Discworld stories he didn’t write (and finish). That was why he instructed that his hard drive be destroyed after he died. He absolutely did not want this to happen. Sadly, rights are commodities.” 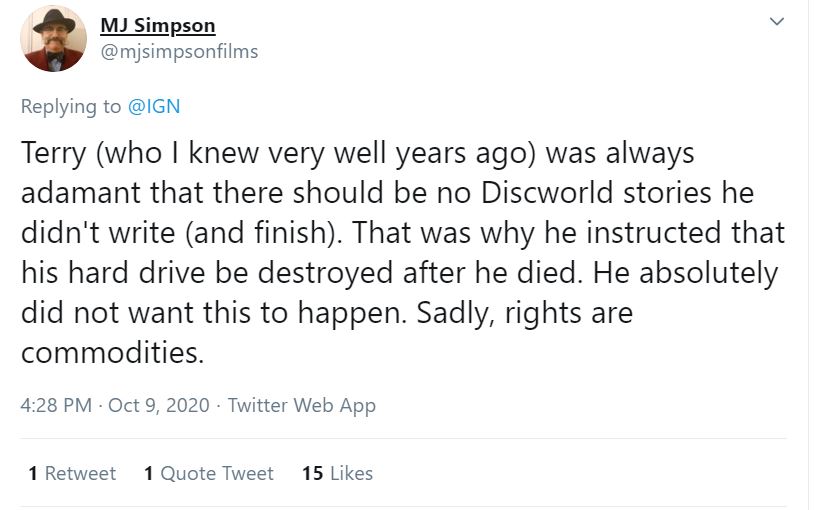 “This is not Terry Pratchetts work this is some one else’s basterdisation of it. They gave him, his work and his family the giant middle finger making this. They should have made their own show and not trampled on his work,” wrote another. 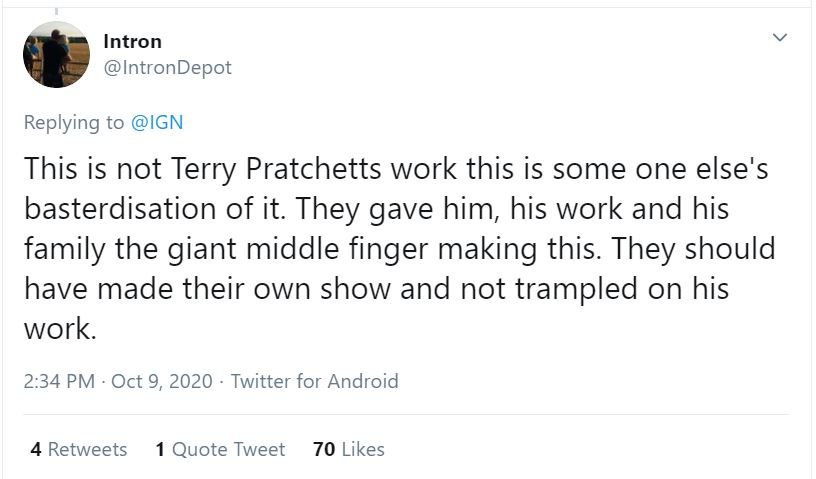 Still another wrote, “Just looking at this promo shot it’s clear that this is not representative of Prachett’s work. That’s not Lady Sybil, that’s not Sam Vimes, and that’s certainly not Cheery Littlebottom. With this so far removed from the source material I have no desire to actually watch it.” 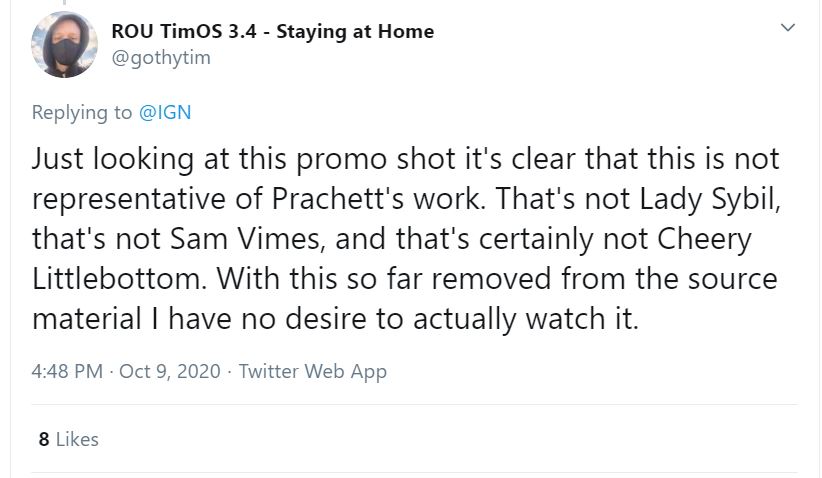 The criticism kept coming in, “Please stop using PTerry’s name to promote this. It’s been so far removed from Discworld that it really doesn’t deserve the association. I wish you well with your series but it’s really not The Watch and those characters really aren’t Vimes or Sybil. Such a wasted opportunity.” 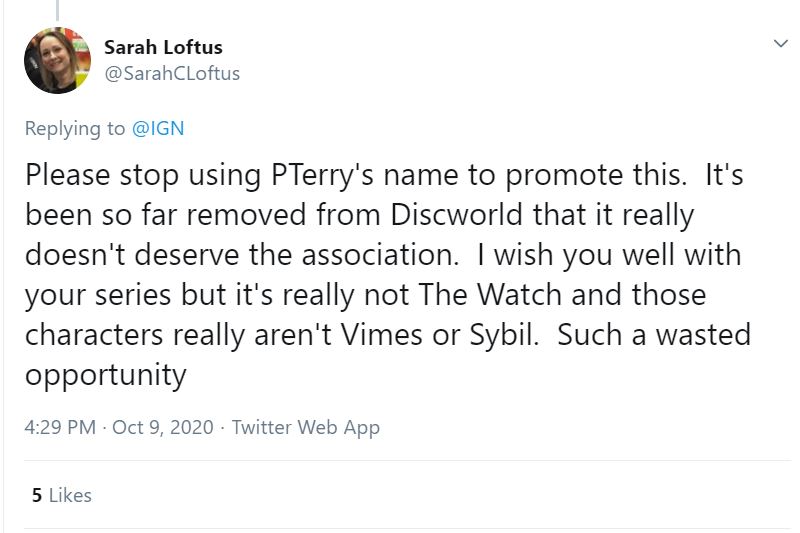 One user roasted the show with a Beatles metaphor, “This is like a beatles tribute band who call themselves john paul ringo and george but dont play ANY beatles songs instead they play hardcore viking trance metal.”

Another made it clear they have no interest in the show describing it as an “abomination.” They wrote, “Terry’s books are an absolute joy to read you are drawn into another world we’ve had various dramatisations of his works but THIS is an abomination – has ANYONE involved with the production side ever read one of his books ? Thought not …..” 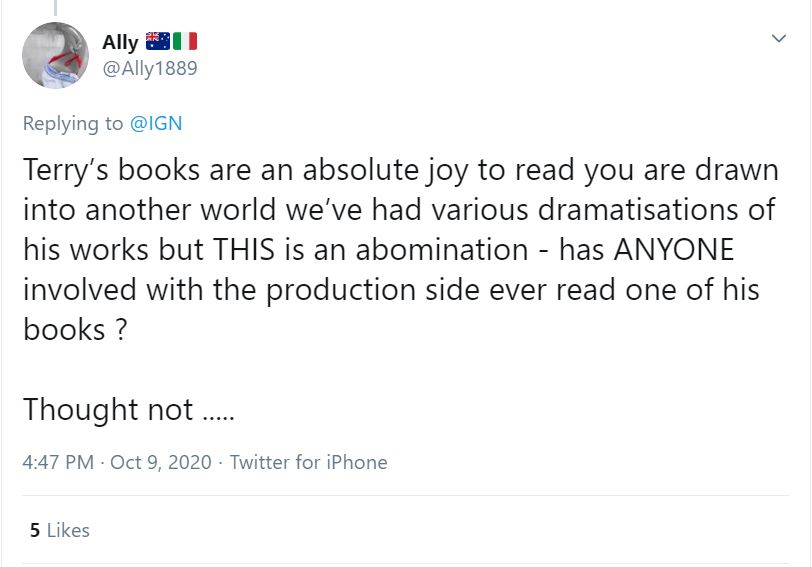 One user wrote, “To me it’s someone committing Identity Theft, if they claim these characters as Terry’s. This series is turning up at the Discworld’s funeral claiming to be the illegitimate child of it. It’s not related to it & is just after the inheritance.” 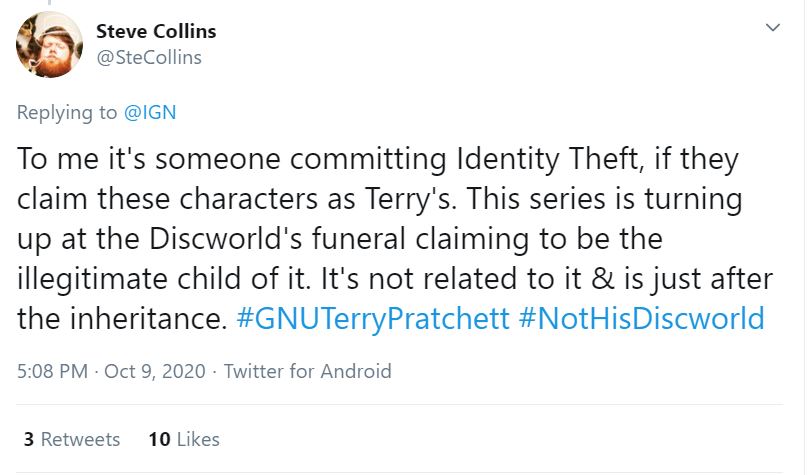 The mockery continued. One person wrote, “This is as faithful to Discworld as turning up at a Star Wars convention dressed up as an alien from Battlestar Galactica.”

Still another added, “What a steaming pile of ordure! I’m guessing they’re releasing it in the States in the hope that someone who hasn’t actually read any Discworld somehow takes a shine to it, and they can reverse it into the UK.” 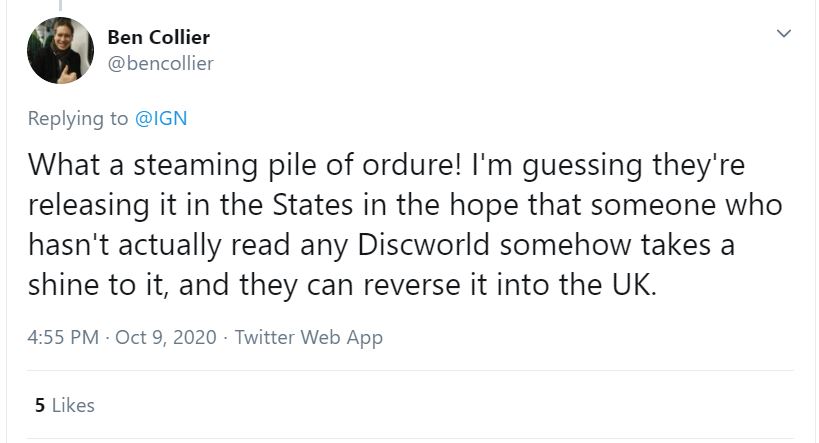 One person criticized the show for being “too American.” They explained, “Feels too American. Too rushed, taking itself too serious, and way too American. Why didn’t they get the same guys to do it who already created three WONDERFUL Discworld movies? Those felt British and ‘odd’ enough and not like another expendable teen fantasy show.” 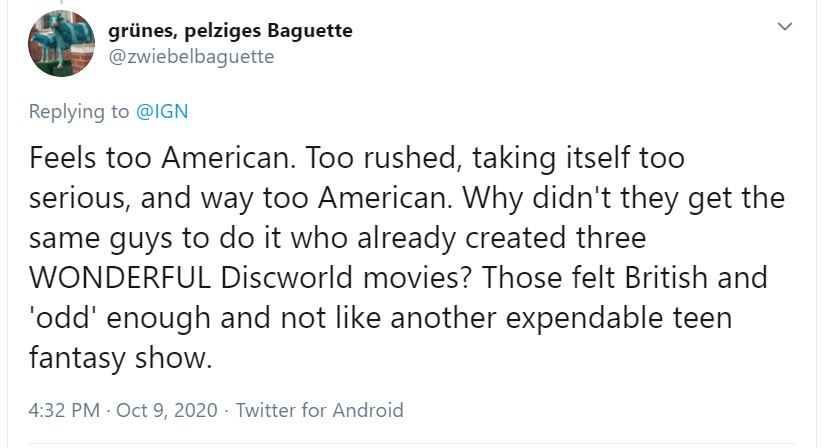 What do you make of this trailer? Do you agree with the plethora of individuals who are absolutely roasting it?