Lucasfilm and Star Wars are hard at work doing their very best to confuse all their fans by not only introducing continuity breaking Force abilities, but also changing how they originally introduce and explain them.

The latest effort is how Rey learns the Force Heal ability as seen in Star Wars: The Rise of Skywalker.

As first reported by ScreenRant, the newly published The Star Wars Book provides a brand new explanation as to how Rey learns this ability.

Lucasfilm describes the book, which is written by Pablo Hidalgo, Cole Horton, and Dan Zehr, as “an invaluable roadmap” to Star Wars.

They go on to state, “If you want to comprehend the epic and intricate Star Wars saga, this is the ebook for you. It is a unique and insightful examination of this beloved franchise.” 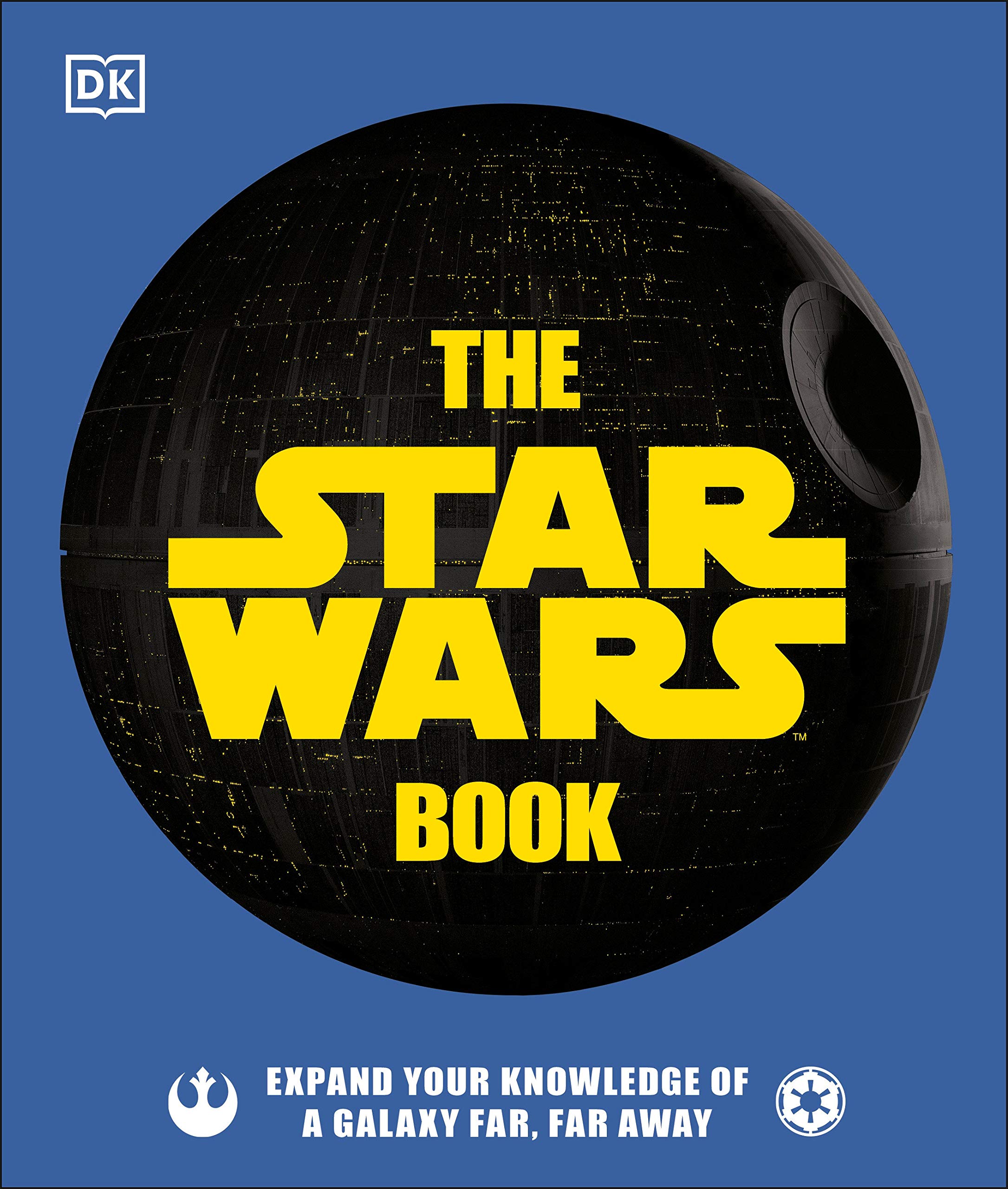 As for the revelation on Force Healing, the book reveals it is actually a Force ability connected to the Force Dyad. As described in Star Wars: The Rise of Skywalker: The Visual Dictionary, a Force Dyad is a link through the Force that connects “two individuals across space and time.”

The Star Wars Book goes on to explain how the Force Dyad is involved in Force Healing, “Those in a dyad possess another unusual ability. They can use the Force to heal a wounded person or creature, but this act also requires that the healer transfer some of their Force energy, which can temporarily weaken them.”

The book specifically claims this is the ability Ben Solo uses to heal Rey at the end of The Rise of Skywalker, “After their battle with Darth Sidious, Ben Solo sacrifices his life and all of his Force energy to bring Rey back from the dead.”

It looks like it can also do a little more than just “temporarily weaken them.”

Interestingly, this new revelation on how Force Healing works doesn’t fit into how Lucasfilm and Star Wars previously described how Rey learned the ability. In Star Wars: The Rise of Skywalker: The Visual Dictionary it is revealed Rey learns a Force Healing technique from the Jedi texts she acquired on Ahch-To.

The Visual Dictionary explains, “Rey is fascinated by the arcane healing techniques described in the Chronicles of Brus-bu, and uses the underpinnings of such teachings to heal the broken kyber crystal in her lightsaber.” 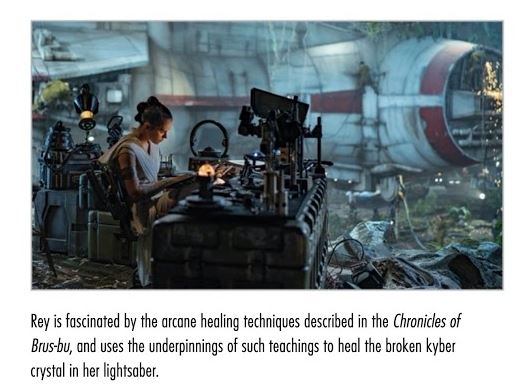 This version of how Rey learns Force Healing is also echoed in the novelization of The Rise of Skywalker.

While retelling how Rey uses Force Heal to heal the vexis, the snake like creature seen on Pasaana, author Rae Carson writes, “She was acting on pure instinct now. Rey closed her eyes. Reached for the Force. Whenever she fought, or leapt through the jungles of Ajan Kloss, or even mind-tricked a stormtrooper into releasing her shackles, she channeled the Force, using it for her own advantage in some way. But this would call for a different technique, something she’d learned from the Jedi texts when she was mending Luke’s kyber crystal. This time, she would give.”

“A hum resonated in her chest as she gathered something inside her, offered it up to the serpent. Her own energy. Her own life. It was part of the Force, too, and she didn’t have to keep it all to herself. She felt the vexis calming. Its pain was receding,” Carson continued.

Rey would later explain, “I just transferred a bit of life. Force energy, from me to him.” 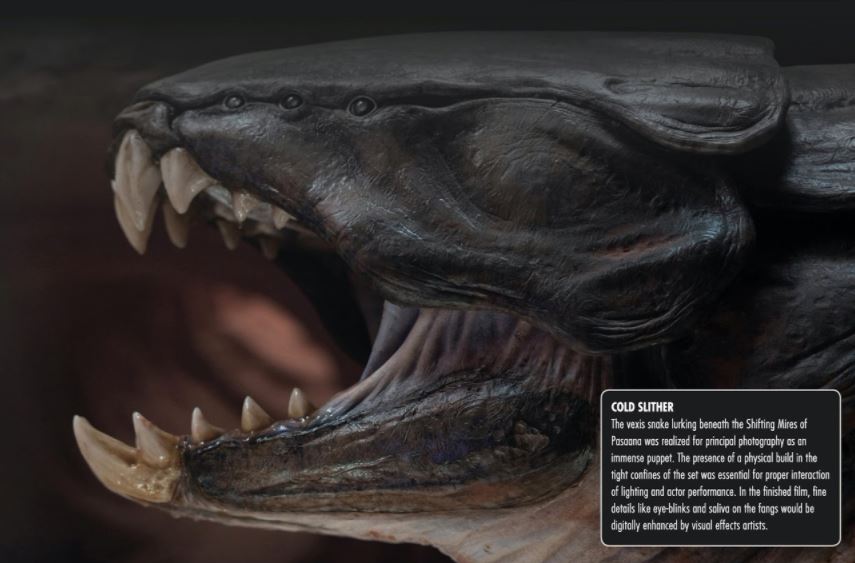 Carson would later reveal that this healing of the Vexis actually somehow opened up new avenues in the Force like a skill tree in a RPG.

She explains, “Healing the vexis had exhausted her, but it had also opened up new avenues of the Force to her – something about both giving and taking, about a more perfect oneness than she’d understood before. She yearned to talk it over with Leia.”

In fact, when she heals Kylo Ren, Rey not only draws on her own life force, but the life teaming in the ocean around her.

Carson writes, “Rey drew on everything around her-so much life in that violent ocean!-but mostly she drew on herself. She gave.”

No mention of Rey being part of a Force dyad is mentioned in connection with her ability to be able to use Force Healing. Both the novel and The Visual Dictionary state it’s from her knowledge of the Jedi texts.

Maybe more importantly, is if The Star Wars book’s version is correct then that would mean that The Child or Baby Yoda in The Mandalorian, who has also shown an ability to Force Heal, must be part of a Force dyad years before Rey and Kylo Ren.

And if The Star Wars book’s version is wrong then it still fails to address how The Child knows this ability that was supposedly lost to the Jedi and stored in these Jedi texts only to be rediscovered and applied by Rey.

And I would be remiss to indicate that the actual introduction of the ability in both The Rise of Skywalker and The Mandalorian denigrates Anakin Skywalker’s turn to the Dark Side. A turn that is specifically motivated by his fear of losing Padme to death as seen in Revenge of the Sith. A fear that would not exist if he had the ability to Force Heal and transfer his life force to Padme.

Darth Sidious tells Anakin, “Become my apprentice. Learn to use the Dark Side of the Force.”

Anakin responds, “I will do whatever you ask. Just help me save Padme’s life. I can’t live without her.”

Sidious responds, “To cheat death is a power only one has achieved, but if we work together, I know we can discover the secret.”

Anakin then states, “I pledge myself to your teachings.”

But maybe more importantly, the introduction of Force Healing and how it used in The Rise of Skywalker actually goes against Jedi teaching around death.

Yoda tells Anakin, “Fear of loss is a path to the Dark Side… Death is a natural part of life. Rejoice for those around you who transform into the Force. Mourn them do not. Miss them do not. Attachment leads to jealousy. The shadow of greed that is.”

The Jedi Master then instructs Anakin, “Train yourself to let go of everything you fear to lose.”

Again, Lucasfilm and Star Wars reveal that they truly have no understanding of The Force with the introduction of Force Healing and on top of that they can’t even keep their story straight when it comes to Force Healing in both how it works and how Rey learns to use it.

What do you make of this new retcon of Force Healing?