Marvel Comics’ latest Darth Vader comic by Greg Pak and artist Raffael Ienco sees Emperor Palpatine aka Darth Sidious torturing his apprentice while mocking him over the Chosen One prophecy. 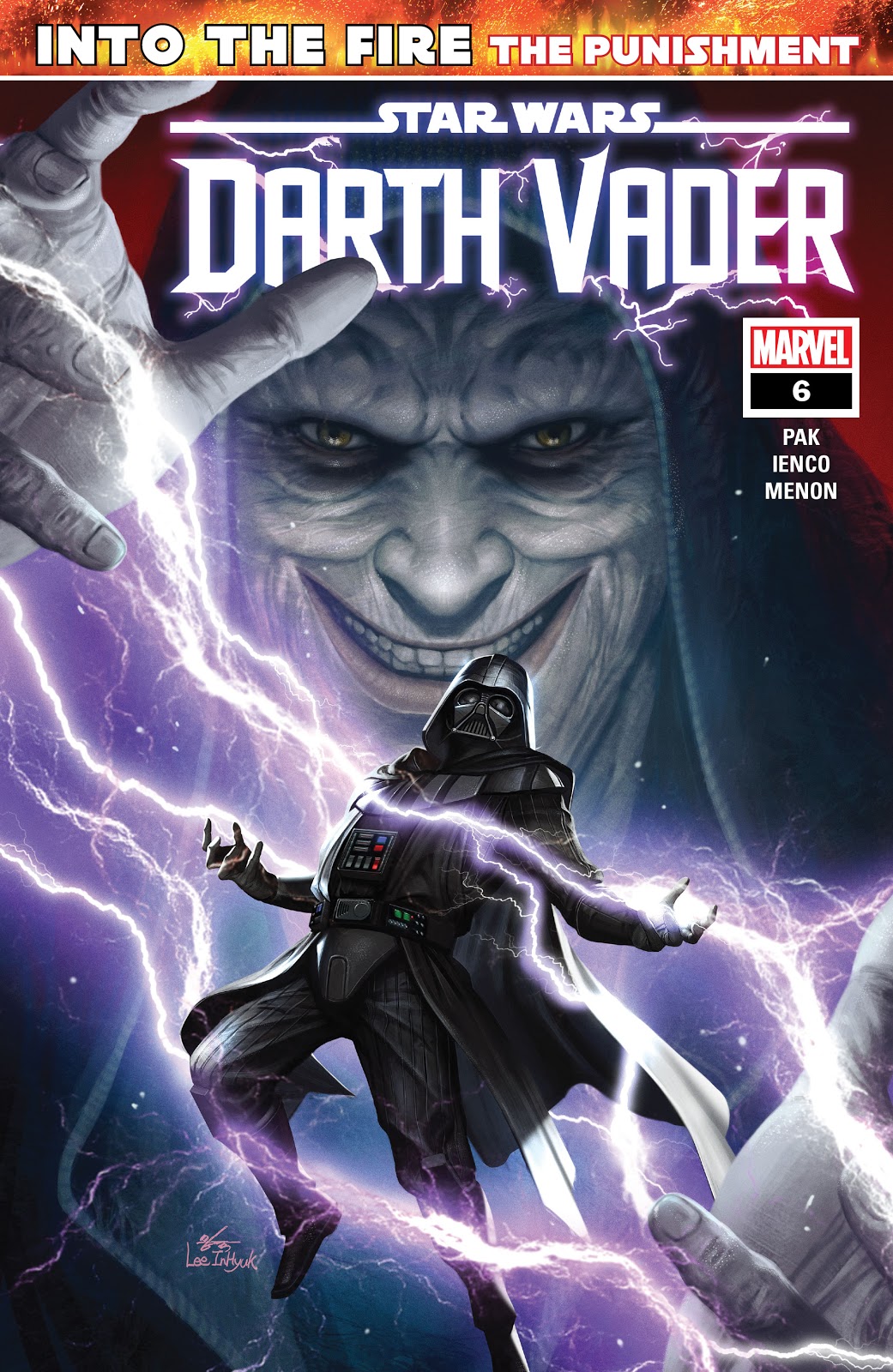 Darth Vader #6 takes place between the events of The Empire Strikes Back and The Return of the Jedi.

It sees Sidious displeased with his apprentice after he failed to turn Luke Skywalker to the Dark Side and then on top of that Vader failed to report to the Emperor. Instead he tracked a group of rebels led by an imposter of Padme Amidala, whom he allows to escape.

Palpatine viciously punishes Vader, shocking him with Force Lightning and then allowing his royal guards to beat and shock him with their staff weapons.

However, Vader eventually overcomes the royal guards and begins to turn the tide, Force Choking both the guards and Sidious’ vizier. 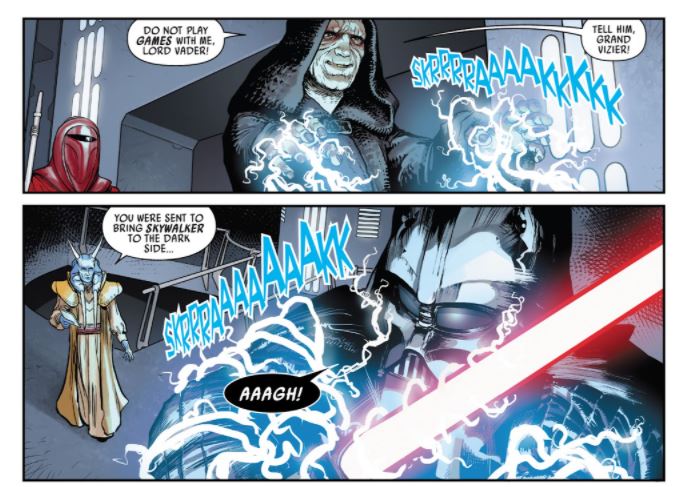 Before he can finish them off, Sidious intervenes and applies his own Force Choke to Vader. It’s then that he mocks the prophecy of the Chosen One.

Sidious tells Vader, “How does it feel Lord Vader to be so weak? To feel such pain? To know such fear?”

The Emperor continues, “But how can this be? You were the chosen one, were you not? Destined to bring balance to the Force!”

“But who chooses the chosen one? And why could they not choose another? You are but a tool, Lord Vader…” 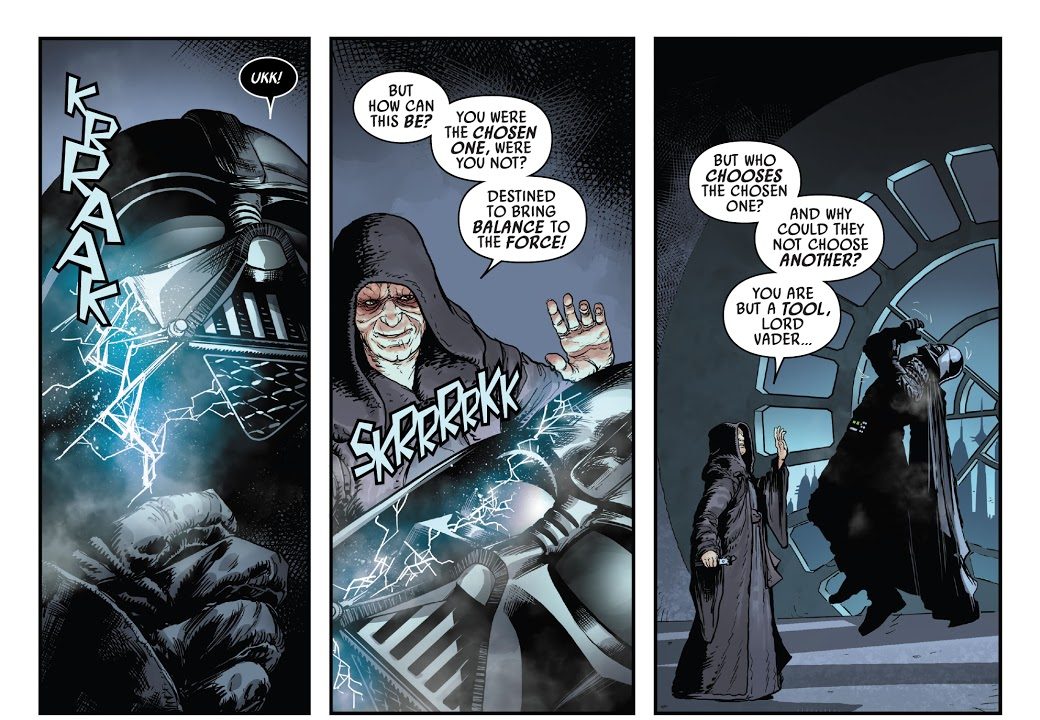 This contradicts the events of Revenge of the Sith, where Sidious implies that he believes Anakin is indeed the Chosen One.

When Sidious completes Anakin Skywalker’s turn to the Dark Side, he tells him, “You are fulfilling your destiny, Anakin. Become my apprentice. Learn to use the Dark Side of the Force.”

Sidious’ reference to Anakin’s destiny is a reference to earlier in the film when Mace Windu, Obi-Wan Kenobi, and Mace Windu are discussing Skywalker.

Obi-Wan states, “With all due respect, Master. Is he not the Chosen One? Is he not to destroy the Sith and bring balance to the Force?”

Windu responds, “So the prophecy says.” Yoda then adds, “A prophecy misread could have been.”

Revenge of the Sith then goes on to show Anakin destroying the Jedi at the Jedi Temple and wiping out the Younglings. He’s eventually tasked with forming the Inquisitorius and hunting down any Jedi who might have survived Order 66.

However, this new comic seems to imply that Sidious might actually be the originator of the prophecy and that he is the one who created it and had been manipulating it from the beginning.

It seems to feed off a fan theory that Sidious used the Dark Side of the Force to impregnate Shmi Skywalker leading to Anakin’s birth. That fan theory would be given credence when writer Charles Soule depicted it in Darth Vader #25 as a Dark Side Force vision of Vader’s. 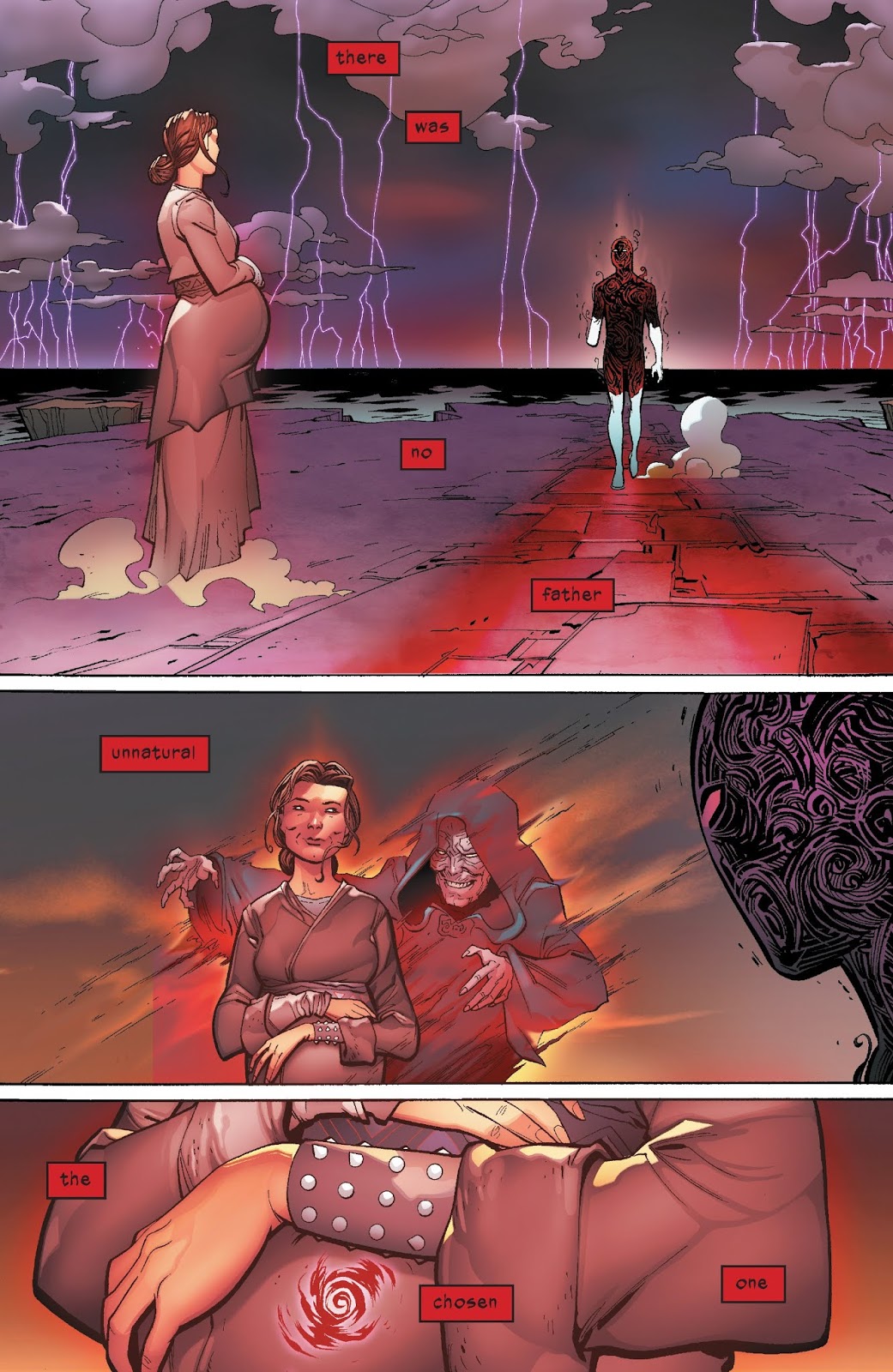 However, Sidious is not the originator of the prophecy. We know this because The Clone Wars animated show also examines the Chosen One prophecy and confirms that Anakin is indeed the Chosen One.

The Father tells Anakin, “The Chosen One will remain to keep my children in balance.” He adds, “But leave and your selfishness will haunt you and the galaxy.”

The Father is a much more ancient being than Sidious and predates him. To imply that Sidious is the originator of the prophecy doesn’t make sense at all given the Father knows about the prophecy and confirms that Anakin is the fulfillment of it.

But maybe what’s more insidious about having Palpatine try and claim that he’s the originator of the prophecy and could even create more Chosen One’s is the fact that it tries to give credence to the abomination that is The Rise of Skywalker and Palpatine’s survival following The Return of the Jedi.

It implies that Palpatine can create more Chosen Ones and that Rey was somehow part of his plans to create more chosen ones. 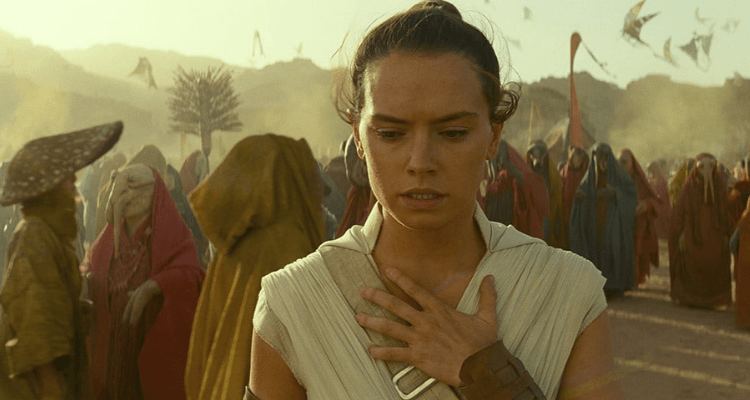 Remember, Star Wars: The Rise of Skywalker revealed that Rey is a descendant of Palpatine. In fact, the novelization of the film reveals she’s the daughter of a clone of Palpatine.

This is simply not true. Rey is not the Chosen One.

George Lucas explains, “The story will become very clear that Anakin is the Chose One.”

He adds, “And even when Anakin turns into Darth Vader, he is still the Chosen One.”

“So the prophecy is true and by doing that he redeems himself and goes from being Darth Vader back to being Anakin again,” Lucas added.