Star Trek: Picard actress Michelle Hurd recently claimed that the apparent LGBTQ relationship between her character Raffaela Musiker and Jeri Ryan’s Seven of Nine stemmed from a comic con photo of the two together.

Viewers of Star Trek: Picard were teased that Musiker and Seven of Nine had romantic feelings during the show’s season 1 finale, where the two are seen holding each other’s hands onboard the La Sirena.

Actress Jeri Ryan would seemingly confirm the relationship on Twitter responding to a fan with a rainbow flag when she was asked, “Are we officially getting Seven apart of the fictional character rainbow flag family?” 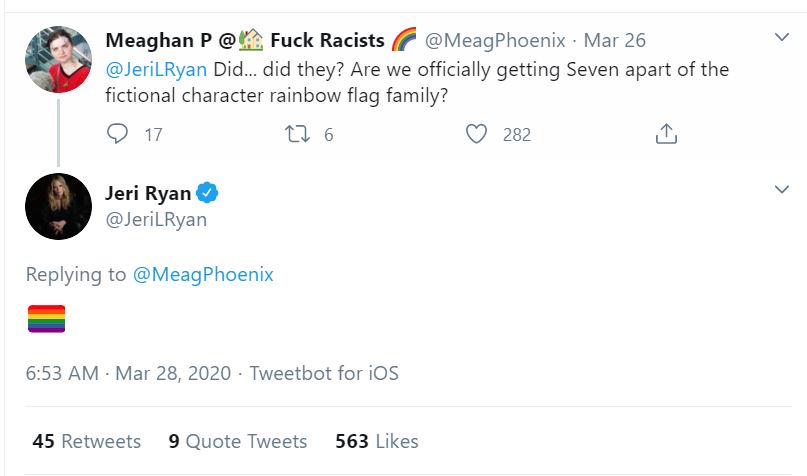 Now, Michelle Hurd has told ScreenRant that she knew this scene was coming. She explained, “We kind of knew it was coming. Our writers are so phenomenal. The whole world of Star Trek is that all of our writers and producers and everyone involved is receptive to the world, right? To what’s happening in the world, and what’s happening to that, and they put it in the scripts.”

She then reveals the entire idea of hinting that Seven of Nine and Raffi are in relationship came from a comic con photo of Hurd and Jeri Ryan together.

Hurd stated, “And I will say that we were all at a comic con and Jeri [Ryan] and I were just hanging out, and one of our cast members took a picture of us. We were both looking good, whatever, and [the photo] goes back to our producers and writers and literally, you could just see them looking at that picture and they were like [makes whispering sounds]. It just made them go, ‘Wait! This could be a possibility.’ So they sort of floated it to us and we were like, ‘all good!'” 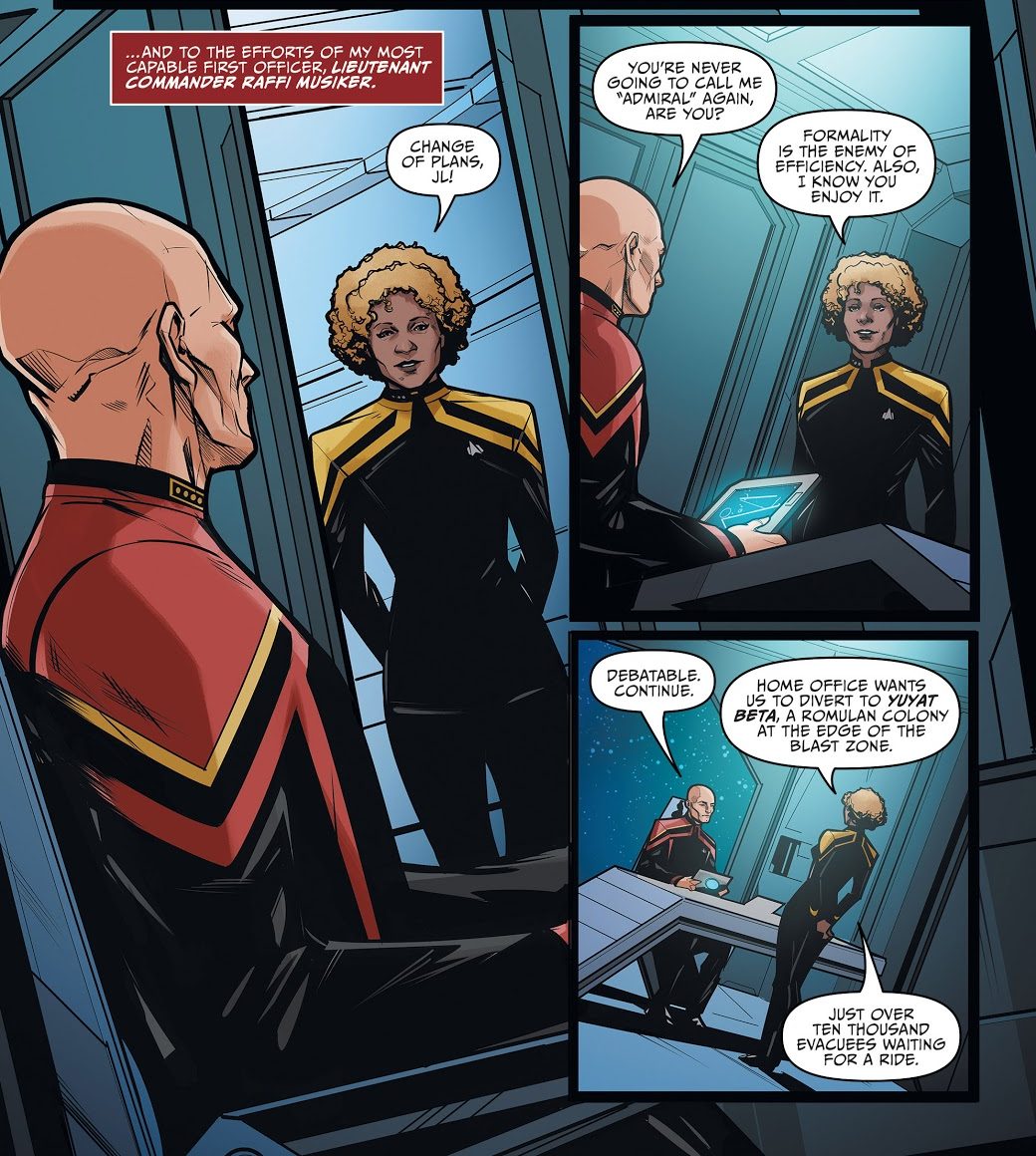 You can see the excerpt from Google Books below.

As for Seven of Nine, she previously went on a date with William Chapman. However, the date ended in failure after she tore a ligament in his shoulder while dancing.

She also was romantically involved with a man named Axum while she was still a drone within the Unimatrix Zero.

Maybe her most significant romance was with Chakotay. First, she went on multiple dates with a simulated version of Chakotay. However, she would eventually strike up a romance with the real Chakotay. 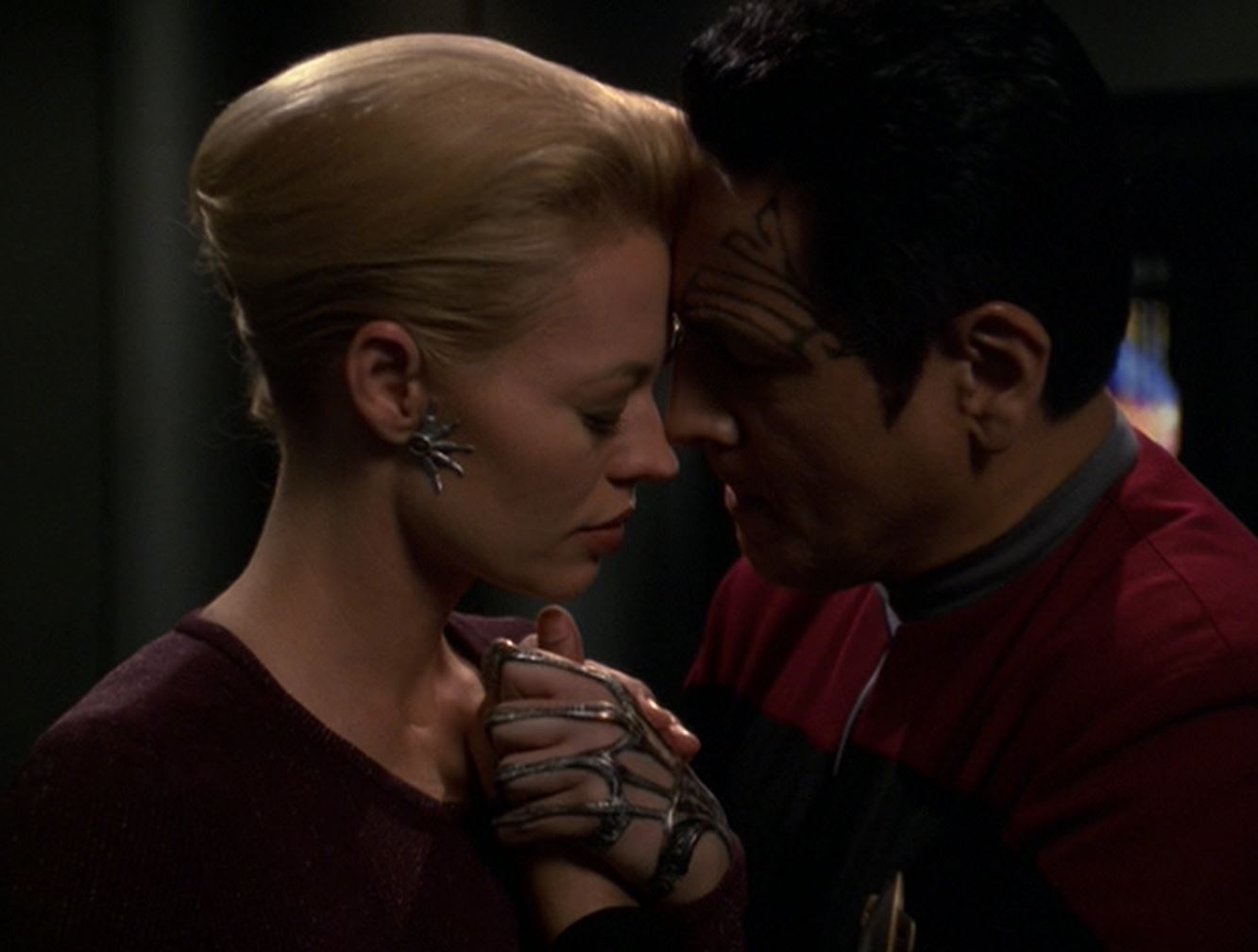 In fact, it would be revealed that in an alternate timeline that her and Chakotay actually got married.

As for the idea of Seven of Nine being a lesbian or bisexual, it’s not a new idea. Star Trek: Voyager scriptwriter Jeri Taylor reportedly told TV Guide in 1998 that her character wasn’t a lesbian but also stated that it “is something I am absolutely sympathetic with and I have tried several times to do it.”

What do you make of Hurd’s recent comments that the apparent LGBTQ relationship between Raffi and Seven of Nine is based off a picture from a comic con?