In Synchronic, Dennis (Jamie Dornan) and Steve (Anthony Mackie) are best friends and paramedics. They’ve known each other for a long time and have ridden together in the back of an ambulance for as long as they can remember.

Steve relies on alcohol and recreational drugs to keep him going. He sleeps around and doesn’t commit to anything other than the splitting headaches he has on a daily basis. Steve would kill to have what Dennis has. His situation worsens when he discovers that he has an inoperable brain tumor and only six weeks to live.

Every call Dennis and Steve are sent out on throughout the film is based on injuries sustained while the victims were on a new designer drug called Synchronic. When Brianna disappears after taking Synchronic while over at a friend’s house, Steve takes it upon himself to go after her only to discover that Synchronic allows its user to travel back in time for seven minutes.

Writers and directors Justin Benson and Aaron Moorhead have made films revolving around intriguing concepts the past 5-6 years. Spring is a romantic body horror and The Endless felt like one of the better X-Files episodes.

Synchronic allows drug users to travel through time resulting in most encounters with the past being violent or deadly. Synchronic has an incredible concept, but chooses to explore everything around that concept instead. 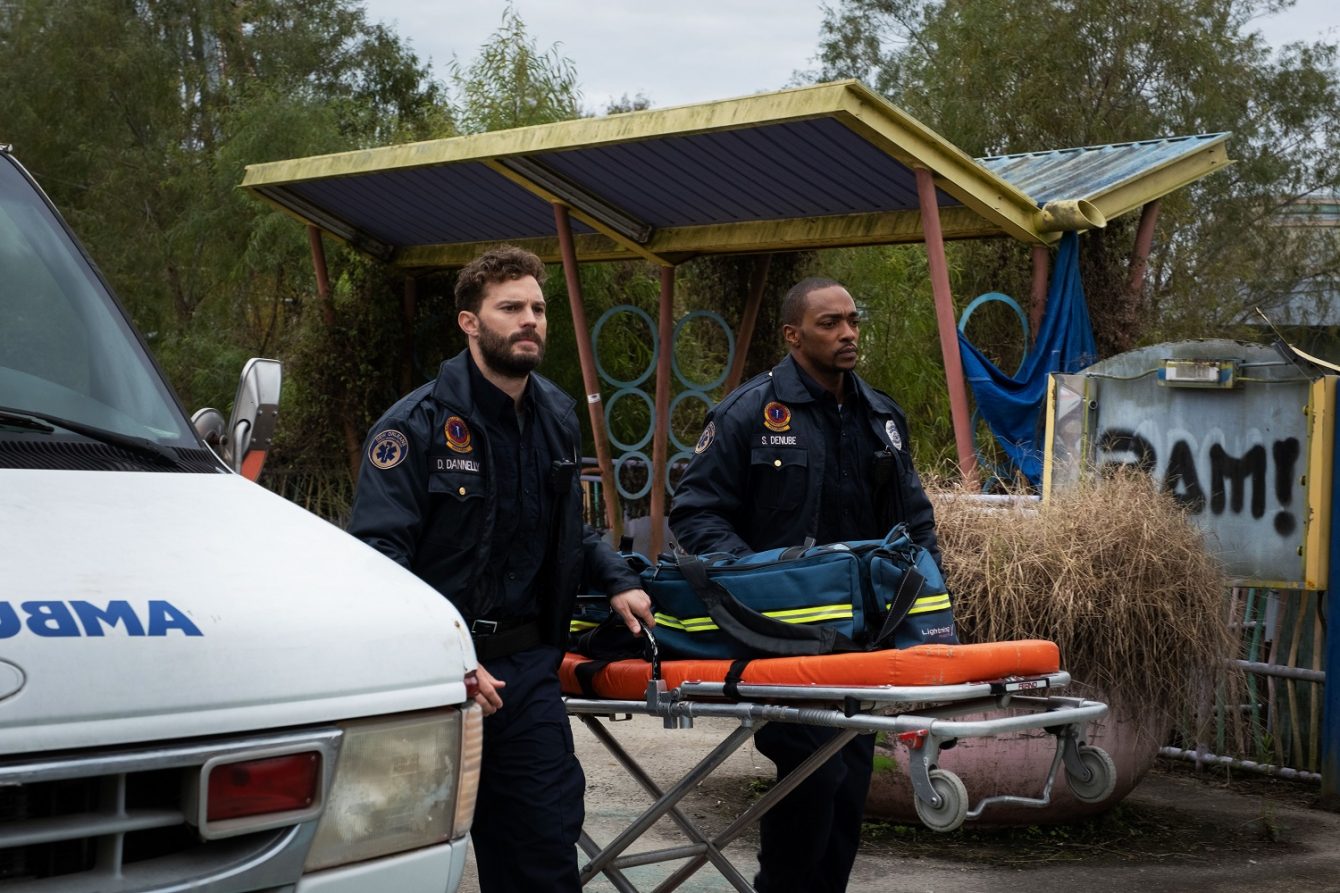 Jamie Dornan and Anthony Mackie as Dennis and Steve in Synchronic.

The chemistry between Jamie Dornan and Anthony Mackie essentially gives Synchronic a buddy cop dynamic. They bicker and fight and hate each other at times, but they also know each other better than anyone else. The two of them are basically brothers. Steve has a devastating connection to Hurricane Katrina that involves his deceased family, but the two of them have this undeniable connection.

Steve deals with radiation treatment and one night stands while Dennis is forced to deal with his missing daughter and a wife that may divorce him because of their oldest daughter now being gone. Together they save people and vent their problems to one another over a beer. In the world of Synchronic, Steve and Dennis are better together than they are apart. 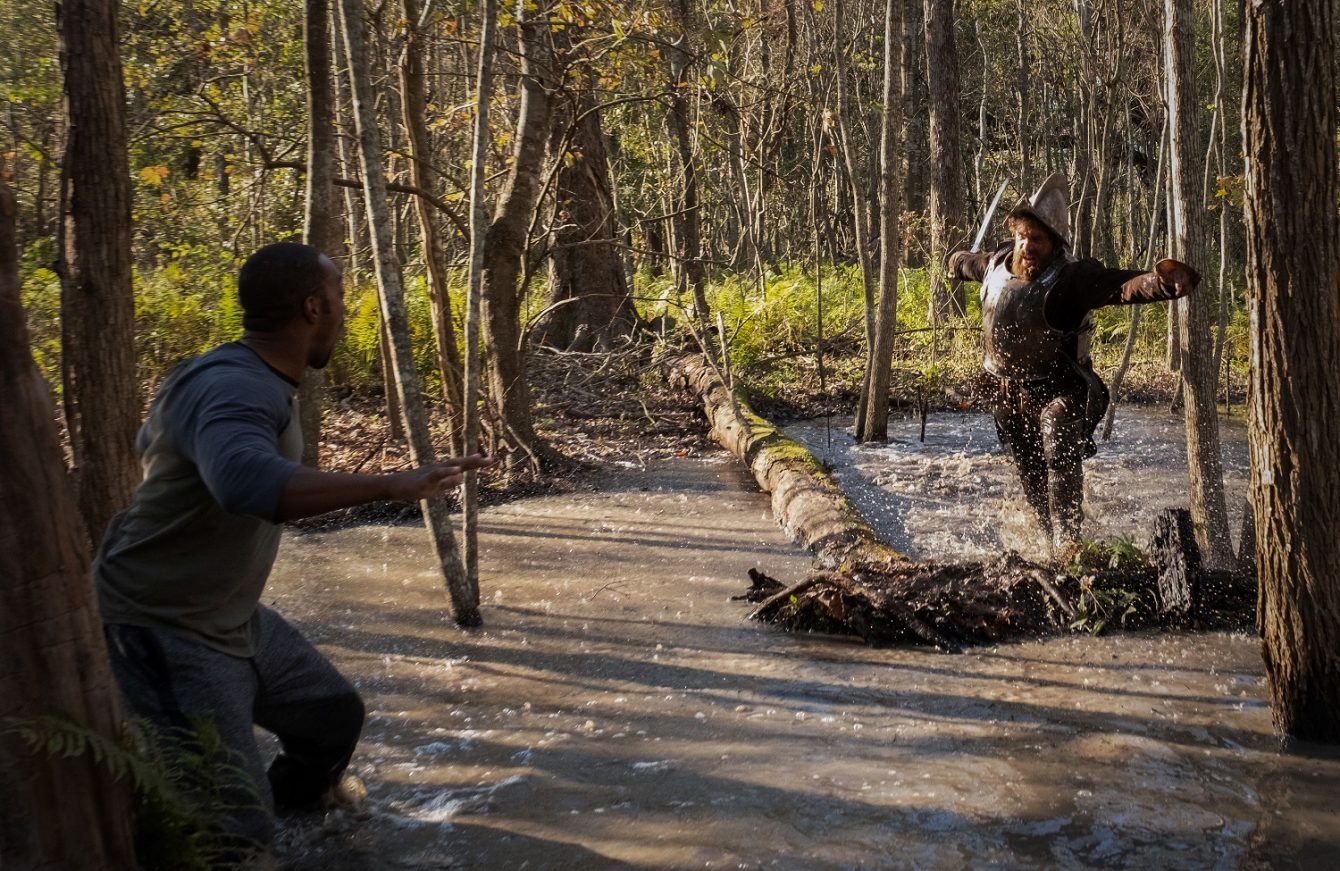 Steve Denube (Anthony Mackie) has troubles in the past in Synchronic.

Steve’s trials and tribulations of the effects of the drug are the highlight of the film. His trips to the past, the rules he comes up with, and the inevitable consequences that develop are all clever and fascinating. The downside of Synchronic is that you don’t really care about any of the characters. Brianna has two brief scenes before she disappears and Dennis is too self-infatuated with complaining about his family to care about when his daughter goes missing.

You feel some sympathy for Steve given how difficult it must be to try to live with chemo as part of your everyday life, but again you don’t really have that connection to the characters. Synchronic is an interesting journey, but the audience doesn’t care about the fate of these characters.

Steve’s expeditions to the past are also almost all involving racist individuals; a conquistador, a confederate, and a cult. The only character from the past Steve gets along with is a caveman. It’s sad, in a sense, since Synchronic seems to hint at humanity getting tainted over the years and was more pure when it first began compared to how it evolved; not necessarily what it evolved into.

The special effects are a bit clunky at first, as well. The opening sequence is the introduction to the effects of the drug, but it’s mostly executed as cheap green screen effects. Once Steve starts going back in time though it’s as if the special effects just needed a trial run. Steve’s dissolve from the present to the past always looks better in comparison.

The sci-fi horror film incorporates some impressive nonlinear storytelling. Synchronic shows its audience certain scenes in the first half of the film and chooses to not reveal that those scenes were only fragments of lengthier conversations and larger sequences later on.

Despite a young girl disappearing and a main character having cancer, Synchronic has no emotional value whatsoever. The events that unfold throughout the film never feel more than one-dimensional because of it. A time travel designer drug is such a cool concept and Anthony Mackie in particular gives a worthwhile performance, but Synchronic leaves you feeling lethargic thanks to its inability to fully captivate its audience.

Synchronic is now playing in theaters and drive-ins.