A new interview from George Lucas sees the creator of Star Wars reveal his plans for a sequel trilogy that would involve Darth Maul.

This new interview will soon be published in Star Wars Archives: Eps I-III: 1999-2005 by Paul Duncan. 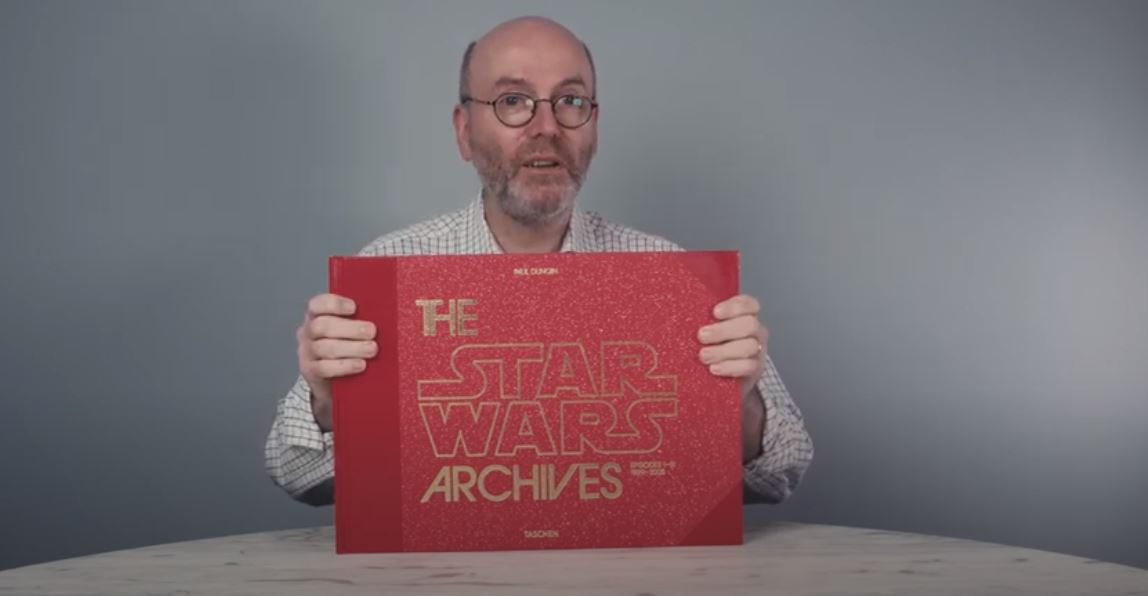 In fact Duncan is promoting the book by detailing that it reveals Lucas’ plans for his sequel trilogy.

On Twitter, Duncan wrote, “George Lucas’ plan for the sequel trilogy included: Darth Maul and Darth Talon as the villains; Luke rebuilding the Jedi Order from survivors of Order 66; Leia forming the New Republic, becoming the Chosen One.” 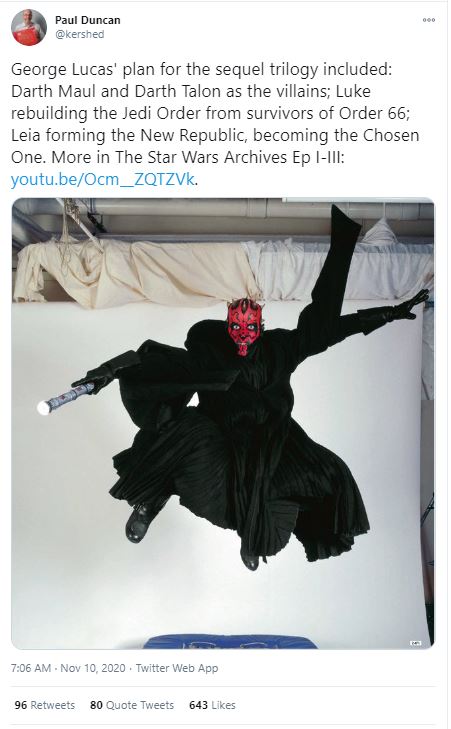 In a YouTube video showing off the book, Duncan reveals it has a foreword by George Lucas. However, he’s mum on Lucas’ plans for a sequel trilogy.

He states, “[Lucas] talks a little bit about his ideas, a few of his ideas for the third trilogy. But if you want to find that you’re going to have to get Star Wars Archives Episode I-III: 1999-2005.

While Duncan was mum in his YouTube video, an excerpt from Lucas’ interview about his ideas for the sequel trilogy has made its way online.

Reddit user bothanspy89 shared a screen shot from the book to the StarWarsLeaks subreddit.

The excerpt seen below sees Lucas explain that “Darth Maul trained a girl, Darth Talon, who was in the comic book as his apprentice. She was the new Darth Vader, and most of the action was with her. So these were the two main villains of the trilogy. Maul eventually becomes the godfather of crime in the universe because, as the Empire falls, he takes over.”

Lucas went on say, “The movies are about how Leia – I mean, who else is going to be the leader? – is trying to build the Republic. They still have the apparatus of the Republic but they have to get it under control from the gangsters. That was the main story.”

Lucas then detailed, “It starts out a few years after Return of the Jedi and we establish pretty quickly that there’s this underworld, there are these offshoot stormtroopers who started their own planets, and that Luke is trying to restart the Jedi. He puts the word out, so out of 100,000 Jedi, maybe 50 or 100 are left.”

“The Jedi have to grow again from scratch, so Luke has to find two- and three-year-olds, and train them. It’ll be 20 years before you have a new generation of Jedi,” Lucas explained.

He then described what Star Wars would look like following this trilogy, “By the end of the trilogy Luke would have rebuilt much of the Jedi, and we would have the renewal of the New Republic, with Leia, Senator Organa, becoming the Supreme Chancellor in charge of everything. So she ended up being the Chosen One.” 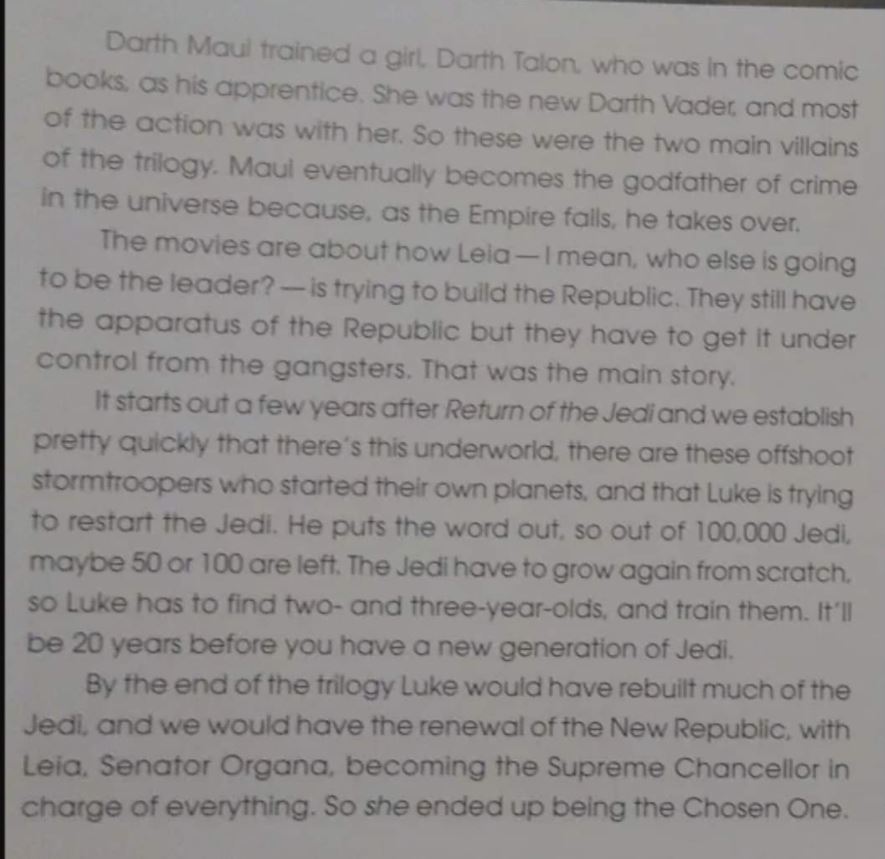 As Lucas notes in the interview, Darth Talon was introduced in the comics. She was a female Twi’lek who originally apprenticed under Darth Ruyn in the Star Wars Legacy series published by Dark Horse Comics back in 2006. 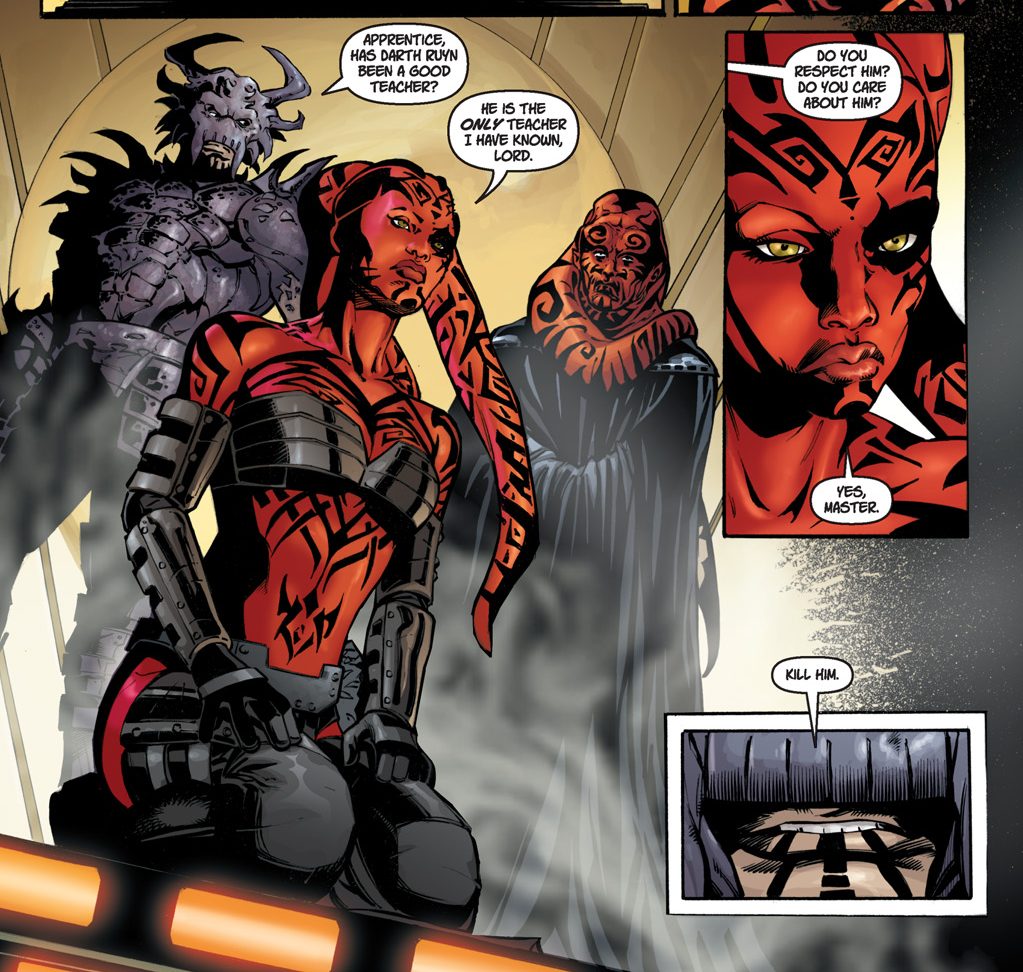 In the second issue of the series, Talon is presented to the leader of the Sith, Darth Krayt, who instructs her to kill Darth Ruyn. She complies and receives the name of Darth Talon.

Not only does she receive the name of Darth Talon, but she is also assigned her first mission. She is tasked with tracking down the daughter of Emperor Roan Fel, Princess Marasiah, and her protector the Imperial Knight Elke Vetter.

Talon hopes to use the princess to lead her to her father so that she can assassinate him. 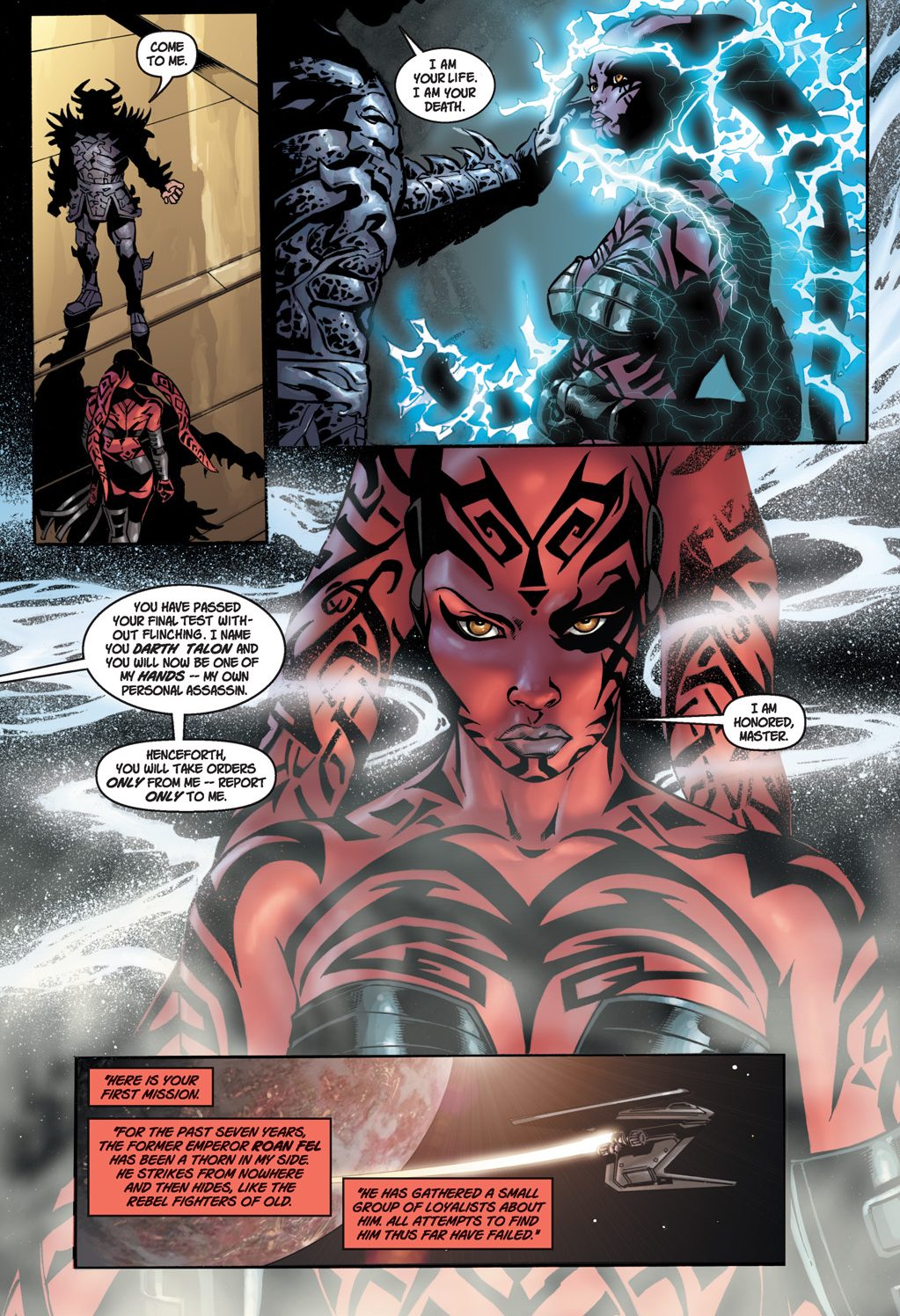 While Darth Talon might have been the apprentice of Darth Krayt in Dark Horse’s Legacy series, the story of a never-made Darth Maul game by Red Fly indicated Lucas had indeed envisioned Darth Maul and Darth Talon together.

Game Informer reported back in 2015 that Lucas met with Red Fly and detailed that Maul and Talon were “friends.” Their source explained that Lucas “wanted these characters to be friends, and to play off of each other. He talked about the show Burn Notice as a reference point. He likened Darth Maul to Sonny from The Godfather, and he likened Darth Talon to Lauren Bacall.”

The source added, “He actually did an impersonation of her. It was supposedly the weirdest impersonation of a ’40s actress going, ‘Don’t you know how to whistle? Put your lips together and blow.’”

As readers of the Legacy series know it was set 125 years after the deaths of both Emperor Palpatine and Darth Vader. That would mean there was a pretty significant time gap between Maul and Talon. 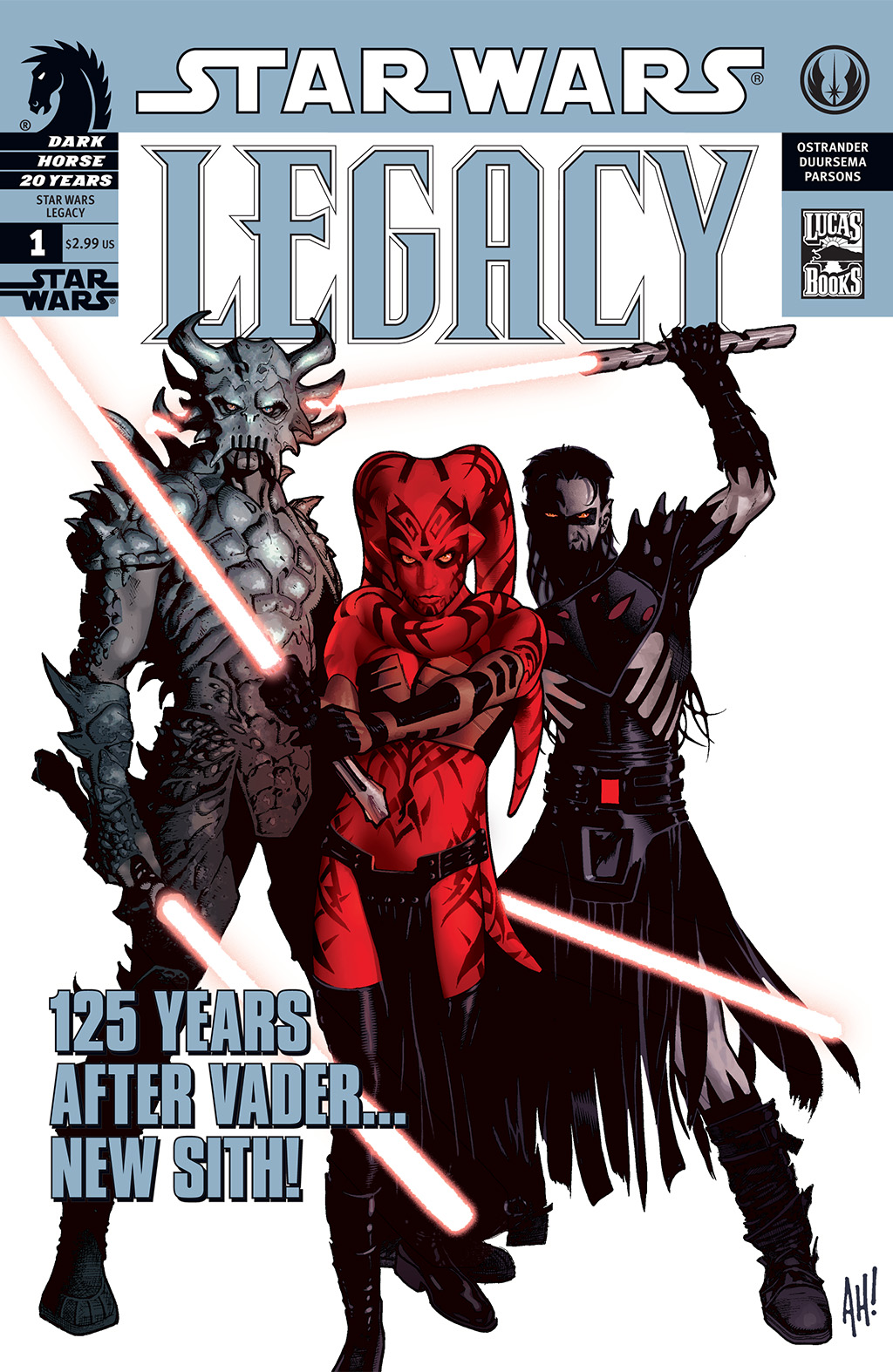 However, as Game Informer reports this time gap was brushed off by Lucas. They reported, “When this vast time divide was brought up to Lucas’ attention, he brushed off the notion of it not working, and said that it could instead be a descendant of Darth Maul or a clone of him.”

Darth Talon wasn’t the only character from Legacy that would be joining the game. Concept art obtained by Game Informer also showed off Darth Krayt, Darth Talon’s master in the Legacy comics.

This new interview isn’t the only time that Lucas has discussed his plans for a sequel trilogy. Speaking with James Cameron for his book James Cameron’s Story of Science Fiction, Lucas described his vision for the Force and that his sequel trilogy would explore a “microbiotic world.”

He explained, “[The next three Star Wars films] were going to get into a microbiotic world. But there’s this world of creatures that operate differently than we do. I call them the Whills. And the Whills are the ones who actually control the universe. They feed off the Force.”

As for Lucas claiming Leia is the Chosen One, this is different from what he’s stated in the past.

Lucas previously explained, “The story will become very clear that Anakin is the Chosen One.”

He added, “And even when Anakin turns into Darth Vader, he is still the Chosen One.”

Finally he stated, “So the prophecy is true and by doing that he redeems himself and goes from being Darth Vader back to being Anakin again.”

What do you make of Lucas’ plans for Darth Maul, Darth Talon, Leia, and Luke? Would you be interested in seeing this story?